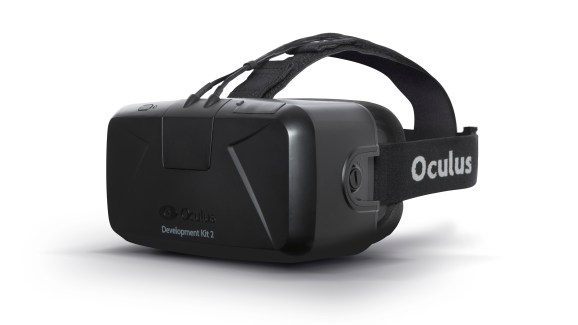 Oculus Rift's second development kit, which has many of the features consumers will end up using.

Facebook’s virtual-reality company is sending out the first wave of its latest development kits, so it’s time to stare out your window and wait for the FedEx delivery person.

After months of presales, Oculus VR is finally putting its dev kit version 2.0 in the mail (as first spotted by Gigaom). Anumber of developers and hobbyists who preordered it are getting email confirmations that their VR head-mounted displays are on the way. Over the last year, the Facebook subsidiary has revealed the new version of the kit, which runs at a higher resolution and features improved motion-tracking capabilities compared to the early developer version. Now, people will finally get a chance to start making software for the upgraded technology. This is the latest step in the company’s march toward a consumer release — which will work a lot like this latest developer version — that will launch later this year or in early 2015.

Oculus VR has already sent out thousands of development kits for its Oculus Rift virtual-reality headset, but those are older, less-capable devices. The dev kit 2, as the company calls it, has a screen with 1,080 horizontal lines of resolution — just like most modern televisions. It also uses an external camera to track infrared dots on the device to translate player motion into a game. These features increase the sensation that you are really present in a simulation.

Facebook purchased Oculus VR for $2 billion earlier this year, but the social network is letting the VR mavericks run as an independent operation. Mark Zuckerberg, Facebook’s CEO, sees virtual reality as the next computing platform after mobile and PC, and he’s putting money into the project to ensure that his company gets in on the ground floor.