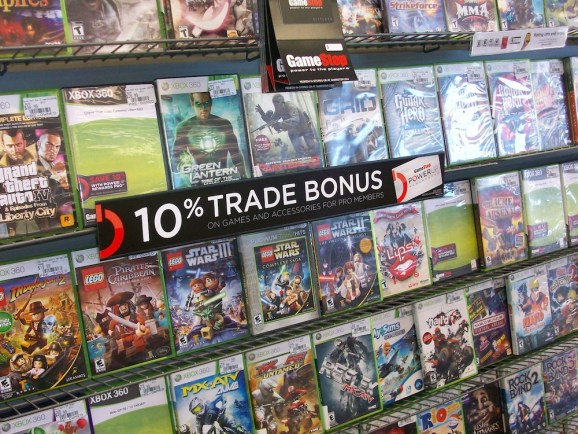 GameStop says most people don't know they can trade their games for credit.

When you think of retailer GameStop, you probably immediately picture shelves filled with new games, associates asking you to preorder upcoming releases, and used games. Here’s the crazy thing, though (as the retailer tells us): Most people who go to GameStop don’t realize they can trade in their games.

GameStop president Tony Bartel told GamesBeat that while the hardcore PlayStation, Xbox, and Nintendo crowds think of GameStop as a place where they can trade in their old games, a huge number of customers don’t even realize that is an option. With GameStop finding ways to make big bucks from selling digital products at its brick-and-mortar retails stores, this is one area where it still has plenty of room to squeeze growth from its traditional business.

“The biggest opportunity with trades is awareness,” Bartel told GamesBeat. “Believe it or not, only 40 percent of the people who walk into a GameStop store today know that we accept trades of games.”

The GameStop executive also notes that even fewer people realize that they can trade in their old iPhones, tablets, and other gadgets for in-store credit as well.

Trade-ins are one of GameStop’s main business pillars. It enables people to trade in old games, hardware, and smart devices that they no longer use or want for credit that is applicable to anything in a GameStop store. The retailer then goes on to sell these second-hand products as “preowned” at a discounted rate compared to the new game or hardware.

“The way our people look at it is [that] it’s another form of currency,” said Bartel. “We see it as a way to affordably get the games that you really want.”

Annually, GameStop saw $1.2 billion in trade credit spent on game-related products in its stores. While some developers and publishers have voiced concerns that those used games discourage people from purchasing full-priced new software, Bartel points out that new games benefit the most from trade credit.

“Seventy percent of that trade credit goes right back into purchasing new games,” he said. “We see it as an integral part of the entire video game ecosystem.”

With the trade-in business serving GameStop so well, is it going to just concede the 60 percent of customers who don’t know they can exchange their old stuff for new stuff? No way.

“What we’re constantly trying to do is create awareness,” said Bartel. “We’ll continue to do that. The Power Up Rewards [customer-loyalty card] is a powerful tool for us to drive awareness of our trade program. You’ll see it in our stores. You’ll see it in interactions with our store associates. We’re on a constant quest to inform the public that there’s a residual value for your games.”