I found some things to like about Amazon’s new handheld digital vending machine, the Fire Phone — like its solid build, camera, and screen quality. But I do wish the interface felt a little bit less cluttered and easier to use out of the box.

The phone went on sale yesterday at $199 with a two-year contract, or $650 without the contract. AT&T has an exclusive on the phone (for now), and is selling it for the same price that it asks for the 16GB iPhone 5s.

Let’s ignore the Fire Phone’s razzle dazzle features (“dynamic imagery” and Firefly) for a moment and focus on the hardware itself. After using the device for a couple of days, I can see that it’s well-sourced and solidly-built. By well-sourced I mean that the component parts are of high quality. The screen displays images clearly, brightly, and at high contrast. The touchscreen is sensitive and responsive.

The Fire has some weight to it, so you don’t feel like you’re holding a toy. I also like the design: The edges are nicely rounded and covered with a material that’s softer than the edges of an iPhone. When you set the Fire down on the table, there’s a soft gripping feel, not a loud clacking sound.

The Fire Phone should be understood as an extension of the Amazon digital ecosystem. It’s a thing you use to buy and consume Amazon music, video, and books. In that way it’s no different from an iPhone, which is a consumption device for content from Apple’s ecosystem. And, yes, the phone does seem to want to build shopping into every experience it can, but to call it just a “shopping phone” is missing the point.

The phone comes with a year of free Prime membership. I found that going to the video section then dialing up some free “Prime” movies was a good experience. I don’t usually watch video on my phone, but dialing up videos seems easy on the Fire because of the tight integration with Prime. Because I was already a Prime member, the phone was all ready to show me new episodes of shows I like and new movies I might like to see. 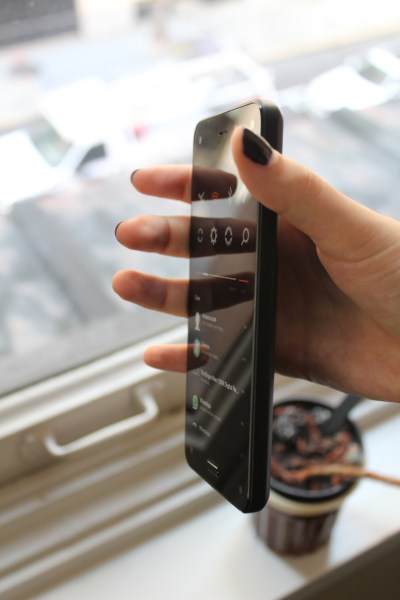 Similarly, when I opened the Music section, the first thing I saw was all the records I’ve ever bought on Amazon, all ready for streaming. A swipe from the left brings out a panel that lets you list your music by artist, song, genre, etc.

The overall navigation of content and features in the phone took some getting used to for me. The Fire offers some navigational tricks that, once you’re used to them, really do help you get to things you need quicker. For instance, you can usually flip a panel in from the right or left side of any type of content section and get contextual links to places you might want to go.

The first thing many of us learned about the Fire Phone was its “dynamic perspective” feature. The phone uses four sensors on its front to determine the user’s position relative to the screen, then adjusts the images on the screen to create natural-looking 3D perspectives.

But Amazon oversold this feature. It really isn’t a very big part of the real life experience of using the phone. Sure, it works great in games. But in maps, it’s little more than a novelty. Outside of those two apps, the feature doesn’t show up much.

You can also move your hand to flip open various information panels, or to enlarge images. But that can be done using the phone’s accelerometer, the sensors aren’t necessary.

Then there’s the well publicized Firefly feature. Firefly uses the back camera to recognize items in the real world, then provide links to various kinds of information, including “where to buy” information. You can also use it to recognize music and movies, then be directed to a page where you can buy them.

My immediate impression, though, is that I will use the Firefly feature very, very rarely. Shazam already does the music recognition part. The video recognition thing is interesting, but, again, I can’t remember many times when I saw something on TV and immediately needed to figure out what it was and how to buy it.

At the phone’s big coming out party in Seattle in June, one analyst said that the best new feature introduced with the phone was Mayday, the real-time video help feature. I opened a Mayday session today and had a nice chat with Robert, a Kentucky-based support rep who was friendly and ready to help me with my problem.

Robert’s video window remained open as we moved around to various parts of the phone’s OS. It was a really great support session. I almost wished I had a real problem for Robert to work on.

Afterward I thought that analyst in Seattle might have been right. You can keep the 3D and the Firefly, but the video support from Robert in Kentucky is a must-have.