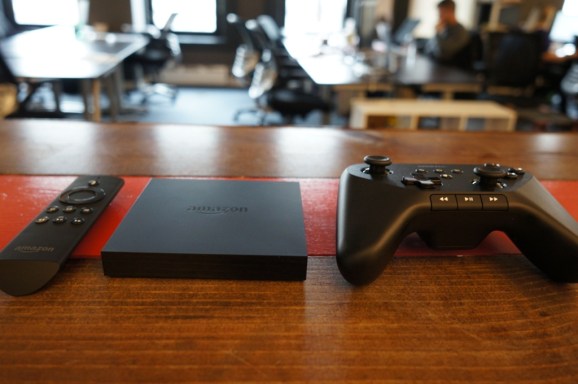 Bit by bit, Amazon has become a game company. The world’s largest e-commerce vendor bought its first game studio, Reflexive Entertainment, six years ago. In 2011, it launched its Android Appstore with thousands of apps, including games. In 2012, it launched its first mobile games produced by its own game studio, Amazon Game Studios. And in February, the company bought game studio Double Helix Games, the maker of the Killer Instinct titles. This interest in gaming is no longer accidental. It’s intentional.

In the meantime, it added game capability to its Kindle Fire tablets. Then it launched Amazon Fire TV set-top box with Android games such as Sev Zero. And last week it finally debuted its Fire Phone with games like To-Fu Fury. Skeptics may have seen these moves as tiny nods toward gaming. But Ethan Evans, vice president of the Amazon Appstore, recently painted a vision for gaming’s future at the Casual Connect game conference in San Francisco.

As Evans noted, the whole universe of games is expanding on multiple dimensions thanks to factors like the growing ubiquity of mobile operating systems. It is remarkable that such glowing comments about the potential of games are coming from someone at Amazon. Ian Vogel, head of Amazon Game Studios in Seattle, also gave a talk about how to develop games on Amazon’s various platforms.

We caught up with Evans and Vogel at Casual Connect. Here’s an edited transcript of our interview.

GamesBeat: When people meet you, do they often ask, “Why is Amazon interested in games? Are you serious?” And what would be the answer?

Ian Vogel: We’re definitely serious about games. A lot of people are paying attention now that weren’t aware of it. We’ve invested in Double Helix, a studio we acquired earlier this year. We’ve invested in some great talent at our internal studios. We have three studios now doing first-party games, as well as a publishing arm.

When we launched Fire TV, the most exciting thing we thought about holistically is that there’s this huge gap between the casual mobile game and the triple-A huge budgets. That’s interesting on a couple of levels. One, we think gamers and customers would be interested in great crafted experiences that are more economical. We, as creators in our studios, are interested in working with smaller teams. You don’t need 1,000 people working on something. You can iterate quickly and things like that.

The gaming industry is at that point of reflection. There’s a huge space there. There’s a lot of opportunity. We’re definitely serious. That’s where we’re going.

GamesBeat: The next “why?” that comes to mind is this. It’s such a small business to you guys. It’s not e-commerce. It’s this tiny segment of a market, from Amazon’s perspective.

Ethan Evans: Maybe? Certainly e-commerce is our largest single business today, but it started very small. Games are the most engaging and in-demand, by percentage of time used, among any digital content categories, both on our devices and others. When we look at games, we see an industry where blockbuster games out-earn blockbuster movies. The total sales in games, I believe, are bigger than all online movie sales and online music. True, it’s not the size of our global retail business today, but we see that potential and that reach.

GamesBeat: I’d imagine there’s a matter of waking up the corporation to the opportunity and figuring out the opportunity. I take it Amazon has gone through that?

Evans: I’ve been with the company a little longer, so I can speak to that. Amazon has been a physical games retailer for a long time. That’s where our original connection to video games began – selling consoles and games and controllers. It began with the money and customer interest generated by Guitar Hero and all the peripherals we could supply and so on.

There were some moments where the company had to move from having started with e-ink devices and book-reading to realize, “Oh, when we move from black and white e-ink to Android tablets, reading is no longer the primary use case.” When you have a company whose beginning was physical books, and whose digital beginning in many ways was e-books, there definitely had to be some awakening.

Amazon is well-known as a data-driven company. When the first data came back showing the strong games usage on our tablets, that’s when the company transformed. Though there was interest and passion and history around the other digital formats, the customer spoke pretty clearly and said, “I want to play games.” That drove the change.

GamesBeat: The bulking-up part, what has that been like? Sometimes we hear that there are hundreds of openings for game people, or dozens already hired.

Vogel: We’ve been making games for a few years here at Amazon, but it’s only been about the last year and a half since that awakening Ethan talks about has come forward. We started acquiring and started hiring. But we still want to keep a mindset where we don’t bulk up too fast, where we stay focused on smaller teams and crafted experiences.

Our charter, at least for my studio in Seattle, is to make great games for Amazon devices using new technology. We have a number of teams working in that mindset. It takes some amount of people, but we’re trying to keep it creatively satisfying and critically smart.

GamesBeat: Do you draw a parallel to some of the original Amazon TV programming? Is it almost like Netflix and House of Cards in some way, where you grow some things inside and own them and get all the value that you can out of them?

Evans: There’s some convergence there, in that the move to be willing to create original content has happened across all of our businesses. If you look back several years ago, Amazon was not in original content – not only in video or video games, but also in books. Now we’re a book publisher. We work closely to bring authors to market. We’ve done the same thing with video under the Amazon Studios brand. The company, in the digital space, has been much more willing to create content, rather than just act as a retailer. There is an analogy there. It’s a consistent move in most of these areas.

GamesBeat: What were some of the steps that proved this out, that showed it was a good idea to keep pursuing?

Evans: Amazon, about six years ago, acquired our first studio, Reflexive Entertainment. But that was a company with two sides. It also had a third-party casual games distribution business. That aligned well with retail. It was a retail business conducted digitally. But once we had a game studio inside, we started looking at what it means to build an Amazon game. That led to the thinking and proving-out.

What we learned was a lesson that’s probably well-known at other hardware makers. Having your own first-party studio allows you to begin working on a game while the hardware is still on the drawing board. Or, using our cloud services like App Stream that you saw, that lets them start working on it way pre-release. You get that virtuous feedback cycle. The game developer makes the service better and the service makes the game more unique.

That’s the real genesis of our investment in studios. We realized that we have to drink our own champagne, as the new saying goes. We have to use what we intend to sell. If it’s going to work well for other game developers, the only way to get there is to have our own game studios providing that feedback early.

Vogel: When we’re creating these ideas, we think about—Developers are our customers too. We want our services to be robust. We want to be there on the vanguard. Sometimes that’s challenging as a creative, because pieces are shifting underneath. But that’s a great value for people externally, because we’ve done a bit of that forging internally and helped make that better for developers as well.