The Last of Us on PlayStation 3 was my favorite release of 2013 — and my favorite game of all time. It won more than 200 Game of the Year awards, including one from GamesBeat. If you didn’t catch it the first time around, The Last of Us Remastered is a great opportunity to see what all the fuss was about. It’s also a great way to take in the experience again for those who loved the original on PS3.

The PS4 version has better graphics that fully render the title’s post-pandemic world in the way it was meant to be seen. You’ll immediately notice a difference in the quality of the visuals and the realism of the characters when you play the survival-action offering.

The Last of Us tells the story of survivors who try to outrun a deadly fungus that turns people into the Infected — or zombies. Humans became infected via bites or deadly spores in the air, which turned them into beastly killers. The virus spreads and renders the world into a wasteland. The remaining cities become quarantine zones under martial law. 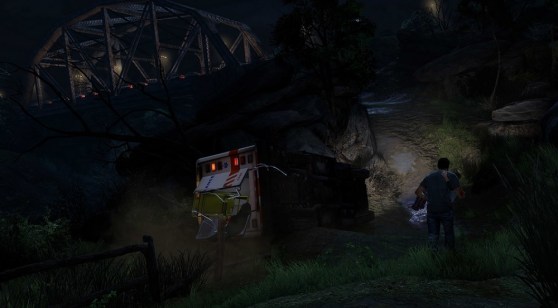 Above: The start of The Last of Us Remastered.

But The Last of Us Remastered is not just another zombie-shooting title. It is a melancholy portrait of the dying human race, besieged by growing numbers of the Infected. The first 15 or so minutes are hands down the best opening for a video game that I have ever seen. It invoked the fear of an outbreak and harsh reaction to it as if you were inside an Oscar-winning film.

Watching that scene again, this time with my daughter, was even more engrossing. The graphics are so much better on PS4. The world and characters are more fleshed out, with increased details, better lighting, and spooky shadows. As you’re running through the apocalypse, the realistic flames leap out at you. Once the story moves to 20 years after the pandemic, you know enough about Joel to understand why he behaves as he does and how protective he is when he meets Ellie.

As I wrote last year, I can’t say that I’ve ever come across a character as compelling as Ellie, the 14-year-old heroine played by actress Ashley Johnson. Details like the freckles on her face and the cuts on her skin reveal an intense focus on realism. She’s a normal teenager, not a superhero. It is such a welcome relief to find a person like this in a video game. Her interaction with Joel, an aging tough guy who has walled himself off from feeling emotions, becomes the emotional crux of the experience.

The characters that Ellie and Joel meet in their journey aren’t cannon fodder. They often make a difference in how Ellie and Joel see the world and each other. As I met all of these people and saw them disappear, I had a growing sense of dread. What would happen if Ellie or Joel didn’t make it? It was an overriding fear that stayed with me as I played, and it showed me how much I had come to love these characters and the way they related to one another. 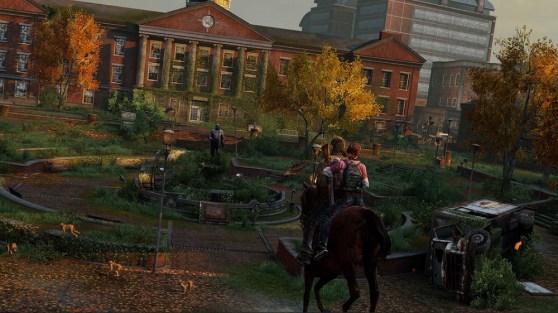 Above: Joel and Ellie on horseback in The Last of Us Remastered.

Controls are slightly different. You can press the touchpad on the PS4 controller to open and close Joel’s backpack.The light bar changes color to reflect the player’s health during combat. The speaker emits flashlight sound effects and tape recorder audio. And the share button lets you easily capture in-game moments from the single-player campaign.

Player progress from The Last of Us PS3 multiplayer will not carry over to the PS4 version. That means players get a level playing field in Factions mode. But you will get a supply bonus to boost your Factions mode progression in The Last of Us Remastered. All downloadable content, such as head items and weapons, which you have purchased for the PS3 will be available in the PS4 version.

The remastered title has extras like a documentary, “Ground: The Making of The Last of Us,” a photo editing mode for rendering shared screenshots, and higher-quality shadows while in 30-frames-per-second lock. It also has some bug fixes and a faster install speed from disc.

Additionally, The Last of Us Remastered includes director’s commentary of in-game cinematics from the main narrative. The commentators include director/writer Neil Druckmann, voice actor Troy Baker (Joel), and the aforementioned Johnson (Ellie). 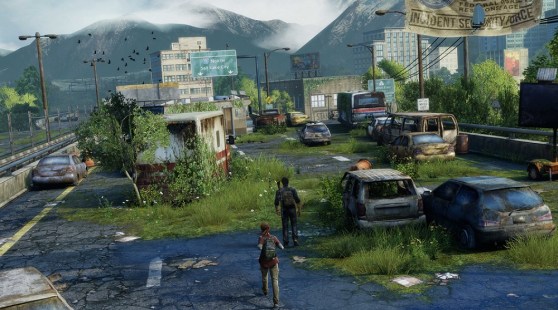 Above: The Last of Us Remastered lets you see for longer distances.