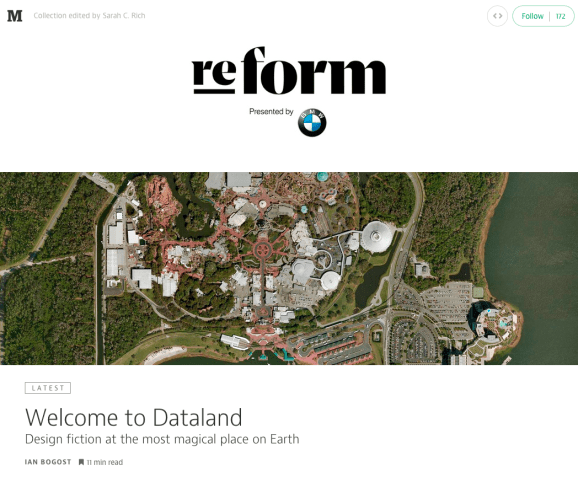 Medium, whose intention is to point to the future of online publishing, today introduced its first sponsor for a collection of curated stories — and pointed to a model where editorial content can enhance the sponsor’s sense of style.

The sponsor is BMW, a line of high-end cars largely defined by its design elements. With a small “presented by” and an unlinked logo, the German luxury carmaker is supporting a collection of stories about design called Re:Form.

Here’s an excerpt from one of the initial three stories, “Welcome to Dataland: Design fiction at the most magical place on Earth” by game designer/author/college professor Ian Bogost:

“For those who reserve a vacation at Disney’s website, the MagicBands are treated like precious tiaras. Upon booking, each member of your family selects a color. Weeks before your scheduled Disney deployment, a box arrives. In it: each band, inserted carefully into a foam cutout sized expressly for it, like a James Bond weapon surreptitiously hidden in a briefcase. The forename of its owner is imprinted before it in the packaging, as well as on the inside of the band itself. Even before arriving, one can practice what it feels like to be a transmitter of one’s own unique ID. ‘Welcome to Dataland, princess.’ “

If that sounds like a Disney World version of a BMW experience, the connection is an appreciation of design.

“The relationship [between Re:Form’s content and BMW] is based on trust rather than oversight,” Medium senior editor Evan Hansen told VentureBeat.

“We [discussed] the overall theme of the collection,” he said, and “together agreed on ‘design,’ broadly speaking.”

Medium initially shared some story drafts with BMW, Hansen told us, “to give a flavor of our approach,” with one running and a couple of others pulled “for editorial reasons.” After the sponsor got the idea, he said, stories are not being shared before they’re published.

“The BMW 4 Series was looking to connect with ‘influencers,’ [also known as] the type of people who both produce and consume content on Medium,” Mark Chu-Cheong told us. He’s the cofounder of Nativ.ly, which specializes in connecting sponsors with startups.

Hansen noted that, without an internal sales team, Medium is working with Nativ.ly to secure sponsorships.

With design being a “key attribute of the BMW 4 Series,” Chu-Cheong said, Re:Form “allowed BMW to ‘add value’ to the Medium community by helping make more great content on the topic of design readily available.”

Outside of the collections, there will also be five articles about BMW, marked as sponsored content, that Medium’s content team will create with cooperation from the automaker. BMW will publish these via its Medium profile.

Over the six month commitment, Medium will run as many as 100 stories on design, and rather than impressions, BMW is being guaranteed a minimum of Medium’s favorite metric: reading time in minutes.

Other curated collections about music and tech are in the works, with sponsors to be announced.