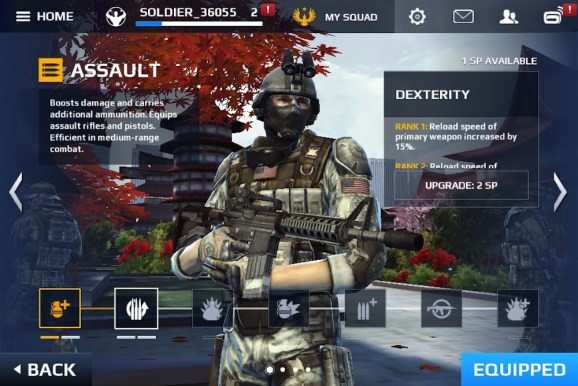 Each of the classes in MC5 come with different weapons and perks.

Modern Combat 5: Blackout tests your tolerance for ridiculous-sounding names: Caydan Phoenix (the gruff hero of our story), Jonathan “Bull” Taylor, and Alex Hawk are some of its characters. Apparently, you can’t fight terrorists unless you’re named after an animal.

The first-person shooter series for phones and tablets is developer Gameloft’s answer to Activision’s Call of Duty. They both share similar settings and gameplay. Despite how big Call of Duty has become on consoles and PC, it doesn’t have a strong presence in the mobile market. The latest Modern Combat uses the same premium price set by its predecessors (it retails for $6.99 on iOS, Android, and Windows devices), eschewing the freemium model responsible for bringing other mobile games to the top of high-grossing lists.

Is Modern Combat 5 worth the 7 bucks? Not really. While it looked pretty on my (relatively ancient) iPhone 4S, the experience felt too uneven. It represents the best and worst aspects of mobile shooters.

Above: Your French supervisor is really mad at you.

A campaign that you can play in short bursts

Though I didn’t care much for the story, Modern Combat 5’s single-player mode was a flashy and entertaining adventure. It moves at a brisk pace across numerous missions, most of which last five minutes or less. Just when you get tired of shooting wave after wave of baddies, it changes up the gameplay with new scenarios, like when you have to use your sniper rifle to protect your teammates or take control of a drone to clear the streets ahead of you.

Modern Combat 5 excels at this type of linearity. It doesn’t pretend to be anything more than a tightly scripted ride through exotic locales. In the options menu, I strongly suggest turning on aim assist (your crosshairs will stick to the nearest enemy), auto-sprint, and auto-crouch for the best experience. They helped me spend more time on shooting and less time fussing with the user interface (more on that later). The enemies aren’t all that smart (neither are your companions), but I can forgive that since they lingered in the open just long enough for me to chain perfect headshots together.

Each campaign level has a variety of Spec Ops modes for you to play. These challenges are even shorter than the campaign chapters, but they pack a lot of excitement. One of my favorites is Assassinate, where you find your target by scanning a group of enemies with your sniper rifle’s scope. Then, you can use a Matrix-like bullet-time effect to take him down — the missions take 20 to 30 seconds, max.

Another fun mode is Breach. In it, you and a computer-controlled partner clear through rooms by using explosives, tossing smoke grenades, and shooting the enemy before they can regain their senses. It’s almost like a terrorist-hunting version of Simon because you have to remember specific rules for each type of bad guy in the room. For example, the armored fella wielding the minigun will only go down with a bullet to his chest, and you need to get rid of the runner (who has a red exclamation point floating above his head) before he escapes and brings reinforcements to the next place you breach.

Above: Figuring out who to kill first is an important part of Breach.

After a cool introduction that took place in Venice, Italy, Modern Combat 5 starts dropping names and events that made no sense to me. One quick Google search later, I realized that these conversations were referring to the last game, Modern Combat 4: Zero Hour. I think you’re supposed to be just as surprised as the characters when they find out who the real bad guy is, but the only thought in my head was, “Who?” How am I supposed to care about the villain and his motivations (he basically wants to start World War III) when I don’t know a single thing about him? Alternatively, why should I care if Phoenix lives or dies?

Gameloft tries to address this with small bits of text during loading screens that tell you about the characters and the organizations they belong to, but that wasn’t enough to make me empathize with anyone in the story.

Multiplayer ditches all the helpful handicaps from the campaign (and rightfully so), but without them, the touch screen just feels horribly slow for fighting in a fast-paced online environment. I tried every control scheme that the title offered and tweaked all of its settings, but I could not find a comfortable way to play multiplayer. If the enemy wasn’t standing still in front of me, I had a zero percent chance of killing them before they killed me. It takes several swipes to turn myself all the way around, and even if I move fast enough to see other people shooting me, I wouldn’t have time to aim and fire back.

I ended up resorting to a spray-and-pray strategy with my shotgun. While I got more kills this way, I still needed a little luck to pull them off.

I don’t have a mobile controller to test this theory, but if you do have one of those pricey accessories lying around (preferably with analog sticks), I imagine you can bypass this issue entirely. Playing with a controller is the only explanation I can come up with for people who have incredibly high kill-death ratios.

Above: Playing Capture the Flag with a touch screen just isn’t very fun.

A bunch of other problems only exacerbated my frustration with the controls. I have yet to play a match without an obscene amount of lag. I frequently respawned in the path of opposing players. And I’m often placed in matches with uneven teams, with the other side sometimes having two or more players more than my squad.

Modern Combat 5: Blackout is at its best when it’s not trying to replicate the FPS experience from consoles and PC. The touch screen doesn’t give you the type of responsiveness you need for a game like this. The only reason it works for the linear campaign and quick-fire Spec Ops challenges is because of player-friendly options that make up for all the sluggishness. But they only provide a temporary solution. The shoehorned multiplayer suite shows why the standard FPS control scheme just doesn’t function well on these devices in the first place.

Gameloft knows how to make an impressive-looking mobile game, but that all goes to waste if it can’t find a way to seriously overhaul Modern Combat’s controls.

Modern Combat 5: Blackout came out on iOS, Android, and Windows mobile devices on July 24 for $6.99. The developer provided GamesBeat with a free iOS download code for the purpose of this review. 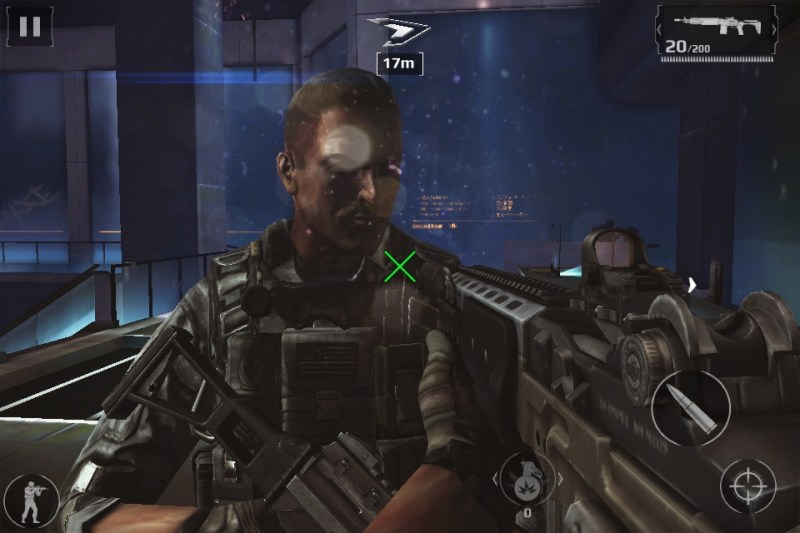 Above: Hey Hawk, you might want to wipe off some of that lens flare before we move on.