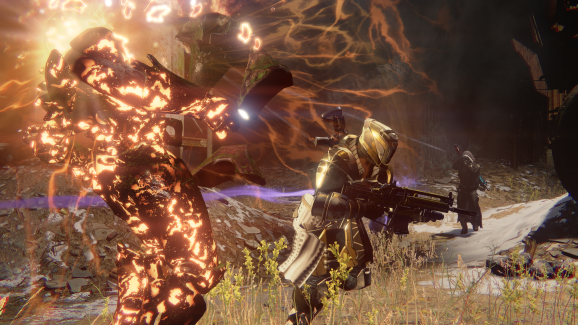 Nearly as many gamers played through Old Russia in the Destiny beta test as the real-world population of St. Petersburg.

The beta for the new massively multiplayer sci-fi shooter attracted more than 4.6 million unique players before it ended Sunday, which Activision claims smashed the record for next-generation consoles. Destiny, the newest title from the developers of the Halo franchise, will go on sale Sept. 9.

“We were totally blown away by the number of people who played the beta,” said Pete Parsons, the chief operating officer of game developer Bungie. “We surpassed even our own goals and the feedback was invaluable. We cannot thank the community enough, the response was humbling and in the weeks ahead we’ll be working hard to ensure that Destiny lives up to the expectations at launch.”

Destiny’s beta opened up to PlayStation 4 and PS3 preorder customers July 17-July 20. After a day of maintenance, Bungie and publisher Activision invited all preorder customers (including Xbox 360 and One users). Starting late Thursday, they invited anyone owning one of the four consoles and an appropriate network membership. By the next day, more than two million unique players had signed up.

“It’s palpable here!  It’s amazing to be a part of this,” Activision spokeswoman Genevieve Waldman said Friday. It took less than two days for that number to double. By the time players were crowding the game’s central Tower for the final impromptu dance party Sunday night, they had obliterated the record.

Activision claims that the total of unique users sets a record specifically for next-generation consoles and for any new (non-sequel) game, Waldman said, though it may also hold the overall record. Bungie also set the then-record for console betas in 2010 with Halo: Reach, which had 2.7 million players. Because all publishers don’t release beta participation numbers, it’s unclear whether any console game has attracted more beta players since.

By comparison, Titanfall, which was available earlier this year to PC and Xbox One, had about two million players during open beta. Bethesda’s Elder Scrolls Online PC beta had five million sign up, though it’s unclear how many actually signed in.