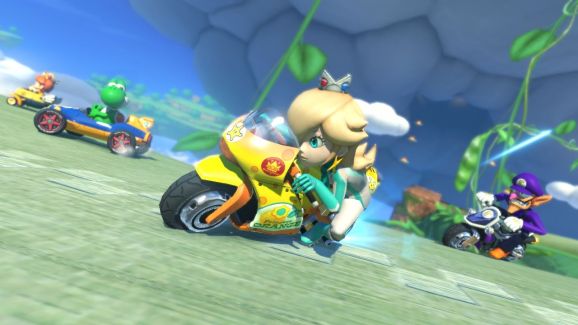 Mario Kart 8 in action for Wii U.

The Wii U’s struggles continue even as Mario Kart 8 secures its blockbuster status.

Nintendo reported a $97 million loss in the first quarter of its fiscal 2015, which ended June 30. That’s on revenue of $729 million, which is down 8.4 percent compared to the same period last year. This comes despite Mario Kart 8 sales surpassing 2.8 million copies. While that is a respectable number, the game did not appear to move an extraordinary number of consoles as Nintendo only shipped slightly more than 500,000 units during the three-month period from April through June. The Japanese publisher has had trouble turning a profit since the debut of the Wii U, as many people are choosing other platforms like PlayStation 4, Xbox One, or mobile devices.

Nintendo has sold 6.68 million Wii Us as of the end of Q1. That puts it behind PlayStation 4’s 7 million units sold. Sony’s machine has already outsold Nintendo’s despite the Wii U’s 12-month head start.

Of course, the Wii U isn’t Nintendo’s only hardware. The 3DS handheld has reached 44 million devices shipped. The company sold in 820,000 new 3DSes during the quarter.

Looking ahead, the publisher is holding to its target that it will ship 3.6 million Wii U consoles in fiscal 2015. It’ll have to do most of that damage in the upcoming holiday season when it will finally debut the latest Super Smash Bros. four-player fighter for the system. That release is highly anticipated, and it could perform at least as well as Mario Kart 8.

For the year, Nintendo still expects to come out in the black. The company is estimating that it will generate around $195 million in profit for the year on revenue of nearly $5.8 billion.