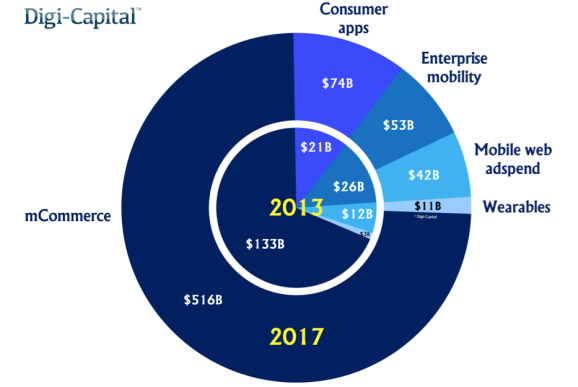 Mobile revenue will jump more than 300 percent in the next four years, hitting $700 billion in revenue by 2017, according to a new report by Digi-Capital.

No, that’s not all gems in Clash of Clans.

In fact, most of the growth will be in mobile commerce, which Digi-Capital says will hit $516 billion. Consumer apps will account for another $74 billion, while enterprise mobility will hit $53 billion. Mobile ads, at $42 billion, and wearables, at $11 billion, will round out the $700 billion total.

“Mobile’s so big, it’s hard to take in all at once,” report author Tim Merel told VentureBeat. “When we broke down the data by sector … what jumped out was the power of mCommerce to drive the market. Growing from over $100B to half a trillion dollars globally, it commands the lion’s share.”

The next four years won’t only showcase the maturation of mobile, however. According to Merel, it will also highlight the ascendence of Asia.

A full half of global growth will be in Asia, the report says, with mobile-enabled commerce hitting $230 billion in 2017. While Europe and Asia are still growth markets, Asia — and especially China — will take a leading role. North American mobile commerce will be almost $100 billion less, at $144 billion, while both western and eastern Europe combined will total $113 billion.

Latin America, the Middle East, and Africa will lag with mobile revenues of just $43 billion. That’s simply a function of relative wealth, as some African nations — such as Kenya, with its m-Pesa — have led mobile commerce in a very real sense.

And as for games, the poster children of mobile millions? Expect a degree of cooling, Merel says. At least, relatively speaking.

Above: Consumer apps will be $70B+ with only half of it games, according to the report

“Mobile games have had an amazing ride, driving 75 percent of all mobile apps revenue last year despite having only 40 percent of downloads,” he told me via email.

“We still see a lot of growth coming from mobile games, but expect other sectors to take over half the market by 2017. Where in-app purchases work brilliantly for games, App as a Service business models are starting to deliver new revenue streams for other sectors.”