Polyvore announced a new, simpler version of its iPhone app today. The new app makes it faster and easier to browse your favorite styles and trends.

Polyvore, which is basically a mix between Pinterest and Amazon in that you can create your own outfits and then buy them, was founded in February 2007. Headed in Silicon Valley, it’s currently funded by NV Investments, Matrix Partners, DAG Ventures, Benchmark Capital, and Goldman Sachs. Polyvore’s first iPhone app came out in November 2012, and the iPad app launched in October 2013.

Feedback from forums and beta testers indicated to Polyvore that its previous iPhone app design was too complicated. The new app now boasts a cleaner, more modern design, featuring vertical scrolling instead of previous horizontal scrolling. It also includes a double-tap feature with a heart animation where you can easily like your favorite items and sets by double-tapping them. Sets are larger, too, making it easier to see your creations.

Items are now added to the Feed, letting you discover awesome new products that your friends are loving. If you want to filter sets or items, tap the Filter button, located in the top-right corner of the Feed.

A new tab, Browse, makes browsing and shopping simpler. You can browse by “Categories” or “Trends,” or you can use the search box to search by products, sets, people, hashtags, or brands. Shop and Top Picks are now located in the Browse tab.

As part of the announcement of the first app in November 2012, co-founder Pasha Sadri indicated that future versions of the app could include image-recognition, a feature that would allow a user to snap a photo of an outfit she likes on the street and use the picture to scan for similar items on the Polyvore database. Looks like this feature won’t come with today’s iOS update.

Here are a few snapshots of the new version, which can be downloaded here. 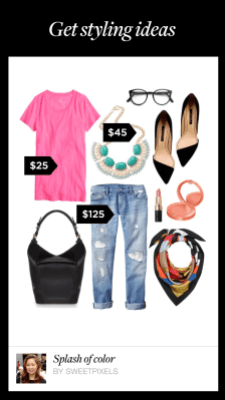