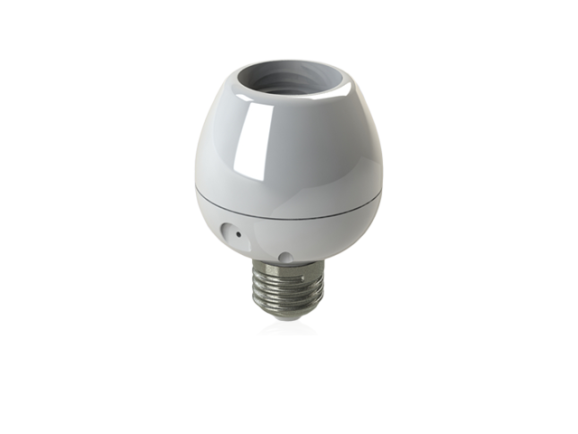 Screw the Vocca adapter into a lightbulb socket, and a lightbulb into the adapter. You now have a voice-activated light. Say the trigger phrase out loud, and the device will toggle the bulb on or off.

Tel Aviv startup Activocal launched a Kickstarter campaign today to fund its Vocca product. It had raised more than $6,000 out of a $40,000 goal by press time.

“I have always had the strong belief that voice is the medium to communicate with machines around us,” inventor Nir Dvash told VentureBeat. “It was just a matter of when this next opportunity would arise.” The standard Vocca model is toggled by the phrase “Go Vocca Light.”

You can configure an advanced version (which uses Bluetooth to connect to an iOS or Android smartphone) to recognize any short phrase, and to turn on and off at set times of the day. Kickstarter rewards include early releases of both versions of the device.

A number of similar products that connect to smartphones are already on the market, but Vocca appears to be the first to have built voice recognition into the adapter itself.

“Originally the idea was to make a voice-activated bulb, but rethinking the idea, it made more sense for it to be the adapter, leaving the user the option to hold onto or choose favorite bulb options, giving them a lot more freedom.”

One technical challenge proved insurmountable. The adapter can’t handle the heat from an incandescent bulb, so Activocal recommends only LED and compact fluorescent lights.