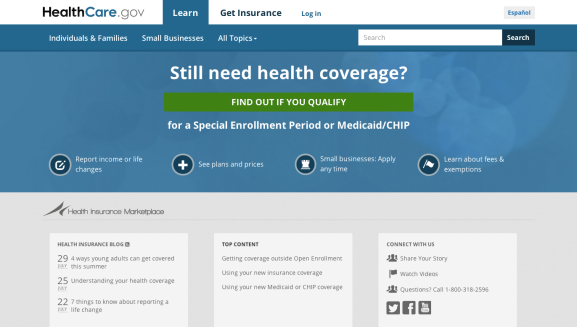 A screen shot of Healthcare.gov.

Much has been said about the contractors that worked on the notorious healthcare.gov website and its execution, but the U.S. Government Accountability Office has its own take on the matter, detailing in a new report exactly how the Centers for Medicare & Medicaid Services (CMS) mishandled the situation.

The timing is perfect, at least for certain people. The report, issued today, hits as some politicians have called for impeachment of President Obama, while the U.S. House approved a bill to permit a lawsuit against Obama surrounding his handling of the Affordable Care Act.

This marks the latest and possibly the most thorough official evaluation of what went wrong. It follows lots of handwringing in recent months, which has manifested in CMS dropping its contract with CGI and signing up with Accenture, the departure of the site’s chief information officer, and a document claiming the government had made vast improvements to the service.

Today’s report levels several specific accusations at the CMS, including that the CMS did not clearly define the goals and expectations for the contractors that were hired to build the site. “We found that well-defined requirements are critical to the government getting what it needs from service contractors,” the report said.

What’s more, the GAO noted that the CMS used potentially risky “cost-reimbursement contracts,” which can be problematic because those contracts compel an agency to pay the contractor even if they don’t deliver what it promises to deliver.

The costs of building the website and data hub also spun out of control, according to the report. From September 2011 to February 2014, estimated costs for developing the health insurance marketplace increased from an initial $56 million to more than $209 million. The cost of building the data hub increased from an initial contract obligation of $30 million to almost $85 million.

The GAO said the CMS “took limited action” even after finding “significant contractor performance issues with CGI. “This work also has experienced cost increases due to new requirements and other enhancements, with costs increasing to over $175 million as of June 2014,” the report states.

Altogether, the report notes that IT-related “obligations” for the project, including spending on software and hardware, came out to about $946 million from fiscal year 2010 until March 2014.

The CMS allowed the contractors to use an “agile” approach to developing its data hub and website, when the CMS had already admitted that it had little experience developing in that way, the report says. Agile development calls for an iterative approached to building new features, that is a little at a time, instead of using a scheduled, phased approach.

And the GAO criticized for the “high risk” way it chose to compensate contractors. CMS used a “cost-plus-fixed-fee” contract, wherein the government pays the contractor for expenses up to a certain amount, but the payments are not tied in any way to whether or not the contractor finished the job it was hired to do.

The GAO recommends in the report that CMS “take immediate actions to assess increasing contract costs and ensure that acquisition strategies are completed and oversight tools are used as required, among other actions.”