Social media teams appear to be getting a lot more done with the same number of staffers, according to a new report published today by ViralHeat.

In the survey, entitled ‘Social Media Status Quo’, ViralHeat canvassed 500 social media professionals and found that their use of social media is changing and evolving.

The report suggests that social media teams are staying small, but that the number of platforms they use is increasing — businesses aren’t just relying on Facebook and Twitter for their social needs.

I asked Jeff Revoy, ViralHeat’s CEO, whether he thought that better social media tools are driving this efficiency, or that the economic climate is forcing teams to do more with less.

“I think it is a combination of both,” Revoy suggests. “The evolution of better social media management tools definitely increases efficiency, which directly affects a team’s ability to do more with less.”

Revoy believes that sophisticated tools can take hundreds of man-hours away from cumbersome-but-necessary tasks such as identifying influencers, monitoring the brand, identifying leads, and scheduling posts and social-media updates.

“As a result, CMOs recognize that they can actually save money and time while increasing efficiency, keeping a smaller team and bringing on a tool that also tracks progress, results, and ROI,” Revoy goes on to say.

Of course, ViralHeat is not a disinterested observer in this case — it produces a tool that attempts to offer those efficiencies — but Revoy’s point is a valid one and applies equally to the dozens of other social media management suites available to marketing teams today.

While 80 percent of respondents said that they rely on Facebook and Twitter for business marketing purposes, the survey discovered that other platforms are becoming increasingly important to social teams. Especially notable are increases in the use of LinkedIn, Pinterest, and Instagram. 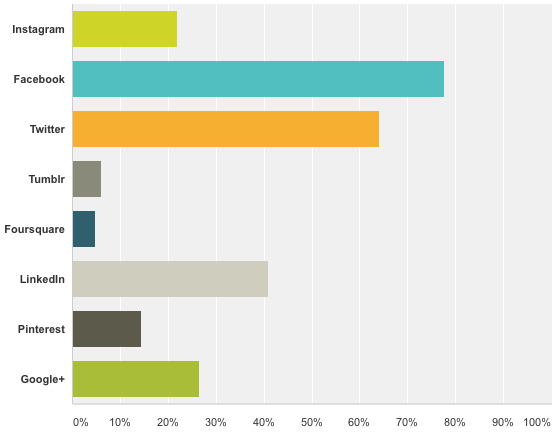 The study also suggests that there is greater pressure from management on social media teams: They want to see a tangible return on investment from social media. The response from social media managers is to turn to advertising and retargeting — serving advertisements to people more frequently once they have left your website — in order to appease those that are looking at the bottom line.

I asked Revoy his opinion on what this means for social media going forward.

“I believe [the push towards advertising] is caused by a misunderstanding of what can be achieved through social media when done strategically,” Revoy says.

“Currently we see that businesses are still relying on shallow numbers — likes and fans. This approach, however, no longer works, as brands such as Facebook have changed the algorithm to show posts/updates based on engagement rather than time. As a result, these brands turn to advertisements to target customers since organic reach is no longer relevant,” Revoy says.

“However, there are some brands who are ahead of the game and understand that when social media is used strategically, the ROI is even greater because they can identify hot prospects who already show purchase intent,” Revoy concludes.

Other highlights from ViralHeat’s survey include the following data points: