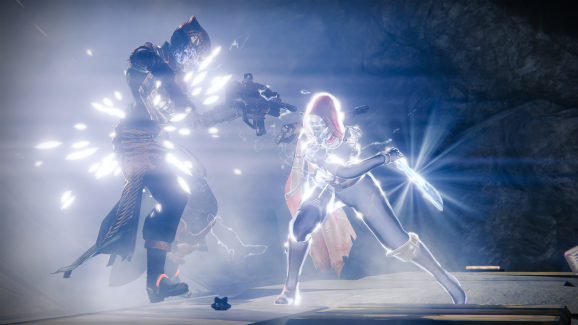 Enjoy your gorgeous team PvP action in Destiny - and its rare voice chat.

Corrected at 9:30 a.m. Pacific with the proper Metacritic score for Final Fantasy XIV: A Realm Reborn.

Destiny, the upcoming shooter developed by the guys that brought you Halo, has a fight for survival ahead of it as daunting as any that players will face on its worlds.

Creating a persistent, engaging online world with multitudes of gamers is the core of what makes a massively multiplayer online (MMO) game a success on the PC. Unfortunately, bringing it to a couch and controller is a legendary achievement. The road to success for console MMOs is littered with the bodies of the fallen; for every modest win, a dozen titles never see the light of play.

Bungie’s Destiny takes a shooter and builds in variations of all the classic MMO gameplay: leveling up of characters, item upgrades that affect abilities, interaction with random other gamers (including player-versus-player combat) … even cooperative group raids with others against common enemies.

But to succeed, Destiny will have to avoid a minefield of common console-MMO booby traps when it launches September 9 for PlayStation 3, PS4, Xbox 360, and Xbox One. We made a checklist of the pitfalls and then played the beta and asked the developers to find out how Destiny might cope.

Above: Makeup choices: File this under “things that are rarely seen in shooters.”

Built for PCs … awkward on consoles

This is the classic blunder for console MMOs. (Most have avoided playing through a land war in Asia.)

PC games use up to hundreds of commands, which is fine for a 14-button mouse and a keyboard full of hotkeys. Translating that to a pair of thumbsticks, a few buttons, and a D-pad inevitably slows down the pace of a game that was already leisurely. See: every MMO released for consoles to date.

Games like Destiny have a bit of an advantage in this area: Because they’re shooters, they have an established controller setup. You’re still going to spend a bit more time than usual staring at your gear and abilities, but the action is first-person move, aim, and fire, feeling remarkably like … uh … Halo. Coincidence, that.

“I’ve raided a lot in MMOs through the years,” he said. “The emotional core of that activity: camaraderie, team-building, challenge, execution, prestige — Destiny’s Raids will touch all of those things. But again, because we’re an action game, there are things we can do with — and to — players that other games can’t.

“It’s kinetic; it’s action-based. It’s not a battle against the UI [user interface] …. In fact, there’s not much in the way of UI at all. No waypoints, no helpful objective text, no obvious hand-holding.”

Built for consoles … lackluster on PCs

This is a pretty tiny group compared to the mountain of game corpses over there in vice-versa land, but it contains one notable entry. We’re looking at you, Final Fantasy XIV: A Realm Reborn.

There’s a reason your Metacritic score, the average of all major professional reviews, hit 86 out of 100 for the PS4 version this year and 83 for the PC. Standards that make you one of the most critically acclaimed MMOs ever to hit a console may not line up with PC gamers’ expectations.

Destiny avoids this one the easy way: No PC edition will be available at release. “It’d be dishonest to say we haven’t talked about a PC version,” Smith said. But so far, it’s just a discussion.

Above: The few, the proud, the ones that can talk: Fireteams, shown here in Crucible PvP mode.

A free-flowing mix of chat and voice interaction are PC MMOs’ social hook, giving titles life through player interaction long after they would have died a natural death based solely on gameplay. Console controllers often make MMO players frustrated that they can’t type out Chuck Norris jokes fast enough (or say them to a large enough audience).

Yes, of course you can use keyboards and keyboard controllers with some games. But really, if you wanted to use PC-style controls with a keyboard and mouse, you should just hook up your laptop to the TV.

Destiny avoids this problem, and trolls in voice and text chat, by only giving you the ability to talk with people in your Fireteam, the groups used for co-op bosses and in the Crucible player-versus-player area. But that in turn makes this huge game feel much smaller.

You can use character gestures elsewhere, and Bungie intends for players to interact — by cooperating — to carry out missions or kill bosses that spawn randomly in public spaces.

“There’s so much future potential in how we want Destiny players to interact with one another, both in public spaces and in the Tower,” Smith said, referring to the game’s central gathering area. But even now, he said hopes players will still take note of other players, even if they aren’t fighting or shopping together.

“Sometimes you’ll catch a player drive a Sparrow off of a cliff, dismount mid-air, and disappear into a cave. We hope you’ll be tempted to follow them in and see what you both find.”

Above: A player and a Sparrow like this one.

Like this game on PC? You’ll love it on this toaster!

The vertigo-inducing drop in graphics capability and storage from PC to consoles has historically kersplatted promising titles. We blame EverQuest Online Adventures, a port of the uber-popular PC game, which set the trend back in 2003: Compared to EverQuest for PC, the game offered a fraction of the quests, all the endless grinding, and subpar graphics.

Only now is the stronger hardware of the PlayStation 4 and Xbox One offering hope for games like Destiny, though neither one approaches an average gaming PC.

“Building a game like Destiny brings with it enormous challenges on all platforms,” said Natasha Tatarchuck, Destiny graphics engineering architect. “The sheer complexity of geometric detail and texture density required to make the worlds immersive means that we had to work hard to craft believable, performant and visually stunning destinations for last and current generation consoles.

“We can proudly say we did not compromise any gameplay related aspects to achieve that goal.

“Destiny’s core player-facing features are consistent across all platforms, and this includes the character count, gameplay mechanics, matchmaking, and other core functionality.” Good news. But before you get too optimistic …