The mobile app is long over due, especially considering Indiegogo’s rise to become one of the largest crowdfunding platforms in the world. (Competitor Kickstarter has had a mobile app for a while, too.) The company previously released a mobile app that was only available to those in the Canadian market earlier this month. Indiegogo said the app launch comes after the company saw mobile traffic to its website from international users double in the last year.

The app itself is free and currently only available on iOS devices. The app lets you search for new funding campaigns by category or via recommendations. You can also claim campaign perks. And those that are running an Indiegogo campaign also gain functionality, such as getting notifications for new contributions, monitoring comments, posting updates, and more.

Personally, I’ve missed out on donating money to campaigns due to the lack of a mobile app. And presuming I’m not the only one to experience this, the new iOS app will help speed up the number of campaign contributions on Indiegogo in general.

Founded in 2008, the San Francisco, Calif.-based startup has raised $56.5 million in funding to date. It competes with a slew of rivals, including Kickstarter, Tilt (formerly Crowdtilt), Crowdfunder, and others. Check out the gallery of screenshots below for a closer look at the new Indiegogo iOS app, and let us know what you think of it in the comments. 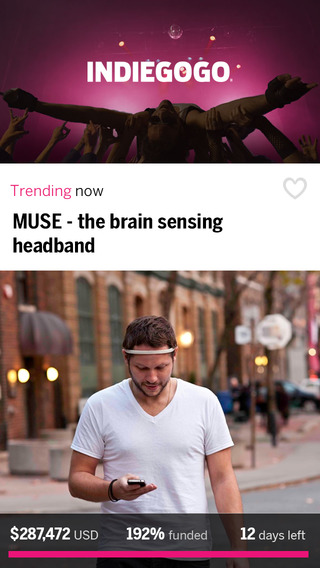