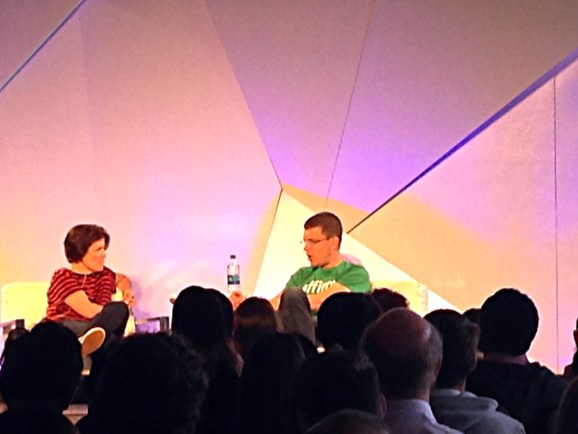 During a fireside chat at Mixpanel’s Data Driven Conference, Levchin revealed that at the core of Affirm is the idea that there’s a world of data that’s not being used to estimate lending risk. This could mean missed opportunities and even mistakes “when we look at you and decide if you’re a good risk or a bad risk,” Levchin said.

Affirm partners with merchants who sell online, providing instant credit to shoppers when they make purchases. It also makes the checkout process faster and easier by eliminating the need to enter credit card information and all the other usual steps. Shoppers later settle their Affirm accounts, presumably at a more convenient time.

Affirm differs from traditional consumer credit in that it uses a variety of data sets to assess shoppers, from available credit data to merchant data, and even social media data.

“More broadly, I think there’s a huge number of systems we devaluate,” said Levchin. The lending industry leans heavily on the FICO score, but Levchin finds it very coarse, leaving out a lot of data that could add nuance to a borrower’s risk factor. He compared it to today’s trend of using GitHub activity, for example, when hiring web developers, and how their community participation and interactions can provide additional information about them as candidates.

It’s not that we’re suffering from a lack of data — we have a lot of it actually, Levchin said. It’s just not being put to work, and we haven’t evolved our systems.

“The granularity of a lot of these systems hasn’t changed in a long time,” he said. “Most banks are profitable, they make a lot of money, so there’s not a lot of incentive to challenge the FICO score.”

Data is also crucial to the detection and mitigation of loan default risk. Levchin divided this into two categories: the intentionally criminal kind, also known as fraud, and the accidental kind that happens when a person borrows more money than they can afford to pay back.

Catching the former requires work, but it’s doable. Predicting the latter is challenging. “People are bad at estimating what will happen to them in the future,” he said, and that’s where historical financial data comes in handy.

For example, Levchin has learned that while two bankruptcies on a person’s record makes them, obviously, a very high risk borrower, just one doesn’t say much about their risk in and of itself. This is a case where more granular data is necessary to paint a full picture.

“Typically, as humans we make up our own story to make up for the lack of data,” he said.

Interestingly, Levchin’s Affirm is not the only company crunching data and giving out on-the-spot online consumer credit. Klarna offers a similar service and is fairly established in Europe.

Paidy (Exchange Corporation), which launched in Japan on Monday, is similar to Affirm, although it uses slightly different data to create Japanese consumer models, not to dynamically set interest rates for shoppers.

Affirm announced that it had secured $45 million in funding in early June.