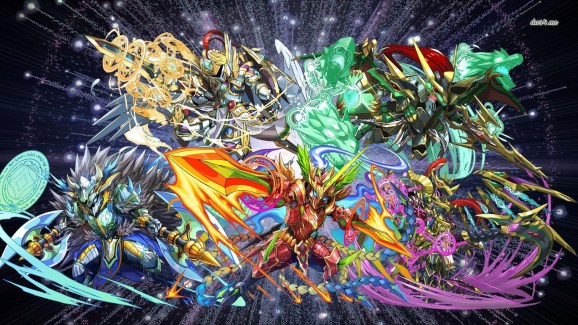 Some art from Puzzle & Dragons.

Puzzle & Dragons has other developers eyeing GungHo’s wallet with envy.

GungHo Online Entertainment reported that it generated $918 million in revenues in the first half of 2014. That led to a massive profit of $523 million for the Japanese developer, which is best known for the free-to-play match-three game Puzzle & Dragons. That smartphone app is still one of the biggest in Japan, and it is affecting the entire landscape of development in that country and around the world.

Puzzle & Dragons maker GungHo said yesterday it reached sales of US$932 million in the first half of 2014. Profit: US$526 million.

GungHo is a great example of what many other developers and publishers are chasing. The company has one huge hit in Japan, and it is on pace to make $1 billion in profit in 2014. Japan is the top-spending country in the world on mobile, and it accounts for a large portion of the $16 billion that the Earth spends on game apps. Releasing one app that catches on in that market is nearly a license to print money.

The earning potential isn’t the only thing that other developers look at — something like Puzzle & Dragons doesn’t cost a whole lot to make either.

GungHo has the highest operating margin in Japan’s Nikkei 400 stock index. That means no other company is pocketing as much of its revenue as profit as GungHo. Puzzle & Dragons does not cost a lot to maintain and develop for, but players are spending a lot on the game. That’s compared to something like Final Fantasy publisher Square Enix, which produces triple-A role-playing games with mammoth budgets. That company released Lightning Returns: Final Fantasy XIII debuted in November in Japan and earlier this year in other regions, and it came and went all while Puzzle & Dragons continued bringing in more players and more money.

This is why Square Enix is pouring so many resources into mobile. The company has seven iOS and Android games in the works right now that it plans to launch before the end of 2014. This is after it has already released 14 games for smartphones and tablets earlier this year. Some of these are re-releases from Square Enix’s back catalog, but many are free-to-play games looking to find a Puzzle & Dragons-like level of success. Even if just one of Square Enix’s games finds just a quarter of the success of GungHo’s massive hit, it could have a big impact on its bottom line.

All of this comes as more gamers in Japan shift from traditional platforms to mobile. The nation’s console and handheld market shrunk from $4.8 billion in 2012 to just $4 billion in 2013.

Interestingly, while everyone making console and handheld games are looking at GungHo, that company is taking its brand and going the other direction. The developer sold 1.5 million copies of Puzzle & Dragon Z, which is a revised port for Nintendo 3DS, in the first half of the year.