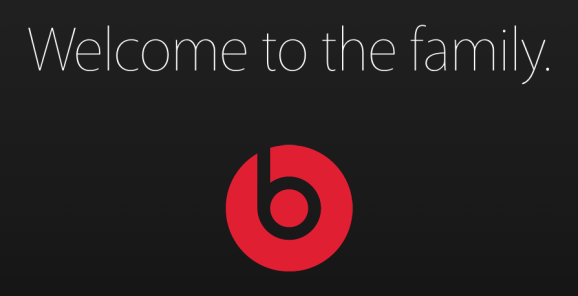 Apple is officially welcoming Beats to the family today, according to its website.

“Today we are excited to officially welcome Beats Music and Beats Electronics to the Apple family,” Apple said.

The European Union approved the acquisition just a few days ago, and Apple’s public show of affection likely means it’s just been approved in the U.S. as well.

The iPhone maker is also scooping up Vivendi’s roughly 13% stake in the company for a reported $404 million, Bloomberg reports.

The shares were held by global music label Universal Music Group, which Vivendi owns. Though the company has offloaded Beats, it still maintains stakes in Spotify.

For the last two years Vivendi has been selling off assets. Last year Vivendi sold its shares of game maker Activision in a deal worth $8.17 billion; and in April the company sold off French phone company SFR for a reported $23 billion.

Apple agreed to buy Beats Electronics for $3 billion back in May. Beats was founded in 2006 by west coast rapper Dr. Dre, entrepreneur and investor Steven Lamar, and music industry exec Jimmy Iovine. Since its founding the company has garnered $500 million in private equity funding from the Carlyle Group.

Buying up Vivendi’s shares was perhaps the final transaction that needed to take place before the company moves forward with its plans for the music giant.