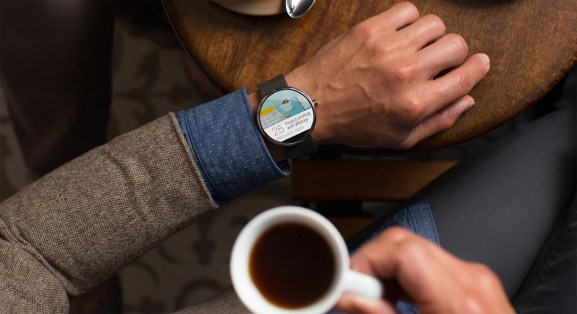 At their recent developer conferences, Apple and Google introduced new facilities in their mobile operating systems that will serve as aggregation points for a rich stream of data from wearables. But the more important stream to manage may be the path back from the phone.

In these early days of smart wristwear, most products have been focused primarily on input or output. Input devices have included the Jawbone Up and Fitbit Flex. They’re mostly alternatives to clip-style smart pedometers that collect information on measures such as steps and heart rate. Output devices have included the Pebble and Samsung Gear watches. For these products, notifications have been a clear part of their proposition. One can quickly glance at updates without having to pull out the rapidly growing displays of our smartphones that may be ticked away in pockets or purses.

One reason to keep them separate has been the preservation of battery life, the Achilles Heel of wearables. One may not want to compromise the longevity of a step-tracker with a backlit LCD shining for a good portion of the day. Increasingly, though, the input wearables are taking on more output duties.

Basis, one of the most sophisticated vital signs monitors to attack a wrist, has a display as does the Nike FuelBand. And more recently, the Samsung Gear Live, one of the first Android Wear devices, includes a heart rate monitor. Samsung’s Gear Neo may be the best example to date of a product that lives somewhere between a data-gatherer and a smartwatch.

As more products seek to offload notifications from the handset,  the humble notification — once an afterthought of mobile operating systems — has become a surprisingly high priority as the major handset OS companies gear up to take on wearables.

Apple has overhauled its notifications, catching up in terms of enabling quick reactions to notifications, enabling widgets in notifications, and creating a unifying notification architecture between iOS and Mac OS. Microsoft, which had provided an alternative to traditional notifications with Live Tiles, is implementing them fully for them in Windows Phone 8.1.

But the most significant work in walking the line between keeping customers abreast and annoyed has come from Google. The company won early praise for the way notifications were implemented in Android. In the next version, currently dubbed Android “L,” notifications will be able to creep up to the lock screen and those from phone calls will be able to operate in a non-disruptive “heads up” mode. In fact, interest in the functionality is so high that one developer has implemented the feature for current version of Android.

Android L also includes a new notification ranking system that Google justified by noting limited space on the lock screen, but the new system is also designed with Android Wear in mind. Ideally, the smartphone should learn by analyzing your behavior to determine which notifications are personally important and not just contextually so. In iOS 7, for example, the user can determine the level of intrusiveness for any given app’s notifications. And while this is worthwhile as an override, the system should be a lot smarter and lean much more to a lack of disruption.

Notifications have even more relevance for augmented reality products such as Google Glass or the Epson Moverio. An even larger share of their proposition is being able to receive the right data at the right time. However, this scenario is more complicated because determining the relevance of notification on such a product may depend far more on what is in the user’s field of view at any given time.

Developers certainly have a role to play in exercising restraint when it comes to sending notifications to a wearable. However, overall control over notifications and integration of them with other devices give the mobile ecosystem players a big advantage in dominating the smartwatch market. Indeed, it also leaves them with a disproportionate burden in determining the success of this fledgling device category.

If Apple, Google and Microsoft cannot come up with a way to make notification on wearables valuable, consumers will notify them by giving up on the category early.