Companies have heard us loud and clear: We don’t want to pay with anything but our phones, and this includes when we go out to eat.

Settle, a Ukranian company that just scooped up $1.5 million in funding (its first since its founding this year), makes a mobile app that enables restaurant-goers pay from their phones, without having to ask and wait for the check. The app is geared toward the Eastern European market, with Kiev as the first city and Moscow and Warsaw launches coming shortly after.

Participating restaurants receive tablets with an app that shows customer billing and activity info, and customers simply pay through their corresponding smartphone app, which connects to their bank account. Settle has partnered with several banks in Eastern Europe, meaning that a customer’s app is directly connected to their bank account without Settle storing the information. The company says that it plans to eventually integrate its product into existing point-of-sale (POS) system. Settle takes a small cut of each bill payed through its system, and there is no subscription fee.

“Settle brings security and convenience to diners in Eastern Europe. No more waiting for the bill when you’re ready to leave. The whole transaction is on your phone, so there’s no more forgetting your card after a meal. We’ve set up a deep integration with banks: users connect payment cards on the bank’s side so Settle does not even don’t store payment card information,” said Settle chief executive Stas Matviyenko in a statement.

The company also plans to eventually integrate iBeacon technology, low-powered transmitters that can emit signals to iOS devices, so that participating restaurants can send greetings and special offers to customers as they enter their locations. Settle also sees opportunities to expand beyond restaurants and into gas stations, cabs, and retailers.

Apps with similar functionalities already exist in the U.S., including Cover, LevelUp, TabbedOut, and others. However, the company says, there is no such service in Eastern Europe, opening up a wide opportunity for Settle.

Moscow-based venture capital firm Life.Sreda provided the funding for this round. 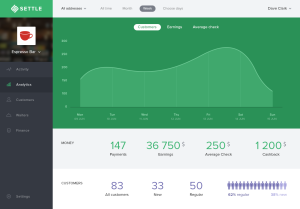