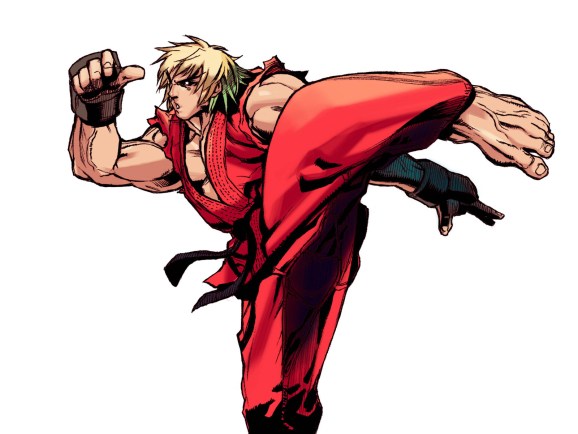 Daigo cemented his legendary status with his famous "parry" win against Justin Wong in 2004.

One of the greatest moments in competitive fighting-game history is a decade old today.

On Aug. 1, 2004, long-time Street Fighter player Daigo Umehara, with only a sliver of health, came back to win a match in spectacular fashion. It was a semifinal match for Street Fighter III: Third Strike at the Evolution fighting-game tournament in Las Vegas. Daigo, playing as Ken, faced off against Justin Wong’s Chun-Li. In the final round, after each combatant had racked up a win, Wong was able to chip away at Daigo’s health until he only had the tiniest pixel left.

That’s when Wong went in for the kill — and Daigo made history.

“I think the reason that Daigo’s parry is so enduring in the fighting-game community is because it’s during tournament play,” Evo cofounder Joey Cuellar told GamesBeat. “People have to play in the moment and make split-second decisions during tournaments, so the fact that this happened during an actual Evo event is wild.”

Cuellar says that a few other other incidents come close to Daigo’s parry, but none top it.

“A lot has changed in 10 years in the fighting game genre,” he said. “A lot of games now have comeback mechanics where if you are down big, the game gives you an opportunity to come back. This is present in modern-day fighting games such as Ultra Street Fighter IV — the ultra-combos — and Ultimate Marvel vs. Capcom 3 — the X-Factor.”

Because of that, Cuellar thinks the parry’s place in history is pretty secure.

“The reason this is so special is because there is no comeback mechanic in Street Fighter III: Third Strike,” he said. “Every parry in the video required precise timing, and he had to execute a hard combo after parrying 16 hits. If any part of that fails, he ends up losing. I doubt if we will ever see this moment topped in competitive fighting games in the foreseeable future.”

Check out the video below to see Daigo’s parry in all of its glory and stick around for the explanation if you’re confused:

In the video, you see Chun-Li get a leg sweep to knock Ken down to virtually no health. At this point, if Wong lands any attack — even if Daigo blocks it — it’s a victory for Chun-Li. Daigo, realizing his dangerous situation, decides on a strategy that forces Wong to attack. Daigo also guesses that Wong will attempt to use Chun-Li’s super-combo, which will unleash a fury of kicks. To survive, Daigo will have to use the difficult parry technique to evade every single hit … which he does.

It’s a thrilling example of highly skilled gaming ability, and the crowd’s reaction really emphasizes just how amazing it is. Daigo went on to win the Street Fighter tournament at Evo 2014.

Don’t feel too bad for Wong, however, as he just won the Ultimate Marvel vs. Capcom 3 tourney at Evo 2014.