Google has a unique campus in Silicon Valley and the world. It was made famous in the comedy film The Internship starring Owen Wilson and Vince Vaughn. While it may seem familiar in tech circles, the wider world still does

I visited the Googleplex back in 2007 when I was a tech columnist for the San Jose Mercury News. Back then, it was fresh and crazy. It seemed like a combination of a college campus, frat house, socialist commune, and home away from home. People who don’t work there scoff at its excesses, like allowing dogs to come to work, or the free food. They’re jealous, for sure, but they may have a point about something. Google has made its workplace so enticing and relaxing that people will naturally want to stay at work longer and get more done. And they won’t take off for a startup down the street so easily.

This time, a friend took me through on an unofficial visit. I still recognized the old buildings that the company inherited from Silicon Graphics. But I was struck at how many more buildings Google’s Silicon Valley population of around 25,000 now occupies in the city of Mountain View, Calif. And it’s not done expanding, as it is building a new addition to the headquarters at the nearby Moffitt Field air base.

The main build is still named “42,” after the answer to the question, “What is the meaning to life, the universe, and everything?” That’s a joke from dearly departed Douglas Adams’ novel, The Hitchiker’s Guide to the Galaxy. There are still programming problems posted above the urinals in the bathrooms. The main café with the free food is Charlie’s Cafe, named after Google’s first chef, Charlie Ayers, who is no longer there. You can work off the extra pounds from the free food in places like the gym, which is filled with jogging machines, or the two infinity pools, where you can swim against a current of water without going anywhere.

While Google touts the egalitarianism that runs through its campus as going back to the roots of Silicon Valley, it is unlike most tech companies. At places like Microsoft, there are lots of office with doors. At Google, multiple people are packed into pods in the name of collaboration.

Today, the whole place is so much bigger than it used to be. You need one of the freely provided bikes or scooters to get around. And there are new amenities like statues of the Google Android mascot, soccer fields, giant chairs, a putting green, multiple slides, and a batting cage. Check out our photo gallery of Google’s campus below. 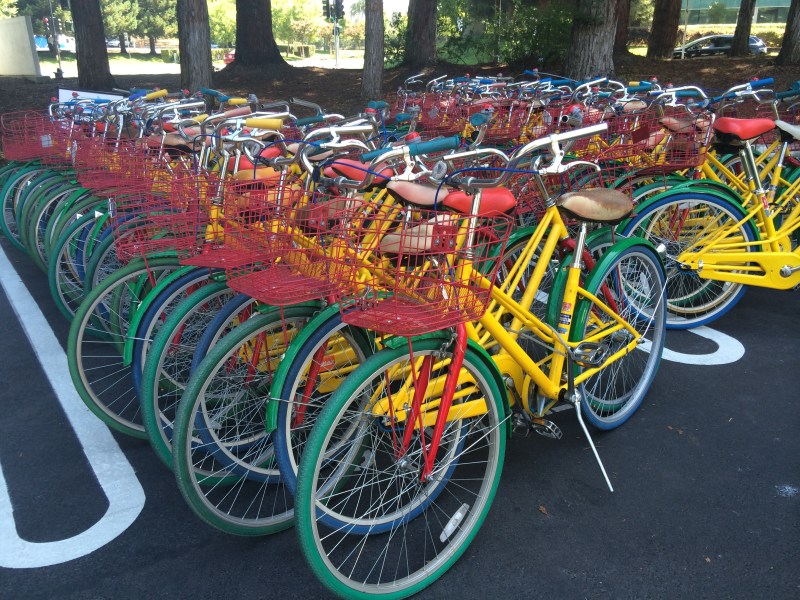 Above: Bikes bear the Google colors. You'll be easily spotted if you steal them.