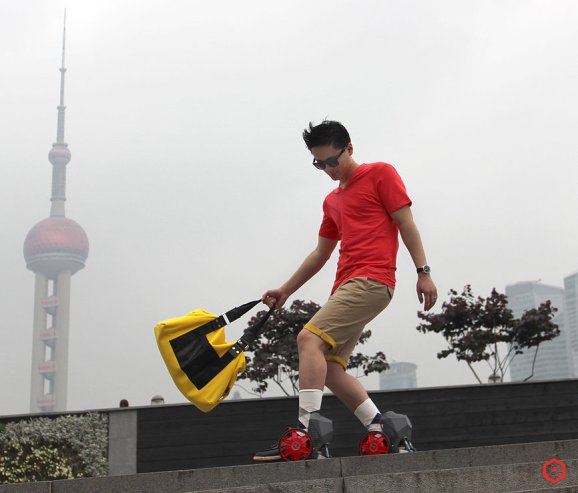 Acton RocketSkates are smart motorized skates that fit right over your shoes. Once they’ve been powered on, simply push off and the motors will take over to propel you forward. For accelerating, lean forward and for braking or stopping, put your heel down. This means that the rider has complete control over the motor without the hassle of a remote. With an app and Bluetooth connection, the skater can track their route and mileage as well as the progress of other Acton RocketSkaters in the area.

After less than three weeks out, Acton has raised over $300,000 from over 500 backers and still has several weeks to go. The two campaign stretch goals of $100,000 and $200,000 have been surpassed. Because of this, all backers will now receive Acton backpacks and helmets. Acton RocketSkates take the best of motorized transportation and app capabilities. While the skates themselves aren’t super stylish, their remote-less power is certainly desirable.

PadBot takes the idea of the telepresence robot and cuts down on costs by using a standard tablet computer as the brain and display of the device. Compatible with Android and iOS tablets for now, PadBot is easily controlled through a smartphone when it comes to driving, and can also angle and shift its display as necessary. The robot also has sensors on the base of the device to prevent being knocked over or bumping into things it can’t see. Designed to be simple to use on both sides of the interaction, PadBot has an intuitive, simple app and doesn’t get underfoot in the physical world at the same time. Whether collaborating at meetings in the office or attending birthday parties for out of town family, the PadBot seems versatile enough to tackle any indoor challenge (and even some light outdoor tasks).

PadBot’s Indiegogo campaign began on July 2 and will close on August 31, 2014. The goal is set for $30,000. One PadBot costs backers a regular price of $359.After three weeks, it has reached over 90% of its goal, raising over $27,000 from 80 backers. Telepresence robots are exciting ways to interact with workplaces and loved ones remotely, and the market space is beginning to grow to reflect that. This looks like an easy to set up, easy to use telepresence robot that offers fewer necessary components and a very attractive price point. A cheaper alternative to iPad Segwaybots from Double Robotics, PadBot not only has a cool premise, but is executed well in its sleek design and convenience.

Electric Objects is a computer designed to display art. Using apps and online databases, Electric Objects owners can change the image that the product shows. The screen doesn’t look like any traditional screen, making the EO blend in with other framed paintings and photographs. The frame comes in different colors and materials, just like traditional frames. With the app, it’s possible to change the image on the screen easily via Wi-Fi.

With about a week left to go, EO has raised over $550,000 with over 1,500 backers, blowing past its $25,000 goal. The reward tier that received the most backers was the $299 level that offers one white or black Electric Objects. Electric Objects has found a way for the beauty of art to meet the convenience of technology. With the vast gallery of images that its online library offers, this product demonstrates its amazing versatility. Its price is reasonable too, considering how much each new painting must cost.