Launched in 2003 by Linden Lab, it was an unprecedentedly wide and open free online world (which allowed real-money purchases). Complete with its own in-game currency, it was a virtual reality with no objective other than to let people build and do what they want, and people were obsessed with it. Second Life was on the cover of Businessweek, major brands like Disney and Amazon opened up virtual shops, and universities were re-created with classes to boot. By 2009, around 1,400 companies were using the space to hold meetings and conduct trainings.

But somewhere along the line, the excitement died. Companies started pulling out of the world. Updates were few and far between. What started out as a social network was replaced by new networks, not least of which was Facebook, which is “probably better, cheaper, and more reliable, and no doubt more accessible,” wrote Wired’s Mark Wallace.

Despite gloomy developments such as this, however, as many as 1 million people still regularly log into Second Life, a number close to peak users. What’s changed is a collapse in expectations and media attention. Also a shift in the in-game focus away from lectures and re-created life and toward sex clubs, dancing, and contests. Second life is having a “strange second life,” as The Verge’s Chris Stokel-Walker wrote last year.

Also, there is hope for a resurgence as Linden Lab develops integration of the Oculus Rift virtual reality headset.

I signed up for Second Life when it launched and played for a couple of days before deciding the world wasn’t for me. Intrigued to see what it’s like today, however, I signed up again and spent a few hours there last weekend. For help getting around, I recruited a woman who goes by the name Judy Brodie in the game, who has played at least 7 hours a week since 2004 and who met her real-life husband in the virtual world.

When I first logged in, I was dropped in a kind of beginner world full of other users. But there’s little to do there other than learn figure out the controls. I discovered I can fly, which is cool. I soon got the hang of walking (and flying) and tried to figure out where to go. Intrigued by talk of a “Game of Thrones” simulator, I teleported to King’s Landing. Fans of the show were there indeed, but they were talking to each other and ignored my greeting of “hey guys.” Nobody would talk to me, so I hit the road. The game glitched and I accidentally walked through a hill and ended up on this cliff, pondering what to do next in front of a giant sun. 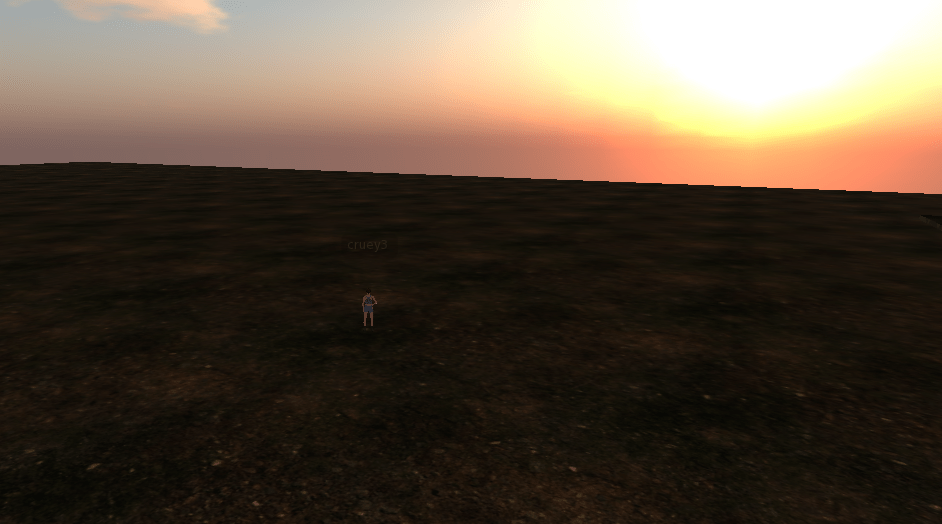 It was then then I decided to start at the very beginning. There’s an island in the game called Caledon Oxbridge, which is for beginners, or “newbs.” It lays out basic controls and shows you how to move around in the game. I read through the placards that showed me how to use basic controls. The signs encouraged me to join a group and ask questions. People here were friendlier. And that’s when my tour guide for the day, Judy Brodie, signed online.

Judy has been an active Second Life user since 2004. She’s spent at least 7 hours a week, if not more, in the game since the beginning. I asked her how it’s changed. “No flashy skins [back then] that made you look real, hair sucked,” she says. “The appeal back then was just meeting people.” 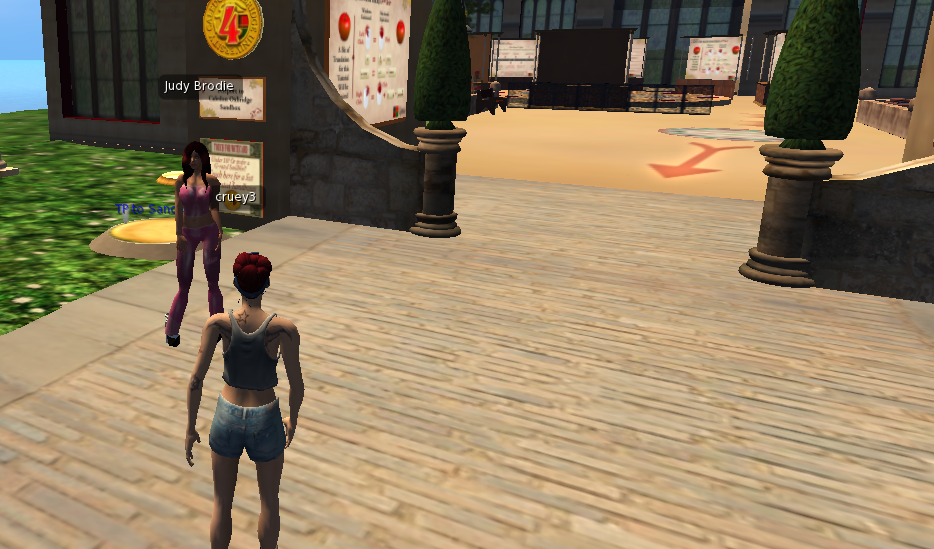 I ask her to show me what a typical day is like for her in Second Life. When she logs on, she checks out the events section to see if anything is happening. “It used to not be like this but if you look at events, most all the events are related to nightclubs and escorts,” she says. “Colleges are trying to take over with their own little islands and that might work, but right now it is all about entertainment.” When I open the events tab, I see listings ranging from night clubs to pornographic classified ads and little else. Yes, avatars can get naked in the game, with special nude skins available for purchase.

But there’s no time for that. We’re going skydiving. The first place we went to was Abbotts Airport, which has been around since the beginning of Second Life. That’s a plane that Judy has in her arsenal. Using a couple verbal commands, she took the virtual plane up in the air.

Once we got to a certain height, she gave a few more verbal commands, and the plane disappeared and we were “skydiving.” “I usually take four people up at a time,” Judy says.

The experience is strangely fun.

“Most of my hangouts no longer exist. That is the bad part of the game, people give up their rent,” Judy says, referring to in-game land rental. People who have premium accounts can buy land and then rent it, just like you can in the real world. After jumping out of a plane, we went to a different location, called a sandbox. This is where people can build whatever they want, kind of like in the open world of Minecraft. People build things, then enter them in contests. “See this train?” Judy asks. “I made him for a show and tell contest.” She won third place. This re-creation of Mr. Rodgers’ set earned her first place. That’s one of the ways to make in-game money — called Linden Dollars. “You do contests like best costume, best swimsuit, best body, or you become a stripper/call girl,” Judy says. “There are also casinos; bingo is really popular. If you are good at scripting/creating you can own a shop.” In the meantime, I was just trying to figure out the controls. I made a box. 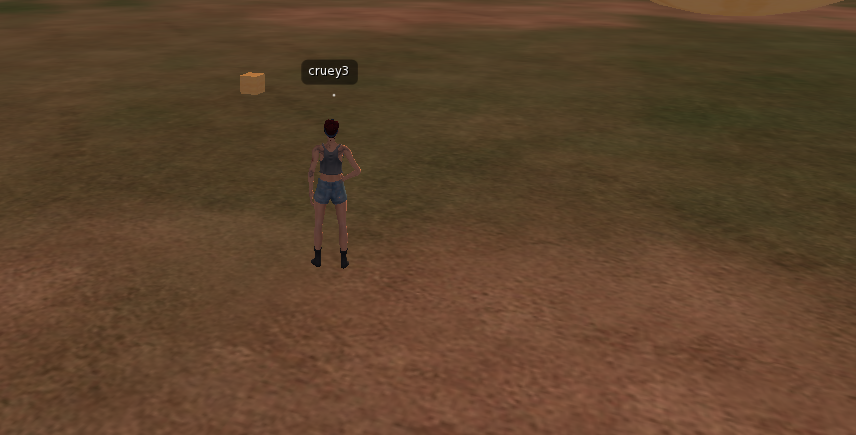 We soon got tired of watching me make boxes and made our way to the third location where Judy likes to hang out in Second Life: the clubs. I took a load off at a nearby bar. 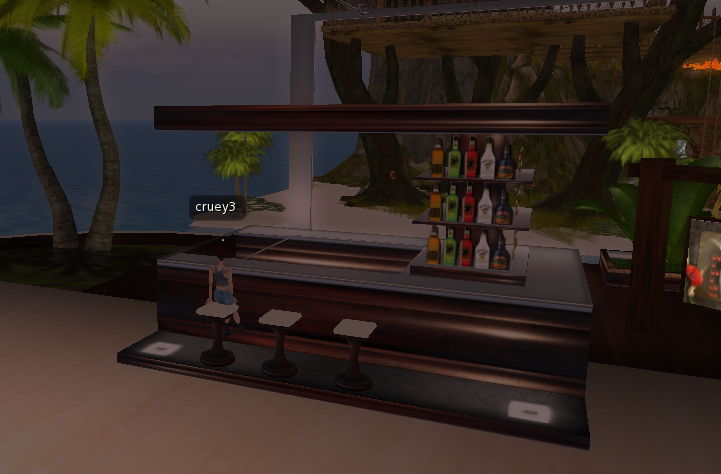 You can go here and equip your avatar with one of hundreds of dances and animations, all of which were made by someone in real life wearing a special motion capture suit. “Second Life is made up mostly of clubs now, and everyone wants to be the best dancer,” Judy tells me. 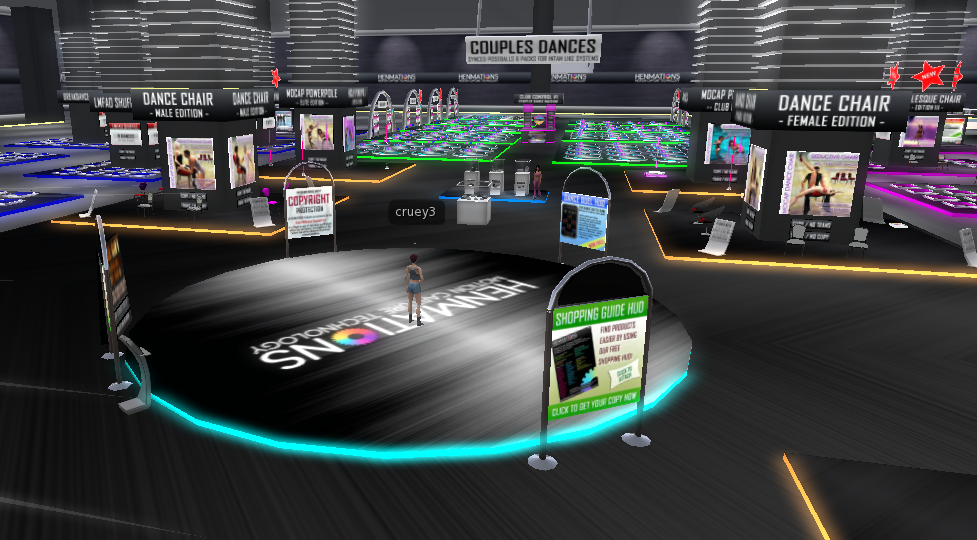 String enough dances together, and you can become a dancer in the game, working for tips. Clearly I need some more practice.

While I waited, I approached an avatar named AoiYami, who was dancing in an empty bar. AoiYami asked if I wanted to tip for “a good time.” I politely declined. “Do you make good money?” I asked. “Yeah,” AoiYami said. 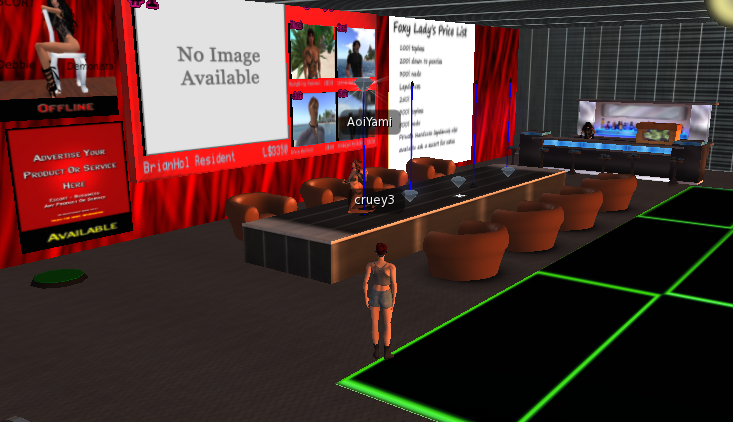 I ask Judy how she met her husband, who goes by the name Todd Lightcloud in the game. “Don’t laugh,” Judy says. “In a strip club on here.” A mutual friend introduced them in the game, and they started talking every day by phone and Webcam. A few months later, they were Second Life married, and two years later to the day, they were real-life married. 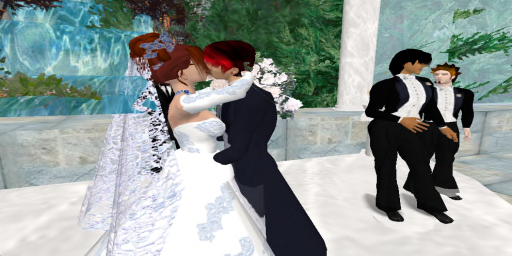 “When he proposed, he had me log into our Second Life house, which had a sign saying ‘Will you marry me?’ and while I logged on, he was getting the ring ready,” she says. She lived in North Carolina at the time, and he moved out there to be with her. They now live in the Bay Area. 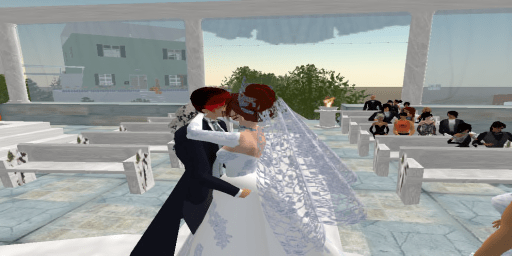 Our final destination was to hang out in this pool, where a skinny-dipping event was scheduled for later in the evening. While dancing on a pole, Judy tells me again why she likes the game “The appeal is to be something you are not,” Judy says. “I don’t look like this, and [my husband] doesn’t look like Todd. In real life, I’d never go skydiving, fly a plane. Or dance on a pole.”