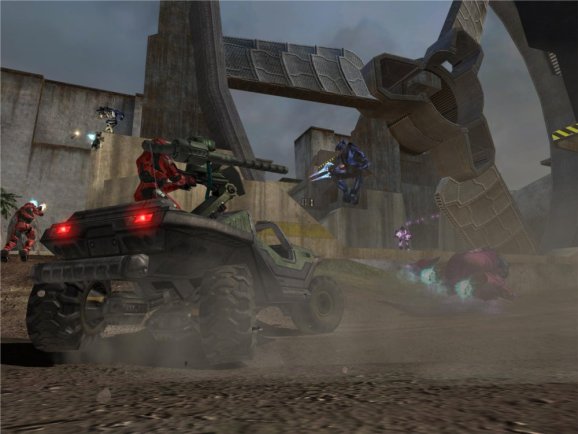 Halo 2 is a pioneer for online console gaming and one of the best titles released during a great year for the medium.

In 2004, the idea of a video game console as an all-in-one multimedia machine was that it played CDs and DVDs. Online play and downloadable content were mostly for PC players. Many games didn’t even have widescreen support. But those modern conveniences don’t matter when you consider the quality we got that year.

Sony’s PlayStation 2, Microsoft’s Xbox, and Nintendo’s GameCube battled each other as each console delivered some of their best exclusives ever. Players took their first steps in World of Warcraft’s Azeroth, and Nintendo released its two-screen DS handheld. Underneath these headliners are smaller milestones like the debut of Sonic the Hedgehog as a multiplatform star and the current “Zero Suit” depiction of Metroid’s Samus without her armor.

To celebrate one of the best years in the medium’s history, we are reminisce about our favorite games and discovering what happened to their respective franchises and developers.

Note: We’re listing these only by the platform(s) they originally debuted on.

At the gaming magazine that I used to work for, EGM, we used to set up 16-player sessions of the original Halo: Combat Evolved. But this was in the pre-online days. That meant four televisions, four Xbox consoles, 16 controllers, and a whole mess of hubs and networking cables, all within close proximity of each other. It was incredibly fun — but not very practical. Can you imagine our excitement over the prospect of a fully online Halo that we could play whenever we wanted, from the comfort of our worn-out couches? Halo 2 delivered that plus a surprising dual-protagonist storyline for the single-player game (though I’m still not sure what’s up with the giant plant creature). I don’t want to think about the amount of hours I put into shooting Spartans and Covenants back in the mid-2000s.

Where are they now? Halo developer Bungie is finishing up Destiny, a multiplayer sci-fi shooter for new-generation systems. Meanwhile, Microsoft’s internal studio, 343 Industries, is continuing the Halo legacy with part five (due out in 2015) plus the Master Chief Collection, a compilation of past Halo games (yes, including the legendary Halo 2) for Xbox One.

Above: Snake’s mission depends on his ability to make the wilderness his ally.

The only other game I remember buying with my own money in 2004 (I was still in high school, so I relied on any funds I had left from birthdays, Christmases, and the occasional allowance) was Metal Gear Solid 3: Snake Eater. Metal Gear’s penchant for melodrama can get a little crazy at times, but I thought the tone was perfect for Snake Eater’s 1960s setting — hell, it even had a James Bond-like intro replete with bombastic visuals and a ridiculously catchy song. I loved sneaking through the jungle and hunting animals for food. I also remember getting really mad when I found out that the food in my inventory became toxic if I didn’t play for a few days.

Above: Carl “CJ” Johnson remains one of the few black main characters to star in a blockbuster release.

Grand Theft Auto III shocked the world with its go-anywhere, do-anything gameplay. Players loved its sequel, Vice City, with its neon-infused, ’80s decadence. But San Andreas is still my favorite in the series. Three cities with distinct personalities (and miles of playable territory in between), hundreds of collectibles, personal relationships, minigames galore, territory control games … just thinking about all this is making me want go back and revisit this epic campaign.

Where are they now? Rockstar is still making boatloads of cash with this series. It’s providing steady updates to the online portion of Grand Theft Auto V, but we have no word yet on the next sequel.

Above: The Hell-Knight: Still ugly as sin after ten years.

Doom 3 was a reboot of the original Doom that brought back the scary feeling of being alone in the dark with a demonic beast. It ran slower at 30 frames per second, but it delivered more realistic shadows and lightning that set the bar for outstanding 3D graphics. The beast ran out of the darkness, giving gamers nightmares for years to come.

Where are they now? Good game franchises get a reboot once a decade or so. ZeniMax, which now owns id Software, and its Bethesda Softworks division recently unveiled a preview of Doom 4, which has been renamed Doom.

Above: Even the platformers were packing heat in 2004! Only Sly Cooper (center) preferred wits and a good cane whack over guns.

The PS2’s greatest strength was catalog of great games for any genre, and some of these even challenged Nintendo’s dominance with platformers. The third Ratchet & Clank game expands on previous entries of the run-and-gun series with more crazy weapons that you could level up, new sidescrolling stages staring the faux superhero Captain Qwark, and online play. The second Sly Cooper made the thief’s comrades, Bentley and Murray, playable and abandons the straight-forward stealth action of the first in favor of missions that lead up to a heist worthy of Ocean’s Eleven. Finally, Jak 3 finishes off the Jak & Daxter trilogy by placing its heroes into a Mad Max-style wasteland that requires extensive driving to navigate, which adds even more to a gameplay concoction that already combines platforming, shooting, and more.

Where are they now? Over the next two years, both Ratchet and Sly will star in animated movies that will hopefully take advantage of the clever humor that made each series endearing. Sony has also released HD trilogy collections for all three franchises on the PlayStation 3, and they continue to make cameo appearances whether as fighters in PlayStation All-Stars Battle Royale or as pre-order costumes in Little Big Planet 3. Finally, developers Insomniac Games, Sucker Punch Productions, and Naughty Dog have all created other successful series such as Resistance, Infamous, Uncharted, and The Last of Us.