More than 40 million Americans play fantasy football. They play it on their computers at work, on their laptops at home, and on their tablets on the couch. And, yes, some even check their teams on their mobile phones while on the toilet.

Microsoft gets that. And the maker of the Xbox One wants you to do all of this on your other throne — the living room recliner — while watching the NFL and playing fantasy football on your video game console.

For the 2014 season, Microsoft has a slew of new fantasy football and viewing options in store for its NFL app. It intends to make the Xbox One a more attractive option for watching highlights, getting updates, and keeping with news on the nation’s most popular sport. This includes live coverage that it says you won’t get anywhere else, fantasy football scoring alerts tailored to your preferences, live NFL Network programming, DirectTV’s premium Sunday Ticket for people who live in areas that can’t get the satellite service, and the cherished NFL Films vault, which contains decades of coverage of what’s become “America’s game.”

“People that are big NFL fans, and having the NFL Films library at your fingertips and be able to go through and find the content you want to watch in a single destination, we think it’s going to have a lot of value for fans this year,” said David Jurenka, the executive producer for Xbox Sports in a recent interview at Microsoft’s South of Market lounge in San Francisco.

The app updates will come right before the season begins, Jurenka said — Aug. 28.

Are you ready for some fantasy football? 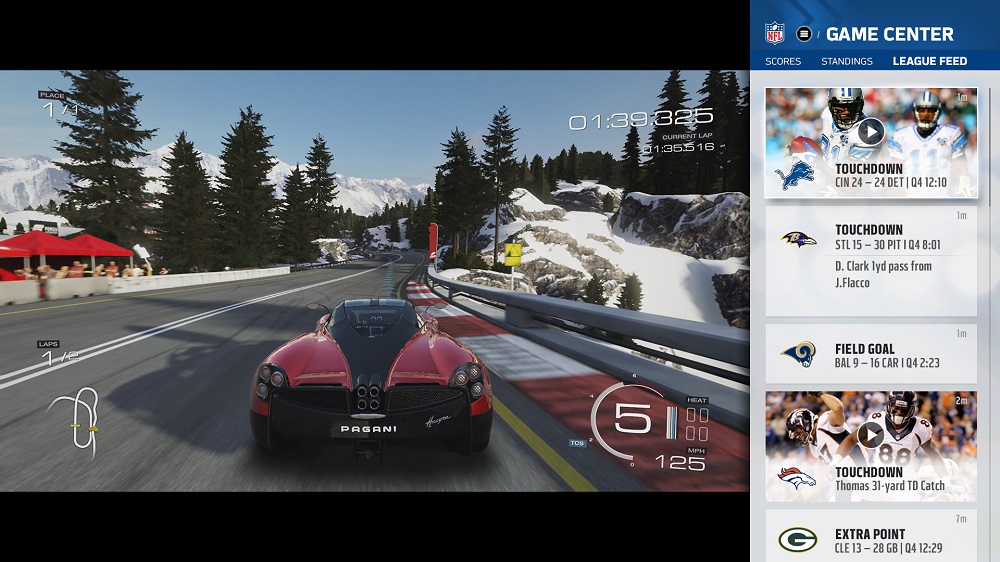 Above: Look, ma, no hands (well, for the NFL fantasy stuff, as you can use voice commands to control it).

Making a play for the fantasy football crowd on a video game console may not seem logical to some, but many of the demographics between people who dig spreadsheet pigskin and video games are the same, as stats show from the Fantasy Sports Trade Association and the Entertainment Software Association.

And the most interesting of the Xbox One’s new offerings might be DirectTV’s new take on its Red Zone, which is a channel that shows when teams are about to score. This new thing is Fantasy Zone, and it follows when fantasy-relevant players are in potential scoring situations.

“They are [whipping] around doping live look-ins. Instead of focusing on the score, they focus on fantasy,” Jurenka said, “… tracking more closely what’s going on in the fantasy world and bringing that front-and-center.”

Red Zone sometimes showed fantasy stuff, but Jurenka said it was just a “flash about what’s going on in fantasy.”

This changes with Fantasy Zone. But instead of just tracking the a half-dozen games (sometimes more) at a time, this new “zone” watches a few fantasy-relevant players from each team playing (well, maybe no one from the sad-sack Jacksonville Jaguars). It poses quite a challenge.

“I think they’re asking some of the same questions,” Jurenka said. “I think this is what they will likely do: There are players that lots of players have [that they will track], and they will start with that approach, and then there will be people who break out in Week 6 and score 40 points, and they’ll go deep into that angle.”

The Fantasy Zone will also discuss how these breakout players influence the waiver wire, injury updates, and lineup changes. Jurenka, however, said he wasn’t sure if the Fantasy Zone would have the same coverage as the NFL Network does during the season.

Microsoft is also in talks to add more fantasy football league providers to the NFL app. Right now, it just has the NFL.com. “They are ones you would expect,” Jurenka said about the potential new partners. I scribbled down “Yahoo,” one of the big three fantasy football options, on the back of my notebook and flashed it to him, and he and Microsoft Xbox and Surface PC manager guffawed. “The big leagues you expect, the one you wrote down, the one you just mentioned [ESPN], another big one as well — we’re working hard to bring those to Xbox this year. We’ll see how far we get.”

That other big one is likely CBS.com, one of the big three in fantasy football.

So, it’s an NFL Sunday: how does this all work? 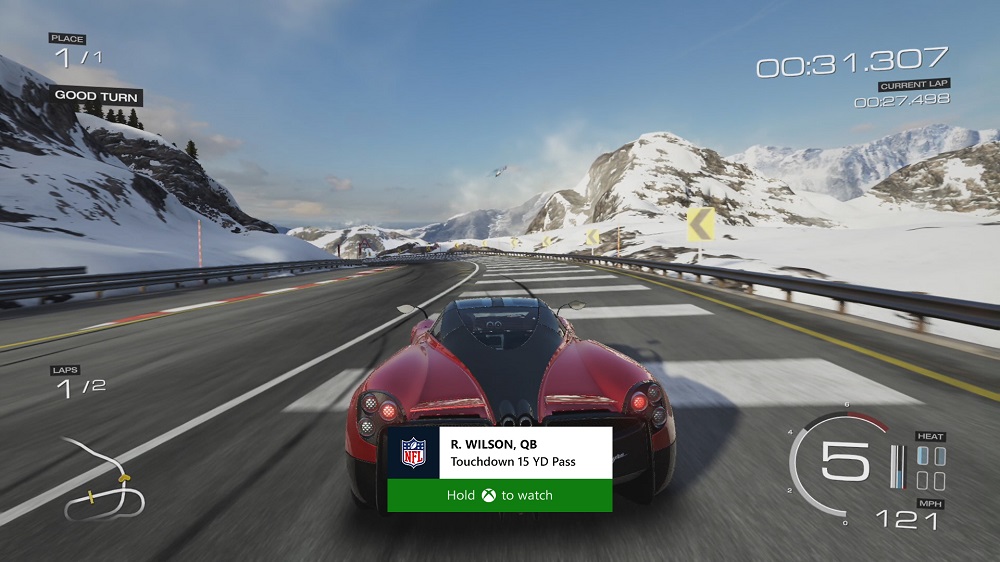 Above: Hopefully, that fantasy football notification at the bottom of the screen won’t make you screw up whatever you’re playing.

You’re watching a football game on your Xbox One (I saw a rerun of the New England Patriots and the New York Jets). You can now get notifications at the bottom of screen when one of your fantasy players score. You can click on it with the controller (or mouse on a Windows PC or with a touch on a tablet, as the NFL app works on those platforms, too) or use the console’s Kinect-enabled voice commands to “snap” it to the right top-corner of the screen. This happens while the Pats-Jets game continues in the main screen. Jurenka said these highlights are exclusive to Microsoft (though I wonder how exclusive this really is, as a scoring highlight from CBS, NBC, Fox, or ESPN is going to be plastered on anything that shows what’s going on in the NFL).

You can also customize these notifications among the fantasy teams you’re tracking (up to eight), but you can’t for your players on those teams (well, as for now). The NFL app also has a carousel that updates in real time, scrolling through what’s going on in the NFL or your fantasy teams. This plays when you’re watching TV on your Xbox One, streaming Netflix or other services, or playing a video game (though I imagine it gets pretty meta if you’re playing Madden while watching NFL highlights). “You see a TD here, an INT there. It feels like a Twitter stream of content,” Jurenka said.

This idea behind this is a streamlined experience. But isn’t someone who’s watching football on an Xbox One going to be pretty hardcore into sports and games?

“As we go forward and sell more boxes, we’re going to have a more mainstream audience, and we’re trying to create more ‘lean back’ scenarios to for that want to watch TV and have this experience come up,” Jurenka. “We feel it’s very different from the ‘lean forward’ that you get on your phone. We’re trying to entertain you without you being the person that drives the entertainment.”

And this appears to be the intent here — not to cater exclusively to hardcore fans, but to get people to set down their so-called second screens and focus on the big TV.

“We’re trying to create this hub-like experience that will dynamically update based on what’s going on around the NFL and your NFL team and you’re doing less work and we’re doing it all on your behalf,” Jurenka said. “Last year, you were able to look at the basics that you would want as any fantasy fan, look at the matchups, look at my team, do basic team management here. If I see I want to put Torry Smith or Randall Cobb, I can do all of that basic management here instead of pulling out a separate device and making all of that happen.”

After all, the last thing you want to do is put more effort following fantasy football than getting off the recliner to get a beer.