SHANGHAI — Hearthstone: Heroes of Warcraft is one of those rare free-to-play games that has succeeded on both the PC and mobile devices. It has been downloaded more than 10 million times and earned an 88 out of 100 ranking on review score aggregator Metacritic.

Publisher Blizzard Entertainment hasn’t said how much money Hearthstone is generating, but it’s considerable. One analyst estimated that this digital card-battler and Heroes of the Storm, an online arena-strategy game in the vein of League of Legends or Dota 2, could generate $200 million in revenue in a year. That represents a huge stride in the transition from traditional to digital games for Blizzard.

One of the reasons Hearthstone has done so well is that Blizzard spent a lot of time crafting it for both new players and hardcore Warcraft fans, according to Hamilton Chu, the executive producer of the game at Blizzard Entertainment, a division of Activision Blizzard. Chu talked about a lot of lessons they learned about game design in a recent talk in front of a big audience of Chinese game makers at the ChinaJoy Expo in Shanghai. The multibillion-dollar Chinese online and mobile game markets are a big opportunity for Hearthstone, and Chu’s talk had an addition motive: to stoke interest in the game.

Above: Hearthstone: Heroes of Warcraft celebrates each win.

Chu said that Blizzard’s team created cardboard playing cards almost every day during while designing Hearthstone. They knew they would convert those cards to digital later, but they could easily print them out and play games.

“It let us get rid of bad ideas as fast as possible and hopefully move on to the good ideas,” he said. “We took six or nine months and focused on pure design time. We let other concerns sit on the sidelines. You sit down at a table and start playing.”

Iterating fast on new versions enables the team to come together quickly and figure out the roles for each person. Making changes to the paper-based design early on is a lot less expensive than doing it later in the design process. 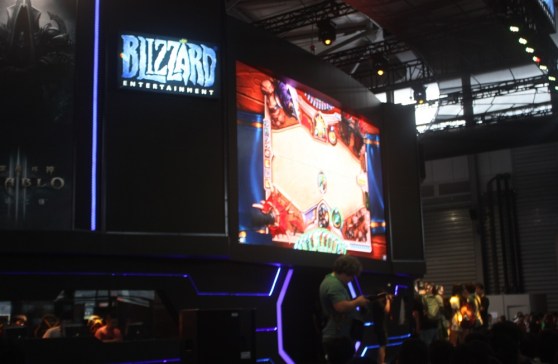 Above: Hearthstone’s Curse of Naxxramas adventure on display at ChinaJoy in Shanghai.

Blizzard also created an Adobe Flash-based prototype. That was based on a technology that wouldn’t be in the final mobile and PC platforms, since the animation quality just wasn’t up to par. But it helped the team visualize the user interface. And once the designers were happy with the user interface, they could hand it off to the engineering team to code in the Hearthstone’s real platform, Unity.

“That ended up saving so much work,” he said. “This let us look at interface issues.

Game design leaders should communicate their vision far and wide in a way that is memorable. Most team members forget or ignore design documents, so the leaders must create simple ideas, or “stakes in the ground,” about what the game is to be all about.

The designers wanted Hearthstone to be approachable, safe, and immediately fun for both old Warcraft or card fans and new players. Blizzard captured these ideas with phrases and funny pictures.

“Make sure people are working on the same game,” Chu said. “If the game is not coming together, people need to be told. They will be angry if they are working on things that have to be thrown away. It’s just a bad scene.”

Under this kind of design process, everybody could be a designer and contribute their ideas.

Above: A typical match in Hearthstone.

Blizzard’s team decided it didn’t want to make a card game like others that preceded it because those games are too complicated. As an example, other games forced you to follow a certain order for actions, and that meant you had to learn them. In this game, they obviated the need for a big tutorial by letting players do things in any order.

The team also got rid of constant resource management, which took you away from the action and wasn’t that fun. It slowed down the turn and didn’t contribute anything. It also tested ideas that gave players powerful surprise attacks. But the attacks proved too decisive in ending matches, and so Blizzard took those out.

Chu said that Blizzard distinguishes between complexity and depth. It wants players to enjoy games, like World of Warcraft in its 10th year, for decades. It enables that through depth, but not complexity.

Complexity is about all the different things you need to understand before you can make decisions in the game. Depth gives you a wide range of options to take once you understand the game.

Above: Be careful with those Spores.

Complex games often require tutorials, but players skip them and then suffer a royal beatdown a new game. After that, the chances are they will never come back. Chu said the team opted to get players into the action first. Then the game gives them more things to learn about as they progress. Some fans didn’t like that because they discovered new powers like Secrets later in the game than they expected.

Hearthstone is a digital card game, not paper, so it should do things that paper-based that you can’t do. In one example, Chu noted that when one Minion character dies, a card can revive it and put two Minion replacement cards in your hand. In a paper-based game, that would be obvious to an opponent. But not so for a digital game.

8. Don’t change too much

Players know how to play card games, so you don’t have to change things they are familiar with, like coming up with a different name for “attack” or “health.” This helps reduce the “mental friction” it takes to play a game, Chu said.

Above: You can hop into Hearthstone and buy Curse of Naxxramas right now.

Chu said he always remembered the first time he went on a raid in World of Warcraft. It turned out badly, but he got enough help from other players to make the experience fun and memorable. He tells the story of what happened on that raid with relish, and he wanted such tales to come from Hearthstone, too. So Chu’s team created cards that directly supported player stories.

Hearthstone is designed so that the player feels like they are inside a warm pub, playing a game. But there isn’t much more done to convey the story via cinematics or movie-like videos. Chu said that shows that you need to supply enough story and emotion in a card game, but not too much so that it becomes unwieldy and less fun.

To balance the emotion in games, you have to pay attention to whether a player is experiencing just negative or positive feelings in a match. If it’s too one-sided, the player may become bored or frustrated.

Games like World of Warcraft provide a stream of fun. In a 1-on-1 card game, someone wins, and someone loses. With Hearthstone, the designers gave you lots of little victories and little setbacks. So sometimes you feel like you were winning or losing. This constant back-and-forth keeps the player engaged and feeling a range of emotions throughout the game. That becomes more memorable. 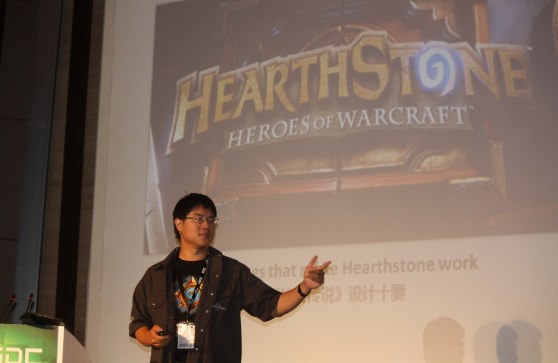 Above: Hamilton Chu, the executive producer of Hearthstone at Blizzard.