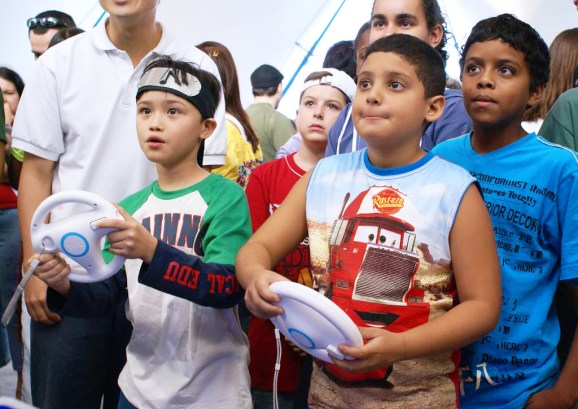 Kids that played some video games were better adjusted than those that don't game.

Children who play video games for an hour or less a day are happier, more sociable, and less hyperactive than those who don’t game, according to an Oxford University study.

Experimental psychologist Dr Andrew Przybylski conducted the study, published in the Journal of Paediatrics, which surveyed 5,000 British children aged 10 to 15.

Dr Przybylski concluded that “young people who indulged in a little video game-playing were associated with being better adjusted than those who had never played or those who were on video games for three hours or more.”

Kids who played for an hour or less a day had the highest levels of sociability and were most likely to report satisfaction with their lives. This group “also appeared to have fewer friendship and emotional problems and reported less hyperactivity than the other groups,” according to  Dr Przybylski.

Kids playing for moderate amounts of time — one to three hours a day — seemed unaffected by their hobby, but those playing “excessively” — for more than three hours a day — were the least well-adjusted group. Dr Przybylski suggested that this could be “because they miss out on other enriching activities and possibly expose themselves to inappropriate content designed for adults.”

These negative effects were small, however, and Dr Przybylski said that “high levels of video game-playing appear to be only weakly linked to children’s behavioral problems in the real world.”

Dr Przybylski told the BBC that research into gaming is often “polarized between those who believe games have an extremely beneficial role and those who link them to violent acts,” adding that “this research could provide a new, more nuanced standpoint.”

Although the study did not focus on or recommend any particular games for children, Dr Przybylski told WebMD that “past research done by myself and other researchers would suggest that open-ended, ‘sandbox’ games such as Minecraft, SimCity, and Kerbal Space Program are good picks.”

Don’t start to think that games on their own are the key to a happy life, though. Dr Przybylski pointed out that other factors, such as the strength of family relationships and happiness at school, actually play a larger role in determining children’s well-being.