Amazon’s Fire Phone has five front-facing cameras, one for selfies and then one in each corner to track the motion of your face.

That head-tracking enables a feature called “dynamic perspective” that Amazon is hoping — combined with some original games — will set the Fire Phone apart from the dominant iOS and Android smartphone platforms. I got one of these gadgets and tested out this futuristic technology. It’s the only phone with this capability, and maybe that’s because it isn’t as amazing as Amazon claims.

Delays prevent dynamic perspective from delivering on its potential

Dynamic perspective is trying to make the display of the Amazon Fire Phone act like an actual window. When you look through a door frame or out of a car, you can get a different view on the world depending on where you position your head. The Fire Phone tries to fake that feeling by tracking your head with the front-facing cameras. If it knows where your eyes are, it can re-render the onscreen image for your new perspective.

It doesn’t work. I never had the sensation that I was looking through a portal due to a few issues.

When I move my head or move the screen in relation to my eyes, the image does twist and alter, and it always ends up pretty close to the correct perspective … eventually. But the effect is not instantaneous. Instead, the image doesn’t start updating until after a noticeable, ever-present quarter-second delay.

This completely destroys any resemblance the feature may have to looking around the real world. Instead, the effect is wobbly and cheap.

Since the dynamic perspective doesn’t really work as advertised, it ends up feeling like you’re controlling the in-game camera with your face or by tilting the phone. Above: To-Fu Fury for the Amazon Fire Phone.

In To-Fu Fury, which is a kind of platform-puzzler game, it helps to look around the levels to see where the different collectibles are hidden. However, the camera automatically adjusts to reveal what’s up ahead of you when you’re preparing to launch your character — and that works better than the tilting.

In every game I tried it in, dynamic perspective just felt like a really inefficient way to look around the world.

The biggest problem with dynamic perspective isn’t that it doesn’t work. It’s that it actively makes games worse.

Amazon’s Appstore has a category for games that support the feature, and I was excited to find one of my favorite mobile games in the list: Bridge Constructor Medieval. This engineering simulator works great on my Nexus 7, and I hoped that Amazon’s 3D-like effects would add a touch of immersion to the experience. 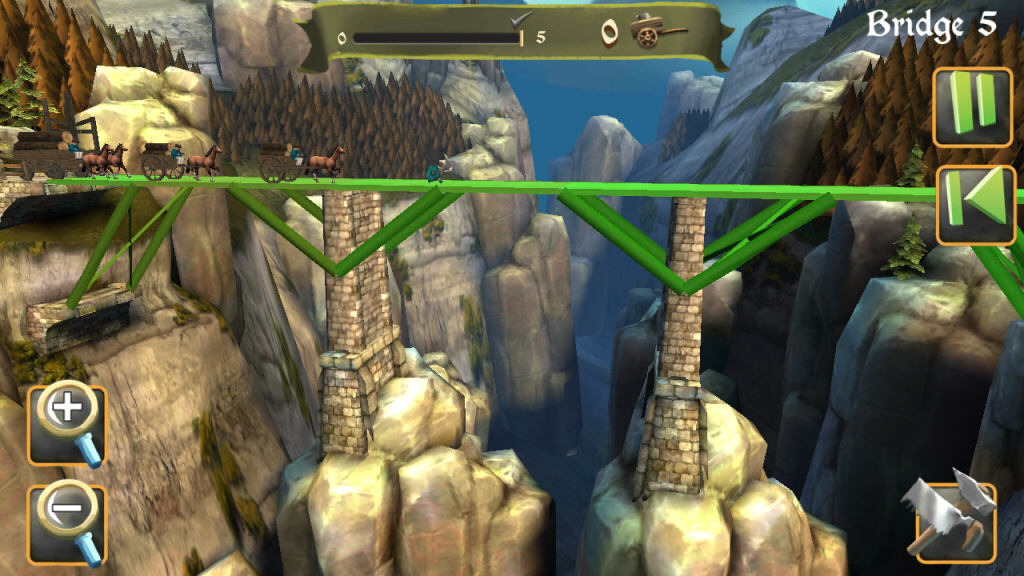 Above: Bridge Constructor Medieval is also on Amazon’s new phone.

It didn’t. Instead, the dynamic perspective was so sensitive that every button press and every tiny movement of my hand, body, or head caused the background to vibrate. This makes the game really uncomfortable to look at. Maybe, if it weren’t for the delay, I wouldn’t notice it as much. But as it is right now, the shaking feels like someone else is sitting next to me and purposefully jamming their hand on some unseen camera-control analog stick.

The Appstore and everything else

Amazon has already worked with some developers to get some original Fire Phone games on its proprietary Android app market, and the Appstore has a couple thousand other games as well. Despite that, you’re crazy if you buy the Amazon Fire Phone with gaming as a top priority.

Android proper, with the Play market, still takes some time to get all of iOS’s gaming leftovers. Some of the best iPhone games from years ago, like Tilt to Live, still have never even shown up on Google’s mobile operating system. The Amazon Appstore, meanwhile, doesn’t even get all of the games on Google Play despite the fact that it is also Android.

With the Fire Phone, you may likely find yourself hearing about a cool mobile game only for it never to make its way to your platform. Other times, you may have to watch as a game breaks out on iOS only to get ported to Google Play months later and then finally Amazon months after that.

As a Fire Phone owner, you’re dealing with an app market that has a fraction of a fraction of the games while also placing a distant third or fourth in terms of importance for developers. The original games that Amazon is producing, while neat, probably won’t make up for that.