The gym of the future will know if all your hard work is paying off.

The next generation of health trackers is moving beyond counting the simple movements of walking or running and will soon be able to recognize every type of movement, from pushups to squats. Last week, I tested out an early version of the Amiigo wristband, which is an early avatar of this next generation.

The Amiigo was the breakout star in athletic trackers when it crowdfunded $90,000 in 2012 to jumpstart its ambitious goal.

Two years later, Amiigo is getting ready to launch into a crowded market of competitors, from the Atlas to the Moov. But, up until now, we didn’t even know if it was possible for a commercial athletic tracker to automatically to record gym exercises.

I can verify: It’s possible, and it will change the nature of fitness in two big ways:

Here’s a brief explanation of how the Amiigo works and how it will lead to big changes.

The Amiigo is a wrist and shoelace combo, so it can capture both lower and upper body movements.

There are near infinite ways to exercise. Just within pushups, there’s diamond (hands close together), military style (elbows parrellel to the torso), or the standard elbow. And nearly everyone’s body will look slightly different while performing them. 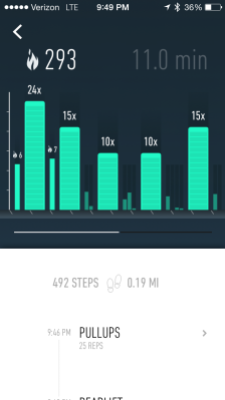 The Amiigo doesn’t officially ship until 2015, so it’s not quite a polished product yet. I took it through a Crossfit-style workout: 2 minutes of stationary bicycle sprints, 10 deadlifts, 10 pullups, 40 air-squats, and 15-25 pushups (2 rounds total).

The Amiigo only recognized about half the movements and rarely got the number of reps right.

Additionally, as the Amiigo and its competitors collect more information, the universe of fitness gear will collectively get smarter at recognizing movement. Eventually, after thousands or millions or users feed the database, you won’t need to pre-train it to recognize your exercises.

The payoffs of exercise

Exercise is supposed to have all sorts of benefits. It’s not just about a sexy mid-section. Exercise improves sleep, intelligence, emotional stability, and overall health. It makes us the best versions of ourselves.

But we really only know this from isolated studies. The research doesn’t give us enough information to fine-tune exercise for our own goals.

We really don’t know, and the answer likely varies from person to person.

But technologies like the Amiigo are coming close to giving us this invaluable information. The Amiigo collects data on resting heart rate, heart-rate variability, sleep quality, and total steps. This gives is a much better picture of our daily total stress and activity level.

As the algorithm gets more intelligent, it’ll automatically spot patterns in how fitness and quality of life go hand-in-hand.

All the devices will feed into super-intelligent databases, currently being built by Apple and Google. Apple’s Healthkit and Google’s Android Wear platform will collect health information and encourage software developers to design systems that feed recommendations from users.

Already, startups such as Gero claim to be able to diagnose serious illness from the activity captured on a Fitbit.

For fitness nuts, some convenience

Recording data manually is a real pain the ass. I do it because it’s my job (and I’m a geek). But a lot of people who work out never record the date, number of reps, weight, or distance. We put a lot of effort into working out, but unless we track progress, all that sweat could be for naught — analytically speaking, that is.

The Amiigo, and Amiigo-like products, will do all the recording automatically. No futuristic super-intelligent algorithm needed. We’ll know immediately if we’re slacking off or hitting our all-time record.

Sometimes it’s just as simple as knowing how much I lifted last week so I can try something heavier the next time around.

The partnerships possibilities are equally as cool. Imagine high-end gyms simply giving out an Amiigo to their customers as soon as they come through the door. Boot up the app and it’ll instantly tell you your workout for the day and the goal. Drop it back at the desk when you’re finished.

It also opens up the possible of concierge services. Instead of pressuring gym-goers into private lessons, if a gym sees that a customer’s improvement has plateaued, they can dispatch a helpful coach to give some tips.

Amiigo, in the near term, just makes fitness a more convenient and productive part of our lives. And that’s a gadget I can get excited about.