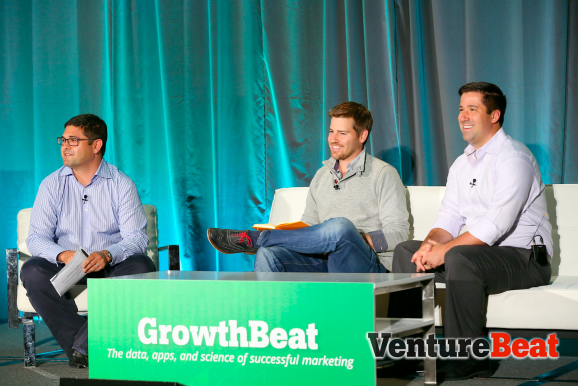 “If you have 100 [app] installs, 90 are doing nothing,” Kahuna chief executive Adam Marchick told the audience at the marketing tech conference. Eight or nine are “doing something” in terms of engagement or conversion, and only one is proving valuable, he said.

“The way to change that is through mobile messaging,” Marchick said. Then he unveiled the launch of the company‘s Onboarding Campaigns for providing what the company describes as “a personalized engagement journey” for apps.

230 app developers with 9,000 apps and 397 million MAU
told us what works best in mobile user acquisition

Joining Marchick on a panel about this problem of inconsequential app installs was Chris Erickson, chief operating officer of Apartment List, an apartment-finding service that has used Kahuna’s Campaigns.

“The way people are going to engage with us on a native [app] is different from the Web or mobile Web,” Erickson noted. He said he realized that “people would open the app and then wouldn’t” contact a broker to see an apartment.

Kahuna’s Onboarding Campaigns uses real-time analytics to push messages related to specific features, at an appropriate time. The campaigns are based on the user’s actions and the time windows, such as the initial seven-day period after an app has been installed.

“We’re seeing how that first seven days [are] critical for a lot of apps,” Marchick told VentureBeat in an interview, since the user is potentially open to messages about how to use their new acquisition. He added that mobile engagement is “moving beyond trigger-based, [if/then] campaigns,” with Kahuna relying more on “behavioral rules.”

It “cannot just be a generic welcome,” Erickson pointed out, since a stream of less-than-useful messages will annoy the user.

“A lot [of an effective campaign] is learning when not to send a push,” Marchick told the audience, “such as when a user is actually looking at an apartment. For people who have contacted four brokers, the answer is not to send them to a fifth.”