It’s time for your rampage through Hearthstone’s Curse of Naxxramas adventure to continue! This week, Blizzard releases the diabolical Military Quarter, but don’t worry; we’re here to help you with this guide.

You can learn what you need to know about the Military Quarter, or you can find info on the rest of the (currently released) expansions below. Note that all these of strategies deal with the bosses on the Normal difficulty. 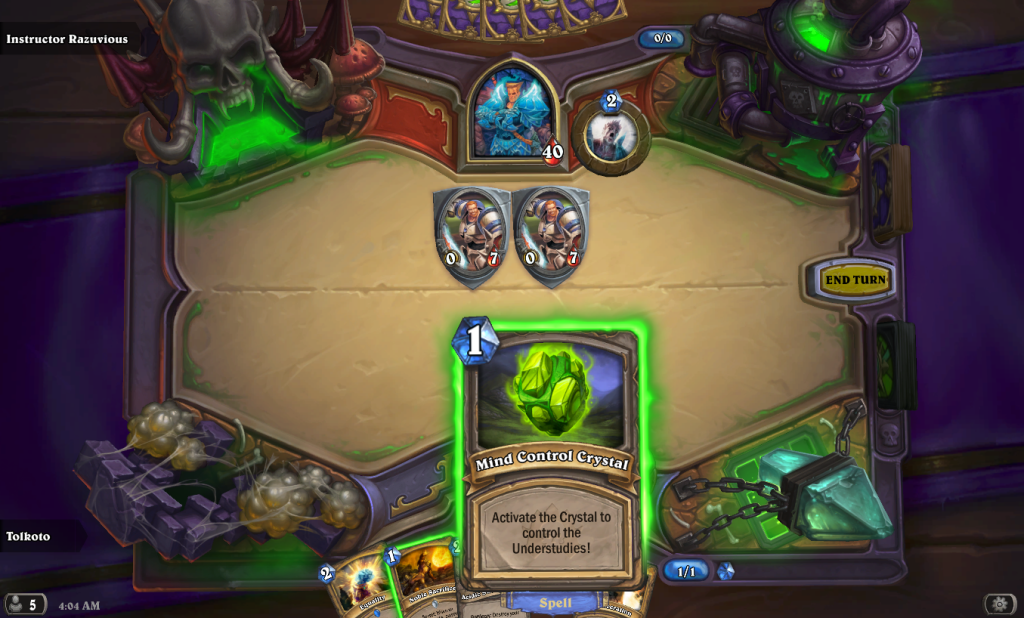 Above: You’ll want to use that.

Razuvious starts with 40 health and two 0/7 minions with protective taunt on his board (these guys are called Understudies). However, you start with a 1 mana spell called Mind Control Crystal that, when played, takes control the Understudies. Razuvious also has a 2 mana weapon, the Massive Runeblade, that does 5 damage and has 2 durability. However, it deals double damage to your hero, so it’s a good idea to steal his Understudies early so you can use them to protect yourself.

You’ll also want some other cards with taunt in your deck to keep him from doing weapon damage to your hero. You could also use secrets, like the Paladin’s Noble Sacrifice (which summons a 2/1 minion to take damage instead of your opponent’s intended target) to protect yourself. Be careful, though, because he also has a Black Knight in his deck, whose Battlecry (a power that activates immediately when a minion’s played) destroys an enemy minion with taunt.

As for his Hero Power, it’s basically a better version of the Mage’s Fireblast, although it does 3 damage for 2 mana. He can use it to quickly take out weak taunt minions, so make sure you either have a few of them on the board or ones with lots of health. If you take the taunt route, the Druid deck has beefy minions like the Ironbark Protector (8 attack/8 health) that can withstand Razuvious’s Hero Power. Above: Watch out for those Spectral Minions.

You can deal with all these Spectral minions a few different ways. You can use silences or transforming spells on the Unrelenting minions to make sure they can never trigger their Deathrattles. You can also use buffing cards like the Paladin’s Blessing of Kings or the standard Defender of Argus to turn the otherwise useless Spectrals into minions that can attack the enemy hero (or at least ones you can easily destroy by throwing them against Gothik’s stronger minions).

His Hero Power draws a card for 2 mana. It’s just like the Warlock’s Hero Power, expect it doesn’t deal 2 damage to the user as well. All this means is that Gothik won’t easily run out of Unrelenting minions to put on his board. Just handle them appropriately, remember that you can probably afford a couple of Spectral minions on your board (2 damage every turn isn’t going to kill you), and this is otherwise a pretty standard fight. Above: The Four Horsemen aren’t as tough as they’d like you to think.

The Four Horsemen only has 7 health, but Baron Rivendare starts with three 1/7 minions on his board. You can’t hurt the enemy Hero until these three cards are either dead or silenced. He also has some Paladin secrets in his deck, including Redemption, which returns a dead minion back to life with 1 health; and Avenge, which randomly gives another one of his minions +3/+2 after you kill one.

You’ll want to deal with those three 1/7 minions as soon as you can. The Paladin has a great card, Equality, that lowers every minion’s health to 1, which makes the job much easier. Of course, you can also just silence them, which instantly makes the enemy Hero vulnerable. Then you can just ignore the weak 1/7 minions and focus all of your attacks on that measly 7 health. The Priest’s Mass Dispel works great here, since it’ll silence all three of them at once.

His Hero Power just gives him 2 cards for a whopping 5 mana, which is actually a pretty terrible value. For once, your enemy’s Hero Power isn’t cheap and overpowered.