Fun fact: When Facebook goes down, much of the Internet industry suffers along with it.

Last Friday, Facebook experienced a partial global blackout for about an hour during the prime news hours of 8 am to 9 am Pacific. The blackout caused a 3 percent drop in overall traffic to news websites, according to data from ChartBeat, a traffic analytics firm that partners with many news outlets (including VentureBeat).

The drop was partially offset by 9 percent of readers going to directly to the homepages of their favorite news sites. 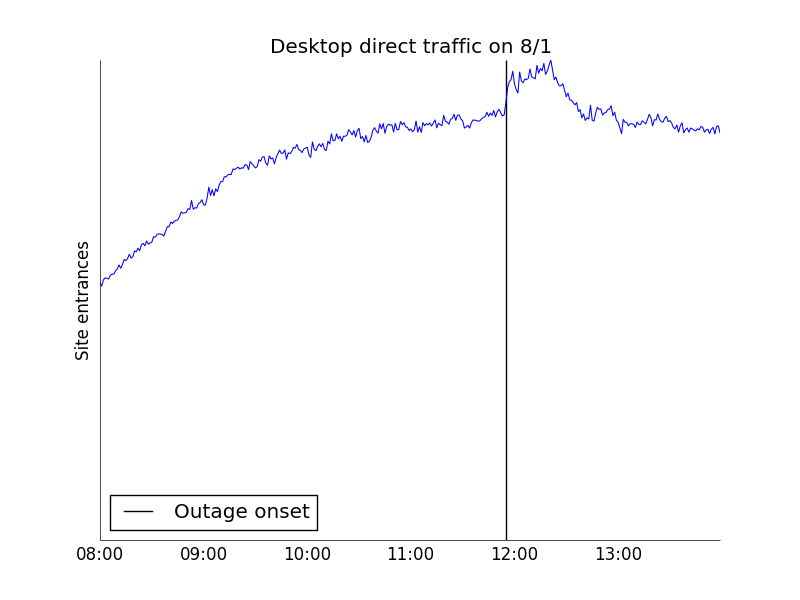 The Facebook experiment is what economists call an “exogenous shock.” Exogenous shocks are fantastic for scientific inquiry because they can’t be re-routed by planning and they’re not biased by highly motivated people. Everyone experiences the same outcome at the same time.

So, it turns out that sharing news on Facebook likely causes more people to read the news. We can imagine millions of people casually checking Facebook and electing to click on a link if it happens to be in their news feed. If there’s no interesting news, they don’t go elsewhere; they just put the phone back in their pocket.

Now, does this mean Facebook matters for democracy? It’s an open question. A experimental field study, aptly titled “Does The Media Matter?” found that giving people newspapers doesn’t really change their opinion or make them much more informed [PDF].

It is possible that the way Facebook could overcome these barriers, if witnessing a story from a friend causes people to pay more attention, especially if that friend has a different political view. But that’s a big “if.”

Either way, Facebook does matter for the news as an industry and that will embolden it to increase the frequency of stories in the news feed.