Google has enough excess billions laying around that they can pay the world’s brightest minds to just think for them. Famed Berkeley economist Hal Varian moonlights as Google’s chief economist and responded to Pew’s recent call on tech experts to predict what happens when robots begin to automate the current crop of existing jobs.

I’m going to post it below, and then give some context, because it’s worth quoting in full. He responded to this question, “Will networked, automated, artificial intelligence (AI) applications and robotic devices have displaced more jobs than they have created by 2025?”

My guess is this ‘job displacement’ has been very welcome, as will the ‘job displacement’ that will occur over the next 10 years. The work week has fallen from 70 hours a week to about 37 hours now, and I expect that it will continue to fall. This is a good thing.

Everyone wants more jobs and less work. Robots of various forms will result in less work, but the conventional work week will decrease, so there will be the same number of jobs (adjusted for demographics, of course). This is what has been going on for the last 300 years so I see no reason that it will stop in the decade.”

There is solid evidence that many low-skilled employees are working less, but the reverse is not true for high-skilled employees. In other words, the low-paid routine jobs just aren’t paying enough, and that’s an incentive for employers to replace people with machines.

Economist Peter Kuhn put together this graph showing how overtime (50 or more hours a week) is increasing for highly paid men and decreasing for lower-paid male workers. 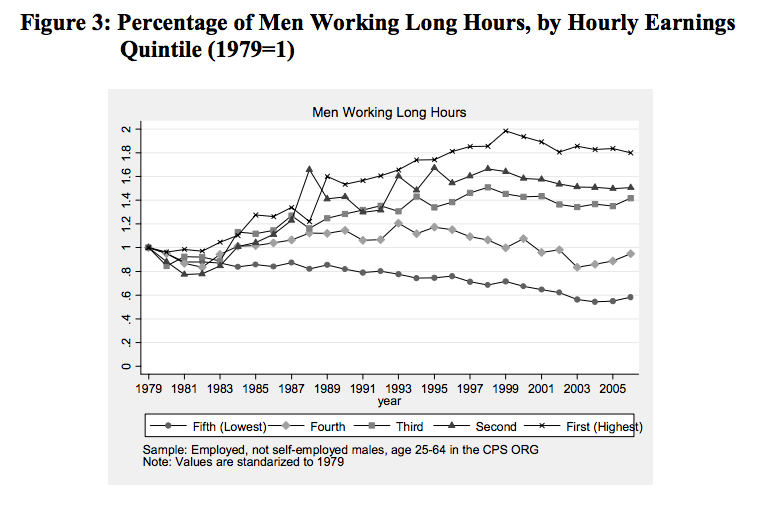 In a recent Twitter rant, investor Marc Andreessen made the case that this future economy will be a paradise:

Though inequality in itself could have major problems. One browser engineer at Mozilla argued, “I predict large societal upheavals as the gap between highly skilled (and highly paid) workers and a high proportion of partially or totally unemployed people continues to widen.”

It’s an open question about whether the robot-job apocalypse will be good or bad. Pew surveyed more than 1,000 experts. You can read the full report here.