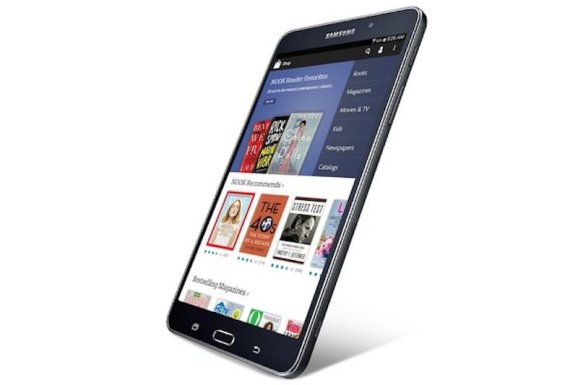 Samsung will be contributing the hardware for a new Barnes & Noble Nook tablet, and it looks like we’ll be getting a first look at the new device later this month.

The two companies have planned an event in New York City on August 20 where they are expected to introduce Samsung’s take on the Nook.

The two companies originally announced plans for a jointly-produced device in early June.

Samsung and Barnes & Noble are expected to call the tablet the Galaxy Tab 4 Nook. The device will have a 7-inch screen and, like previous Nook tablets, will compete closely with Amazon’s Kindle Fire HDX as well as with Google’s Nexus 7. The device will run the Nook’s Android-based operating system and will likely feature some cross promotion with Samsung’s digital marketplaces.

Barnes & Noble first said it wanted to work with a hardware partner last year after telling shareholders that Nook Media (a separate entity jointly owned by Barnes & Noble, Microsoft, and Pearson) sales were in steady decline.

Barnes & Noble first launched its Nook ebook reader back in 2009 when Amazon was getting consumers interested in ebooks. B&N created a series of low-priced tablets as well as a digital media store where customers could buy books, movies, games, and TV shows to play on the devices.

But the Nook failed to impress consumers and took a continual beating from Amazon’s Kindle and media ecosystem.