Grayson Hopper is a fish.

He’s been playing the classic Game Boy role-playing game Pokémon Red for over 125 hours and has thousands of viewers on his Twitch livestream.

Where Twitch Plays Pokémon saw the collective might of the livestreaming network play (and eventually beat) the Nintendo classic, Grayson the fish is doing all the work himself.

When Grayson swims to a different part of his bowl, he triggers a virtual button press through motion tracking, which makes progress in the game slow but possible. For the first five minutes I watched him, Grayson sat in the game’s menus. He’s since made it out, though, and is currently standing in the corner of his bedroom.

According to his owner, Grayson has already acquired his first Pokémon, a Charmander that he named “AAAABBK,” and defeated his first opponent.

Grayson chose to call his character “Ash.” His owner says that he’s “been playing since the very start and selected his own name from one of the preset ones!”

Many of the comments on the Twitch stream are complaining that Grayson’s bowl is way too small. There is no word on whether he will be getting an upgrade, though, and the stream will likely remain visible during daylight hours only. “We don’t have a dedicated light for Grayson at night as he lives in a tiny dorm room and we would rather not sleep with the light on,” explains his owner.

There is a live updater for the project so you can keep track of Grayson’s major progress. Some current highlights:

The Fish Plays Pokémon Twitch channel has a very short FAQ, consisting of just one question: Is the fish dead? “No, the fish is not dead. He just sleeps sometimes,” reads the answer.

Fish Plays Pokémon even has its own official Subreddit to discuss Grayson’s progress. The first piece of fan art is already live on there. 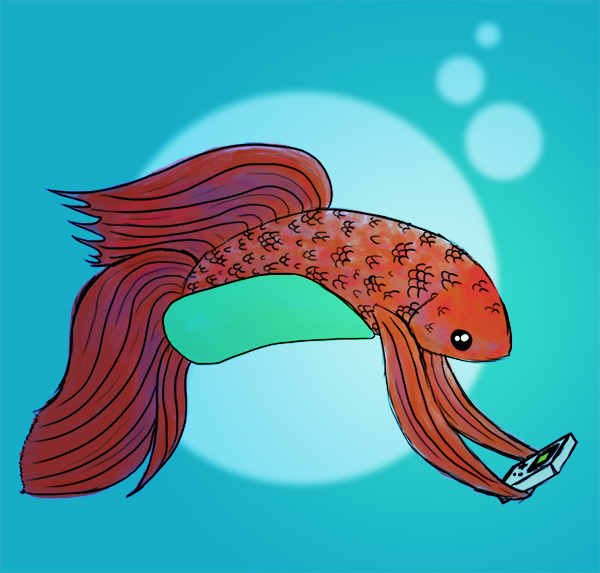 Above: The first fan art for Fish Plays Pokémon.