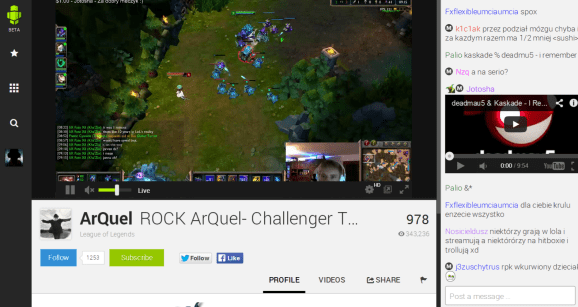 Some people are not really happy with gameplay livestreaming video site Twitch right now, and others are even considering leaving the site altogether.

Twitch announced yesterday that it will start deleting archived broadcast recordings from its site after 14 days (60 days if you’re a partner or paying Turbo subscriber), and it also revealed that will start flagging and muting sections of on-demand videos that contain copyrighted music. Both policies have portions of the Twitch community voicing concerns, but the livestreaming company isn’t backing down.

In response, Cosmo Wright, one of the top broadcasters on Twitch (who specializes in speedrunning Zelda games), says that he is cancelling his subscriptions to streamers on the site. He is also looking into livestreaming alternatives to host his speedrunning videos.

Of course, that leads to the obvious question: Does Twitch really have any competition? It turns out that it does, and we’ve dug up some options that people like Wright and others could end up using.

Shortly after Twitch announced its policy changes yesterday — and the backlash started to flare up among the game-streaming community — Hitbox.tv, Twitch’s most-direct competitor, posted a blog titled “Time to switch.” The company claims that Twitch has lost touch with the “people that made it big,” and it is encouraging people with concerns to give Hitbox a try.

Wright even listed Hitbox.tv as the alternative he was most likley considering, and he could end up having a better experience with it than he did on Twitch.

Livestreaming on Twitch almost always comes with a 20 second to 30 second delay. This means the chat is always seeing something that happened a half minute ago for the person broadcasting. Hitbox claims its delays are in the range of only 2 seconds. The startup also claims it has a better chat system.

Hitbox also promises that it won’t delete archived videos, and it also claims it won’t implement any sort of system to automatically mute copyrighted content.

Hitbox.tv is in beta right now, but it’s open to everybody, and you can use standard broadcasting tools like Open Broadcasting Software or XSplit to livestream gameplay from your PC.

Hitbox also has a revenue-sharing program, and it is accepting applications for people who want to join its team as a partner. This is similar to Twitch — as that company has enabled people like Wright to make a living just from streaming games.

Another Twitch alternative that doesn’t shake up the formula too much is Gaming Live. Like Twitch and Hitbox, the site enables you to stream from PC software like Xsplit and OBS, and it also enables you to start your own channel and follow others.

It’s still in alpha, so some things on Gaming Live still feel a bit wonky (the page breaks a little big when you adjust the size of the window), but it plans to soon introduce a partner program that will enable broadcasters with big audiences to start making money.

Outside of the game-dedicated sites, you have options like Livestream and Ustream. Both of these companies offer the option to stream any kind of content instead of stuff related to the blips and bloops of PC and console gaming.

Both companies, like all of the others, feature partnership programs. Livestream permits anyone to fill out an application for partnership while Ustream has an invitation-only program.

Interestingly, Ustream is the only other site other than Twitch that supports native broadcasting from a console. The PS4 gives gamers the option to stream content on Twitch or on Ustream. The Xbox One, however, only offers Twitch.

If you like making videos, but you put most of the emphasis on video production and not on livestreaming, Pivotshare then may be the option for you. Twitch, Hitbox, Gaming Live, Ustream, and Livestream all enable broadcasters to make money by splitting ad revenue. Pivotshare employs a different strategy. Instead of relying on ads, Pivotshare partners can post videos behind pay walls. People can then only view the content if they pay the entry fee, which the producers have full control over.

This model isn’t proven to work like Twitch’s, but it may present a viable alternative for those making high-quality videos.

Finally, you have the alternative that probably isn’t all that much of an alternative for long. Google is finalizing a $1 billion deal to acquire Twitch. Not only that, but YouTube is well known for its restrictive Content ID bot that zealously identifies copyright material. This still causes problems for a number of video producers on the site.

Of course, if that stuff doesn’t bother you, YouTube does enable you to broadcast live video, and it will save those clips forever.