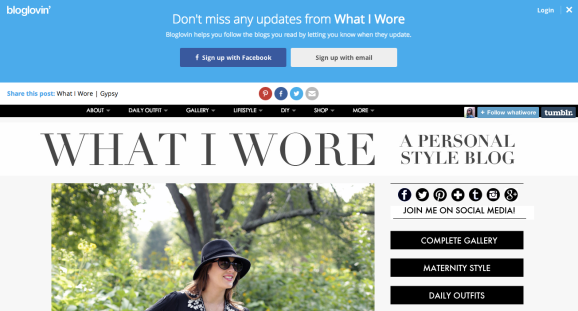 Bloglovin, possibly the only RSS reader to win over the fashion and beauty industry, received some bad news last week: a strict block from Yahoo’s Tumblr that prevents all Bloglovin users from accessing Tumblr blogs via the site.

Bloglovin commands over 25 million users to date — up significantly from 16 million in April — and focuses largely on women’s lifestyle content — also a popular genre among Tumblr’s 198.1 million blogs.

According to a Tumblr spokesperson, Bloglovin’s access was suspended because the startup was “unwilling to remove features designed to siphon traffic from Tumblr blogs, including the wholesale reproduction of blog pages.” Tumblr tells VentureBeat that user complaints “regarding unauthorized display of their content” lead to an investigation.

Key to the issue is Bloglovin’s shift away from being a plain RSS reader. Bloglovin displays full blog posts via an iframe, an HTML tag introduced over a decade ago that prompts Web browsers to render an entire site, theme and all, atop Bloglovin.com.

This, apparently, is a major point of contention for Tumblr. The Yahoo-owned blogging platform, however, continues to support standard RSS readers.

Bloglovin chief executive Joy Marcus tells VentureBeat that “we are having business-level discussions with Tumblr” and “we operate legally as an RSS reader.”

Bloglovin’s access to Tumblr was shut down late last week. Tumblr tells VentureBeat that Bloglovin will remain suspended “until a solution can be reached.”