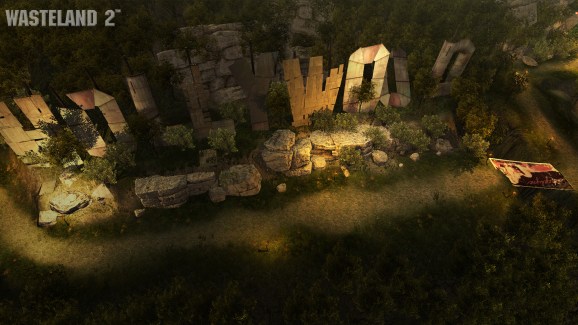 Almost every human is dead in Wasteland 2, but enough tourists still exist to take pictures of this damn sign.

The harsh and unforgiving world of Wasteland 2 has one message for its occupants: This is hell.

You aren’t going to enjoy life in the irradiated Arizona desert, and if you don’t learn from your mistakes, you won’t make it out of there.

Brian Fargo, creator of the original Wasteland and executive producer of the original Fallout, has spent years and millions of Kickstarter and Early Access dollars crafting this 50 hour-plus hardcore gaming experience. This designer of postapocalyptic video games certainly isn’t going to put any tutorials into his complicated game; he offers only death, destruction, and a few help boxes along the way.

This system works wonders. I spent my first few hours learning the hard way about explosives, cover, friendly fire, the many skills, and more. I feel like I came out of this crucible with all of the tools necessary to make it through the increasingly difficult levels as I progressed through the story.

The nuts and bolts of Wasteland 2

In Wasteland 2, players control a squad of Desert Rangers, Wasteland 2’s main protagonists. The squad consists of four core members, which you can create from scratch or select from a group of templates at the beginning of the game: 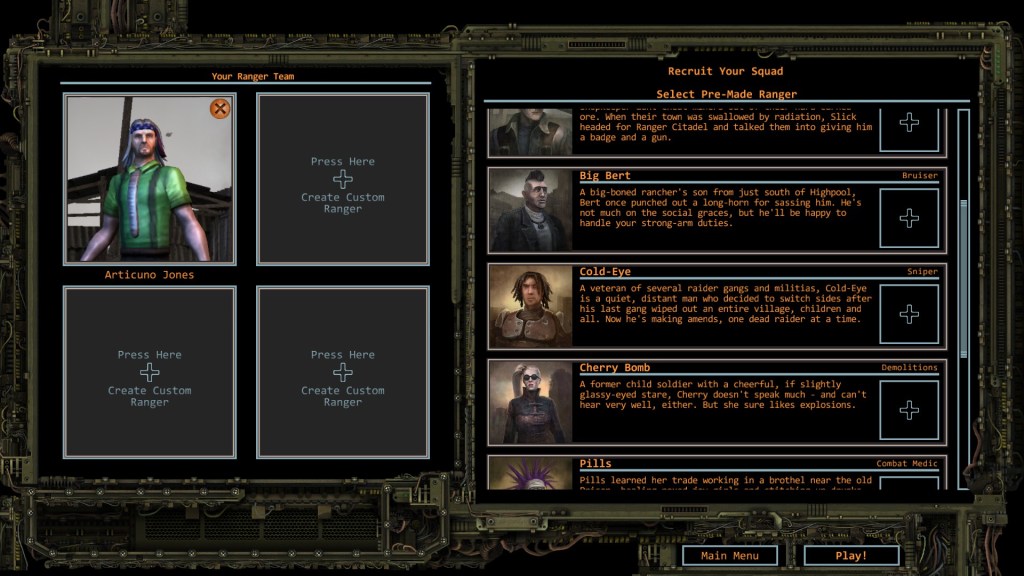 Above: In Wasteland 2, each member of your squad will have to fill several key roles. Choose carefully!

The turn-based combat takes place on a massive grid and is reminiscent of the X-COM and Shadowrun games. Wasteland 2’s interactive environment is of particular importance, as flammable objects like cars and mortars will explode and kill all — be they friend or foe — in their immediate area. Players will no doubt learn this the hard way the first time.

The importance of interaction

The real strength of Wasteland 2 lies in what happens outside of combat. Your exploration and chat decisions are infinitely more important than what takes place in the combat window. These choices can get you killed just as easy as they can save you or prepare you for your next battle.

For example, I hit a roadblock on one of the first levels. My party wiped (all squad members killed or incapacitated, resulting in a game over) the first few times due to my own incompetence. After I had learned the ropes, I still found that my squad didn’t quite have what it takes to win the battle. We had no healing kits left and little ammunition. Two of my party members were trying — and failing — to beat the enemy with sticks.

I loaded up my most recent saved game and decided to take a different route to the fight. I ended up finding a shopkeeper with plenty of supplies. I stocked up and smashed the enemy. Unlike other squad-based strategy games, Wasteland 2 places tremendous importance on roaming around and checking every nook and cranny on a map. It’s much more like a Baldur’s Gate or Icewind Dale game in this respect, and I never would have learned this lesson if I didn’t die repeatedly in a tough battle.

Not all exploration is beneficial

So, I put on my explorer’s hat and began to delve into every corner of the map. I found new allies, and I also found what seemed to be free treasure in some crates. Then, half of my party exploded. That’s not a euphemism for growth or excellence — they blew up. A trap killed them, and I received several of these messages: 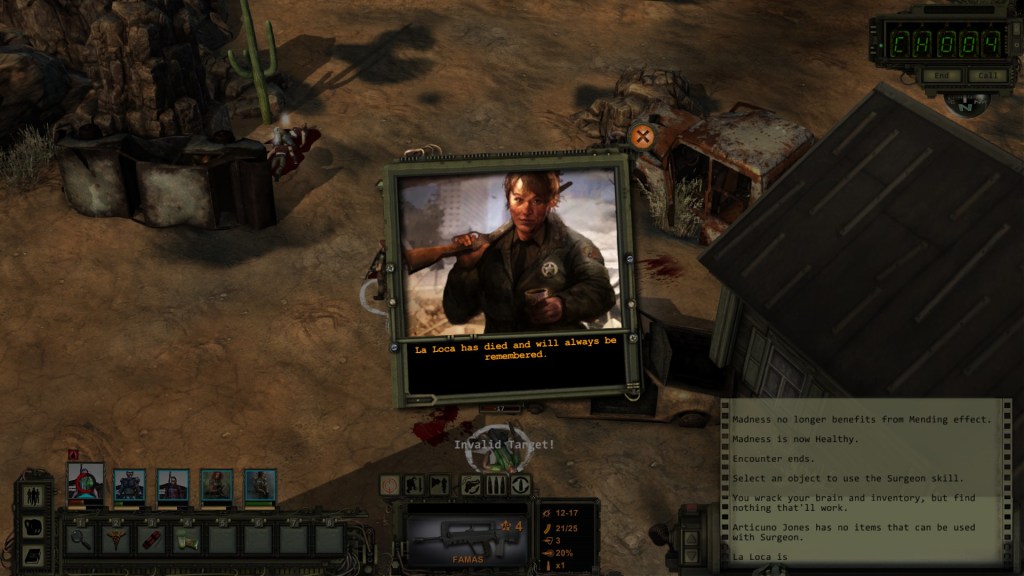 Above: You deserved better, La Loca. How was I supposed to know that some crates explode?!

The first is that my concept of in-game death in Wasteland 2 was way off. Until now, “death” meant losing a battle. If all of my squad members fell to zero health in battle, that was me dying.

The truth is that all characters, whether they are NPCs, core squad members, or new recruits picked up along the way, can permanently die. If any character takes enough damage, they’re gone. You can’t resurrect them or replace them with a fresh-faced recruit, as you can in the X-COM games. They’re dead and gone, and their skills went with them. If your healing character dies, you don’t heal now. This helped me learn the importance of building diverse characters with a wide range of skills.

Chat choices can also result in the true death of others. Players are often forced to choose between saving one town or another. I expected the typical RPG story experience: I would save one town and then magically arrive just in time to save the second.

That’s not how things work in Wasteland 2. Saving one town means dooming the other. You will hear the townspeople’s screams and pleas for help over the radio. You will arrive in time to watch the last few die. Sure, you will avenge them. But the weight of your actions in Wasteland 2 is quite heavy.

My curiosity also led me to pursue every chat angle and press every button in Wasteland 2.

At one point, I found a nuclear device. When it prompted me to arm it, I expected a message that blocked me from doing so like in the Fallout or Star Wars: Knights of the Old Republic games. “Doing this would surely destroy the entire town!” or something like that.

I pressed the button and destroyed the remnants of civilization. I was greeted with a funny message and a credits screen, complete with some sort of car-crab: 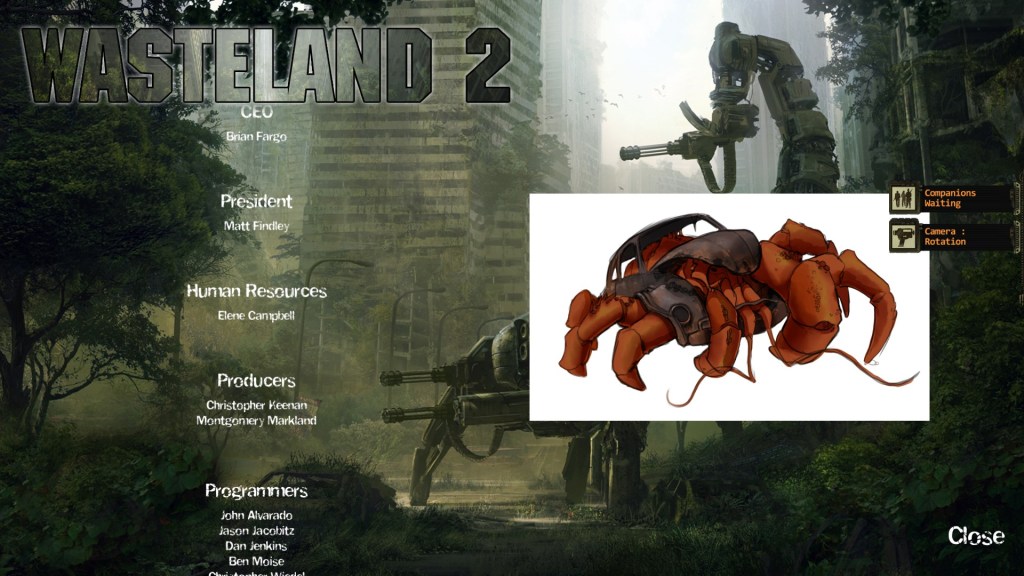 Above: Seriously though. What is that thing? It looks like someone took the Volkswagon Beetle name literally.

The moral of these cautionary tales? Save often and pay close attention to everything in Wasteland 2. Nothing is insignificant in this game. Character progression, chat bubbles and environmental factors can all mean the end of your in-game existence.

Don’t let that deter you, though. Dying is the great educator in Wasteland 2. If you are too careful, you won’t experience some of the title’s greatest features.

Go forth, people. Go forth and die.