SHANGHAI — When I was riding the Maglev train in this city, I couldn’t help but think how far advanced China was compared to the U.S. The train goes up to 268 miles per hour, and it gets you to Pudong airport 18 miles away in just 7 minutes and 20 seconds. It is a wonder of the modern world, and a symbol of how the Chinese business and tech revolution seems like it is leaving us in the dust.

But here and there, in the blink of an eye, I passed by run-down houses with decaying stone walls. The contrast was stark, as there were clearly parts of China that were stuck in the past. It reminded me of what I was there to do: assess the maturity of the Chinese game industry, and make an inevitable comparison to the West’s. I had just four days to absorb it all, as I was there to cover the ChinaJoy Expo, which drew an estimated 250,000 people to a sprawling complex with 100,000 square meters of exhibit space. That event was roughly five times bigger than the Electronic Entertainment Expo (E3) in the U.S.

Clearly, China is one of the hottest markets in the world, with a growing $14 billion PC online game market, a $2.9 billion mobile games market, and a console game industry that is just getting started. Thriving Chinese game companies include internet conglomerates like Tencent; publicly traded companies online game companies like NetEase, Changyou, Shanda, and Perfect World; private game giants like Giant Interactive; and mobile-focused companies like Talkweb/Spellgun, CMGE, iDreamSky, and Yodo1. 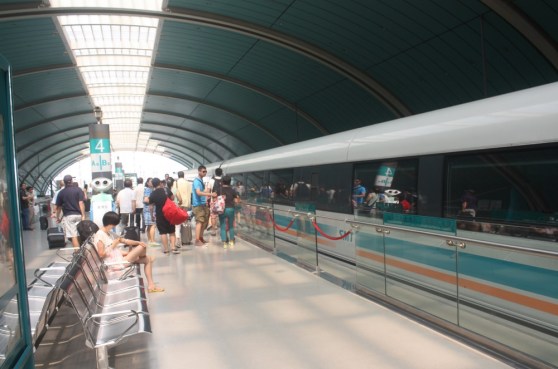 There’s also a growing body of companies known for their game development skills like American McGee’s Spicy Horse Games, Concept Art House (based in San Francisco with offices in Shanghai), and FunPlus. Inside the luxurious Kerry Hotel, I saw a lot of Westerners mingling with Chinese game executives. It seemed like they were all there because they had to be in order to make deals. Everybody recognizes it’s a global gaming business, which is the theme of our upcoming GamesBeat 2014 conference.

Not content to dominate their own market, the Chinese are expanding. They’re acquiring U.S. companies, or investing in them, as evidenced by Alibaba’s investments in game-focused mobile messaging service Tango and mobile game publisher Kabam. Tencent has invested in Epic Games, Riot Games, and Activision. If you look at all of Asia, the trend is clear, as nine of the top ten game acquisitions in 2013 were Asian acquirers of mostly Western game companies. Chinese game companies have been protected by their government, and that has given them an edge in financial might.

“This may be a little controversial, but in the next five to 10 years, you’re going to see a lot of the big Chinese players, the ones with a lot of money, acquiring companies in the West,” said Darren Jobling, chief executive of Eutechnyx, a United Kingdom-based maker of the Auto Club Revolution free-to-play game, in an interview. “It’s a massive opportunity for Western developers who might have not even thought about China. We came out to Chengdu and saw what was going on and thought, ‘We need a slice of this.'”

American leaders like Zynga have stumbled. Activision Blizzard and Electronic Arts are actually smaller in revenues than Tencent’s game division. Lots of Western mobile games companies are in a stampede to publish their titles in the Chinese market. There are signs of a greater openness, especially in Shanghai, according to Shawn Luan, the senior vice general manager at Howell International Trade Fair, the host of ChinaJoy.

And while Microsoft is preparing to launch the Xbox One in China on Sept. 23, it certainly seemed like it will have some very tough competition. Chinese companies are fielding a bunch of Android micro consoles and smart TVs with game capability. Few of these are likely to have AAA games, but they will be much cheaper ways to play games than the consoles. 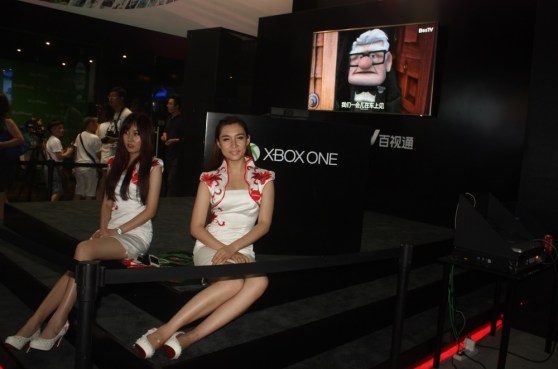 Above: Xbox One at ChinaJoy

And judging from my observations of my dinner hosts, people in China are obsessed with their mobile phones. They use them frequently during meals, play games while they’re waiting, and make calls on more than one smartphone. With home-grown mobile social apps like Tencent’s WeChat, they’re glued to their smartphones, which have faster and faster access thanks to the deployment of new mobile infrastructure. These people might very well skip the next generation of consoles.

It’s no wonder that the mobile game market in China grew 93 percent last year, according to Niko Partners. And mobile game companies like CMGE are going to aggressively try out new intellectual properties on mobile first, since it’s so efficient to try out new ideas and get them into the market fast in mobile.

But does this mean that China is going to take over in games? To add some perspective, we should remember the xenophobic fears about the Japanese taking over in games. Nintendo, Sony, and many other Japanese console game publishers did their best to dominate. But even as they expanded to the U.S., American game companies held their ground, and Microsoft spurred a resurgence of U.S. developers after it launched the Xbox in 2001.

Tencent has wisely seen this truth, and it has bought stakes in companies like Epic, Activision Blizzard, and Riot Games, but it hasn’t bought them outright. If it did so, the creators would have no incentive to stick around, and they would leave the company to start something new.

“We don’t normally want to say, ‘Here’s a big pile of cash, we’re buying you.'” said Bo Wang, vice president of Tencent Games, in an interview. “We want to find a team with talent, with a passion for games, and with a very high standard for gaming experiences. We know what we’re good at. We have financial resources. We’re in a fast-growing market. We have a successful channel to the Asian audience. We have free-to-play experience.”

“Remember, the gaming industry didn’t exist in China 15 years ago,” he said. “The most experienced people here have only 15 years’ experience. Compare that to the U.S., where you could go to a place like Epic and find senior people who are much more experienced than that.”

He noted that Asian developers are good at community, particularly in online games. They’re also good at free-to-play, which has caught fire worldwide. But the Chinese aren’t yet the wealthiest of gamers, and they can be easily outspent on a per capita basis.

Then there is the matter of creativity. Many Chinese games seem like clones.

I would wager that China’s censorship of game content hasn’t helped that creativity blossom in China. Game developers relish their freedom, and I believe many won’t migrate to China for that reason. That also means that a lot of Western games, like Grand Theft Auto V, won’t make it to the Chinese market.

As for the global market, Xiaofeng Zeng, analyst at market researcher Niko Partners, said in an interview that he isn’t sure how the Chinese will do in competition against Western gaming companies. The West is known for its creativity in mechanics while China, as represented by giants such as Tencent, is known for its financial power. But financial power isn’t everything, as successful indie developers are proving. And few Chinese games have large audiences outside of China, he said.

“The Chinese market will become more open in the future,” Luan said. “That’s a trend no one can stop.”

The idea of any one region taking over the game business is ridiculous. Look at the blossoming game industries — full of startups, studios, and marketing companies — in places like Montreal, Helsinki, Los Angeles, Seattle, San Francisco, Amsterdam, Vancouver, Berlin, and many other places. The list goes on.

It’s going to be a worldwide business. But I’ll say this. China isn’t done grabbing its share of the world market.