Yesterday, we ran down some of the old games that made retro developers want to smash things and hang up their controllers altogether. Well, the past is a big place full of difficult, vague, or just completely cheap games, so one article wasn’t enough to hold all the pain.

So here are some more developers to get their frustrations out in the open for your enjoyment. Because that is when the healing begins.

Loot Hero is a game about running back and forth and mowing down enemies in order to gain experience and buy bigger weapons so that you can run back and forth even faster and mow down bigger and more powerful enemies. And then eventually, you run all of the way to the end and bounce your lance off of a dragon until it, too, dies, and then you win.

And then you play through all the same levels again with your improved stats. It’s not as boring as it sounds. 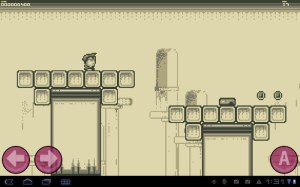 Above: I can still remember how much fun I thought I had with other games that looked just like this. I probably didn’t, though.

I have tried out a few retro-styled game apps and a couple that frustrated me were Brave Frontier and Stardash (both are kind of action role-playing games with story-driven gameplay). Brave Frontier is [the] kind of combat gameplay with an amusing story, but [it’s] nothing that will challenge the strategic portions of most players’ brains.

Stardash is old-school arcade fun; it even has graphics like Nintendo’s original Game Boy handheld system. But this nostalgia turns bad quickly, and a single mistake means starting the level over. Even worse, the game also does not support orientation flipping at all. I can’t really recommend it to people who get frustrated easily.

Time Ducks is about a bunch of animals trying to get across a road without falling under the life-crushing wheels of traffic. They have a little help in the form of their inexplicable ability to manipulate time, which is especially cool once you see that the game renders the temporal jiggery to look like it’s rewinding like a VHS tape.

It’s more or less a game for people who remember what “Tracking” was and how it could ruin their day and also thought Frogger could have used some help other than the player’s own unreliable reflexes.

I played a lot of games back in the days — mostly on the Commodore 64 and then Amiga 500. Some console games, and sometimes arcade games. I have a lot of fond memories, but to me games were simply supposed to be hard back then and repeatedly dying and failing did not give me much grief.

I do have memories of punching myself in the face or throwing the joystick into the wall from time to time, but no particular game comes to mind that did this for me repeatedly. The way I played games was that I had no expectations per se to complete any game, simply because games were so hard that it was not the norm to complete them. That I did complete a lot of games was part persistence, part having a lot of spare time being a kid, and mainly the fact that I would jump back and forth between several games. 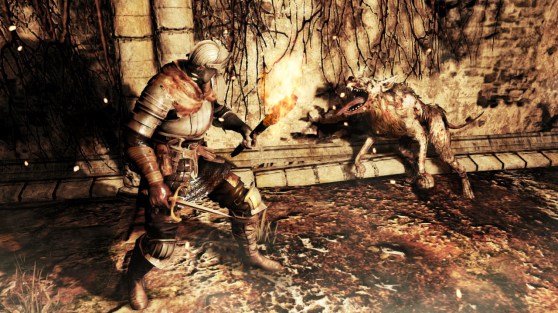 The big difference in difficulty between back then and now, for me, was the fact that games were made to be completed in one sitting. There were no save games, and the countless hours you put into a game were mainly spent on repetition until you had the game perfected. In the end it did not take more than 30 minutes perhaps to complete a full game. That’s very different from now and I kind of prefer the old ways.

Take a modern masterpiece such as Dark Souls. Difficulty-wise it bears a lot of resemblance to the old games, but there is still much more time to reflect, to enjoy the scenery, and to play a very large amount of areas with different themes and monsters but largely the same gameplay. What happens then, for me, is that I get a sense of doing “the grind,” even though I enjoy the game a lot. 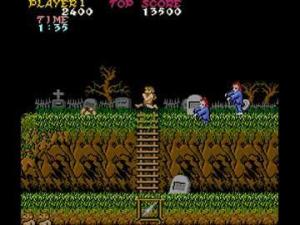 Above: I want to swear just looking at this.

That’s not at all how it felt when I was playing Ghosts ‘n Goblins (C64) or Gods (Amiga 500). Maybe it’s because I was younger, but in those games, every second mattered, every move counted, and I had little idea about (and paid little attention to) how close to the end I was. When I completed Ghosts ‘n Goblins by killing the final boss, I did not know that it was the endgame. All I knew was that my character was moving toward a pixelated female character. On screen the text said, “Congratulations — You have saved the princess,” and I was like “Oh, so that was my task,” but it made perfect sense and was a perfect conclusion.

I would say that games that would case me grief would do so because I thought they were very badly implemented or highly unfair, and then I would stop playing them instead of getting too worked up about it. All the great, fantastic games did not bother me even if I died every 30 seconds, because that was all part of the enjoyment.

Majestic Nights is due out next month. It’s an episodic role-playing game that takes place in a crazy, alternate version of the ’80s. And it has all the big hair, isometric gameplay, and neon that suggests. Players will investigate conspiracies, fight Nazi aliens, and why are you still reading this instead of pre-ordering? 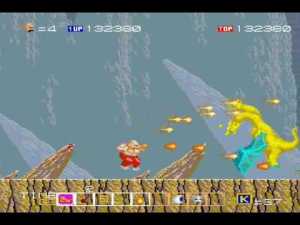 Above: Shockingly, the middle-aged, heavyset man was not terribly light on his feet.

I played a game a million years ago in a local corner shop called Karnov. It was a pretty standard platformer, sort of like Ghosts ‘n Goblins (which is another story, how hard that game was) but was even harder somehow.

You could only take one hit, and the levels were packed with fast, oddly moving bad guys who also tended to spam out heaps of hard-to-avoid projectiles. Karnov, the titular hero, was really bulky and not super maneuverable — his jumping ability was pretty crap, for one, so avoiding everything was nearly impossible.

I kinda prided myself on my arcade-gaming skills (I finished Shinobi in one life, for example — still a high-water mark), but I never got past the first freaking level of Karnov. Just stupidly hard. Thing is, it had some cool power-ups that seemed like they’d really be a lot of fun if you could get them, but no. In hindsight, I think they only ever made the one level.

Jesus, that game was hard.

Speedy Pups is an upcoming mobile title that’s about seven adorable doggies doing their best Sonic the Hedgehog impression as they endlessly run, jump, and spin their way through six themed levels. And instead of rings, they grab bones because puppies have no need for bling. 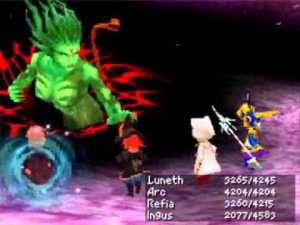 Above: What? Seems doable.

I was never able to beat the final boss of Final Fantasy III on the DS. In retrospect, it was probably some of the cruelest design I’ve ever seen: a two-hour slog through a really long dungeon with no save points, a fight against all four subbosses from earlier in the game, and then a final encounter that’s exponentially harder than anything you’ve ever seen before.

I gave it a good half-dozen or so tries (and I even switched my party to all ninjas/sages spamming shurikens). That’s 10 hours of my life that I’ll never get back. Damn you, Cloud of Darkness.