As I’ve noted before, it’s like the difference between law enforcement and pranksterism, where both have the object of protecting freedom. But this time, there was a big dividing line. At Black Hat, you could expect more people to consider National Security Agency leaker Edward Snowden to be a traitor, while at Defcon, you could see more

“I think he broke the law, but I don’t think he is a traitor,” said Phil Zimmerman, founder of Silent Circle, a secure phone call technology startup, and the creator of the Pretty Good Privacy encryption program from the 1990s.

Defcon (named after the old code for nuclear war, or defense condition) is now in its 22nd year. It was started in 1993 by Jeff Moss, a hacker also known as Dark Tangent. Defcon began as a party for a visiting Canadian hacker. Now it has become the big hacker event of the year for perhaps 15,000 attendees. The Defcon conference at the Rio hotel celebrates alternative culture. It is more tolerant of alternative views. Guards are dubbed “goons,” attendees are “humans,” and the press and speakers are dubbed “inhuman.”

There are always more dramatic moments at Defcon, like when McAfee Associates antivirus software founder John McAfee showed up to deliver a surprise talk about a perhaps paranoid distrust of government and privacy invaders. McAfee was surrounded by bodyguards, but he happily signed autographs and took pictures with like-minded Defcon attendees.

Black Hat, on the other hand, spun out of Defcon about 18 years ago and draws around 8,000 attendees to the high-end Mandalay Bay hotel. You can pay corporate rates at Black Hat, but at Defcon, they don’t accept credit cards, since hackers do not want to be identified. Moss said he never wanted to be put in the position of handing over attendee information in response to a subpoena. There are no names on the Defcon badges, and you can’t take pictures there without permission.

Here’s our photo gallery that shows the contrast between the events. 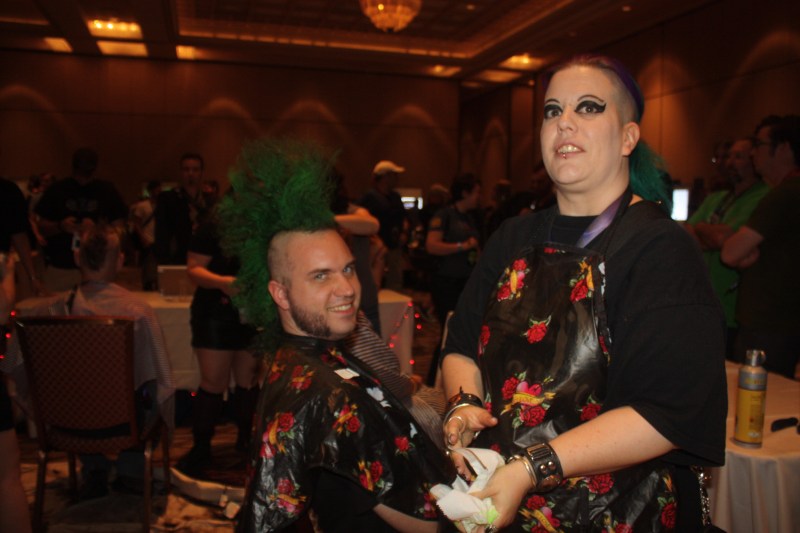 Above: Getting a Mohawk haircut is a tradition at Defcon