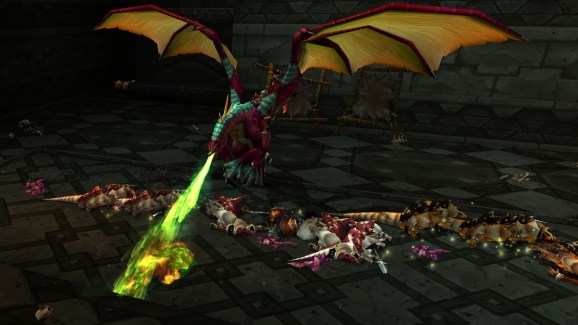 The Upper Blackrock Spire dungeon is just one of the things dramatically changing in World of Warcraft for the new Warlords of Draenor expansion pack.

On your mark, World of Warcraft players. Get set. Quest and kill!

On Aug. 14, when Blizzard Entertainment announces the release date for the new Warlords of Draenor expansion pack, the scramble will begin.

Each new expansion brings with it new content but also erases some of the old, making it impossible for players of the popular massively multiplayer online game to get certain achievements or items after the magic date passes.

Blizzard will hand out keys to the beta test at the announcement on Aug. 14. It will likely be at least a few weeks from that date until patch 6.0.2 launches.

After that, it’s likely to be at least another few weeks before the expansion pack goes on sale — so you have a good but not unlimited amount of time to clean up Mists of Pandaria content.

We’ve compiled your to-do list: everything that you should tackle now in the current Mists of Pandaria expansion pack before those dates hit. Read on to find out what’s going away, what’s coming in, and what you need to get done ASAP. 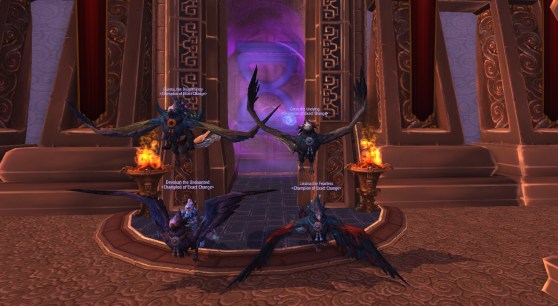 Above: Members of the Exact Change guild show off … the four colors of the Pandaren Phoenix flying mount.

Last chance to face the challenge

Right now, players can take five-person groups through dungeons in challenge modes. These scale down players’ armor to a lower level, ramp up the dungeon difficulty, and add timers to achieve gold, silver, and bronze ratings.

Mists of Pandaria challenge modes are going away with patch 6.0.2, so anyone who wants the armor sets or mounts needs to do them now. There will be new challenge modes at level 100 in the Warlords expansion, with new rewards.

One bonus: If you have earned a phoenix during your challenge mode runs, you do not need to complete them with other characters to earn the other colors. After 6.0.2, any character on your account can fly using any of the four phoenix mounts.

The armor sets will continue to be available only to the character with which you earned the gold ratings, however. If you misplace any pieces, you’ll be able to repurchase them. 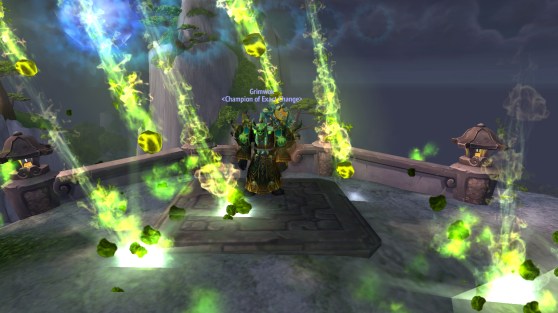 Above: Believe it or not, green fire was on the wish list of warlock characters for almost a decade. Get it now, and your character will earn a minty fresh title for Warlords.

It’s not easy being green (before Warlords)

Warlocks who have not completed the difficult quest chain to get a green color for their fire spells might want to finish that up now.

Players can’t get the title and Feat of Strength after patch 6.0.2 hits, but warlocks will still be able to get green fire. The quest starts from the Sealed Tome of the Epic Legion, a book only visible to warlocks, dropped by elite-difficulty creatures on the Isle of Thunder.