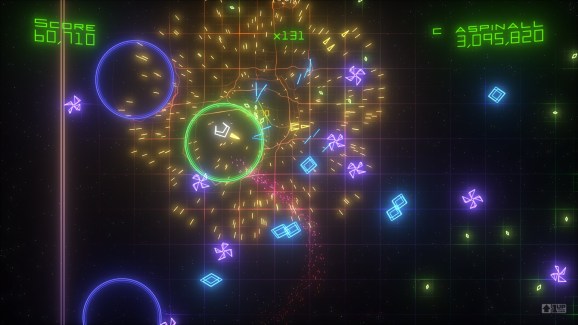 Check out our history of the King’s Quest series.

Our long global nightmare is over. A resurgent Sierra Games just announced what is certainly the game of the year: Geometry Wars 3.

Sierra and Activision revealed new plans for the beloved label today, which include launching a new King’s Quest adventure game as well as a new entry in the Geometry Wars dual-stick shooter series. While the company retains the Sierra name and is publishing King’s Quest, the Activision subsidiary will not focus only on rereleasing Sierra classics. The plan is to have it do that while also forging deals with “edgy” independent developers working on innovative new projects. This should bring some further diversification to a portfolio of software that includes Call of Duty, Skylanders, and World of Warcraft.

“Sierra’s goal is to find and work with talented indie developers working on their own amazing projects, or passionate about working on great Sierra IP, and leverage our expertise to aid them in bring these fun and exciting experiences to gamers with the level of visibility and awareness they deserve,” Sierra director of external development Bob Loya said. “In addition to Lucid Games and The Odd Gentlemen, we’re in talks with a large number of other indie devs, and can’t wait to share more details with fans in the near future.”

The Misadventures of PB Winterbottom developer The Odd Gentlemen are producing the new King’s Quest game. It is a fully “reimagined” take on the original series, according to Activision. The publisher promises that The Odd Gentlemen comprises a number of fans of the King’s Quest franchise. The studio intends to capture the same combination of difficult puzzles and engaging narrative as the originals. The adventure title is due out in 2015 for unspecified platforms — although the company notes it will release its software on Xbox Live, PlayStation Network, and Steam.

While we wait for King’s Quest, we can all shoot some shapes in Geometry Wars 3: Dimensions. Studio Lucid Games, which has produced a small number of mobile games, is taking on the latest entry in the popular shooter franchise. Dimensions will feature a single-player campaign with 50 different challenges in addition to 10 different battle modes. The game is due out this holiday, but Sierra once again didn’t mention any release platforms by name — but it did say the series is coming to “more platforms than ever before.”