All right, now it’s time to continue our look at King’s Quest as the series begins to adapt, evolve, and eventually die. Typing goes in favor of pointing and clicking, the graphics become more colorful and vibrant, and … Mask of Eternity happened. The second half of King’s Quest’s run definitely had its highs and lows. 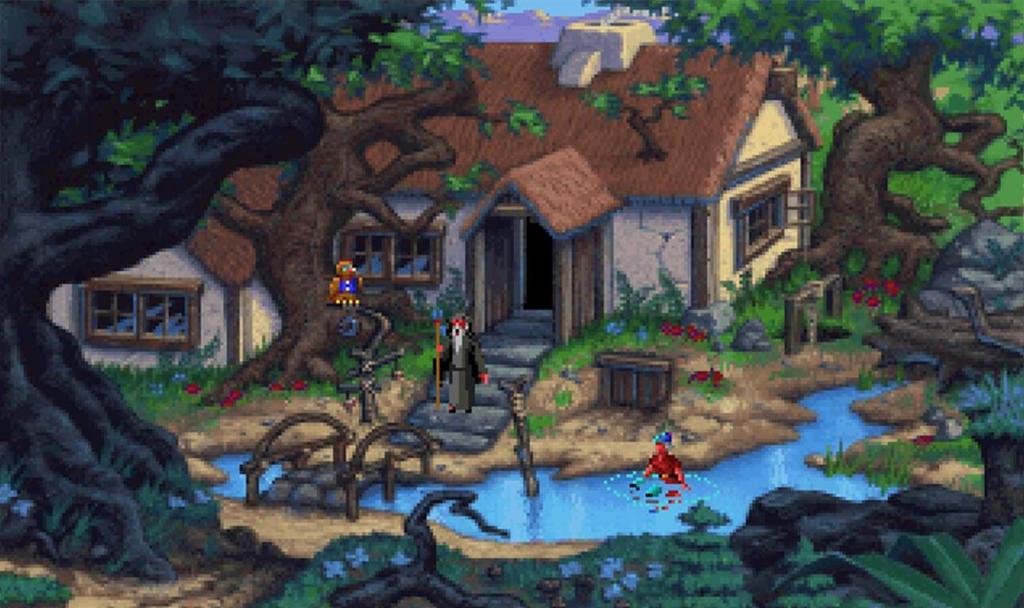 Above: And they’re the three best friends that anyone could have.

Mordack, the brother of the evil wizard Manannan, who Graham’s son turned into a cat in King’s Quest III, takes revenge by enveloping Castle Daventry in a whirlwind and lifting it into the sky. Luckily, Graham was out when this happened, so it’s up to him (and a talking owl named Cedric) to save his family.

King’s Quest V marks the return of Graham as protagonist after a two-game absence, but it’s also the first title in the series to use a point-and-click interface instead of the traditional type-based one.

Did you know?: Poor Cedric wasn’t very popular with fans, largely because he wasn’t really much help and constantly needed saving. Even Sierra would constantly poke fun of the talking owl in future games, notably with a mini-game in Space Quest IV called Ms. Astro Chicken, which gives you points for running into him. 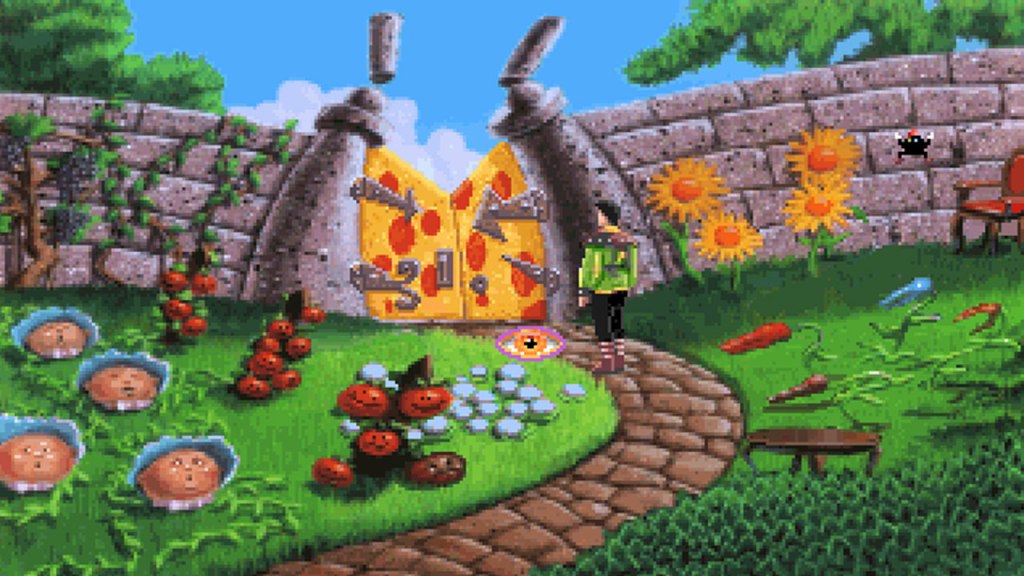 Above: Yeah, parts of King’s Quest VI were really trippy.

Prince Alexander (formerly known as Gwydion, the son of Graham and hero of King’s Quest III) has fallen in love with Princess Cassima, a girl who was with him when Graham saved the day at the end of King’s Quest V. He sails to the Land of the Green Isles to find her but discovers that an evil vizier named Abdul Alhazred plans to force Cassima to marry him. Of course, Alexander decides to save her.

A year after its 1992 release on DOS, Sierra released a CD-ROM version that featured voice acting and higher-resolution art. This made King’s Quest VI one of the first CD-ROM games on PC. It’s also regarded by many as the best in the series thanks to its open gameplay, multiple endings, clever puzzles, colorful locations, and impressive animation.

Did you know?: Speaking of animation, Sierra used a form of motion-capture technology to make character actions look as life-like as possible. 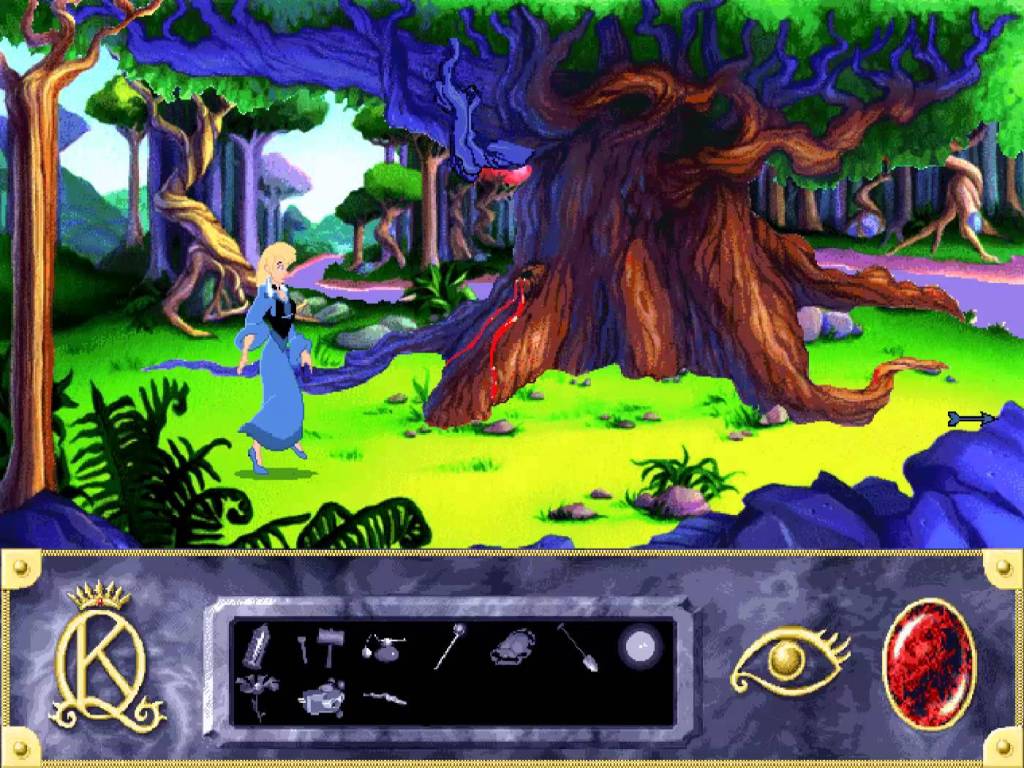 Above: Is this King’s Quest or Sleeping Beauty?

Queen Valanice and Princess Rosella are having a conversation about the importance of marriage when a magical vortex sends them to the land of Eldritch. Don’t you hate it when that happens? Separated, the two try to reunite while saving the land from evil sorceress Malicia.

King’s Quest VII is the only game in the series to have more than one playable character and to feature Queen Valanice, wife of King Graham, in a protagonist role. It also featured a simplified point-and-click interface where your cursor would highlight over objects you could interact with. However, the art style was the most striking difference from past entries in the series. The game used cartoony graphics that looked Disney-esque.

Did you know?: King’s Quest VII is the only title in the series to not show or even mention King Graham. 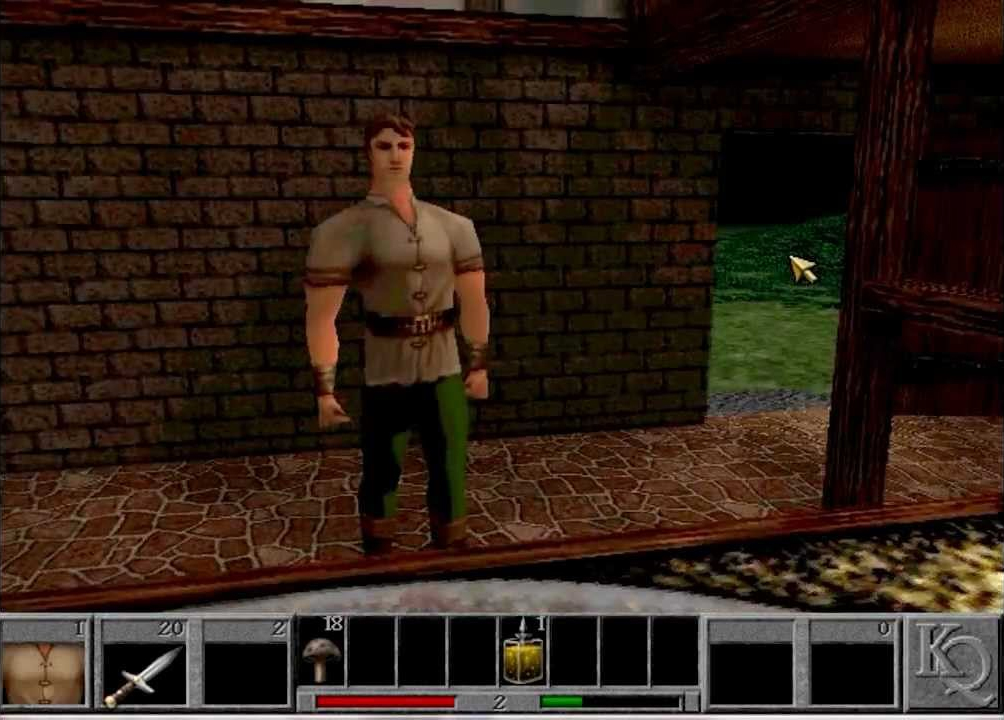 A jerk named Lucreto destroys some ambiguously powerful relic called Mask of Eternity, which of course causes all sorts of bad things to happen in Daventry. Luckily, King Graham’s magic mirror shows him the peasant Conner, who just happened to have a piece of the mask land right by him. Everyone else in the kingdom, including the royal family, gets turned to stone, so it’s up to Conner to restore the Mask of Eternity and save the day.

Mask of Eternity was a departure from King’s Quest tradition in many ways. It featured 3D, polygon-based graphics and, while it still had puzzles, put a large gameplay focus on combat. Even the title was notably different, with the series no longer numbered and the subtitle completely lacking in puns.

This was at a time when the traditional adventure game genre was thought dead by many (this is the same year that LucasArts released the critically acclaimed but commercial flop Grim Fandango), so its understandable that King’s Quest would try to find a way to evolve. However, fans did not welcome the changes to the series formula, and Mask of Eternity remains the red-headed stepchild of the series.

Did you know?: This is the only title in the franchise to not feature a member of King Graham’s family as a playable character.