The world of Bloodborne is rich in menace. It’s heard from the wails of a woman in the distance to the screeching sound of a blade being dragged on pavement … a blade that happens to have your name on it.

Hands-on time yesterday Bloodborne (the same version as folks are playing at Gamescom, Europe’s largest game show) promptly affirms developer From Software’s latest action-role-playing game as the unofficial follow-up to the Dark Souls series. You see this in the user interface, the combat controls, and the amusing dependency of dodge rolls. It’s even more familiar if you’ve been playing this year’s Dark Souls II and its trilogy of DLC. Retaining the muscle memory of those recent adventures made jumping into Bloodborne comfortable even though comfort isn’t something you associate with these punishing games by From Software. 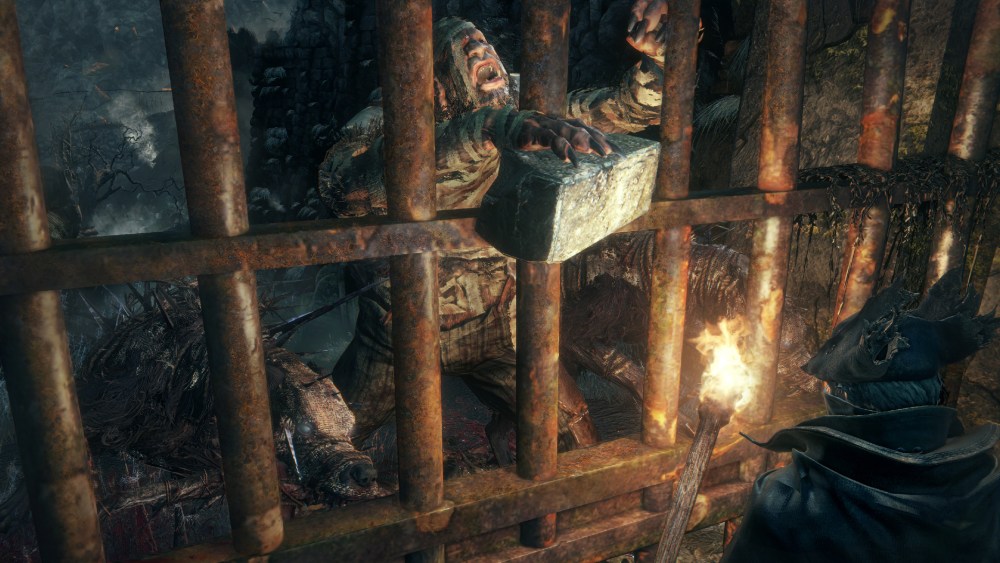 Above: This guy behind bars wants to have a word with you.

Seeing the firearms in the initial reveal gave the impression Bloodborne would be a completely different kind of game than Dark Souls, where your ranged weapons consist of bows, knifes, and magic. Upon closer inspection, these firearms perform like 19th century versions of mage spells. Bloodborne’s true potential in standing out relies on a number of new combat strategies. Counter Shot rewards the risk-takers who can pull off a shot the split second before a foe lands a hit. The downed opponent is now open to an even more powerful blow. Backstrike applies a similar one-two attack, though this move relies on your ability to sneak up on your targets from behind.

This sampling of Bloodborne’s overall level design hints at a return to the appealing multipath layout of the first Dark Souls, an element that some sorely missed in the sequel. A gate locked on one side implies a future shortcut, provided you manage to open that barrier. One path can lead you down a route of a couple manageable hostiles while another could pit you against a monster equipped with torches. Based on my two playthroughs, From Software makes no assurances that the wide reach of an ax attack or the potency of a Molotov cocktail will have the same effectiveness one would find in other action-RPGs. 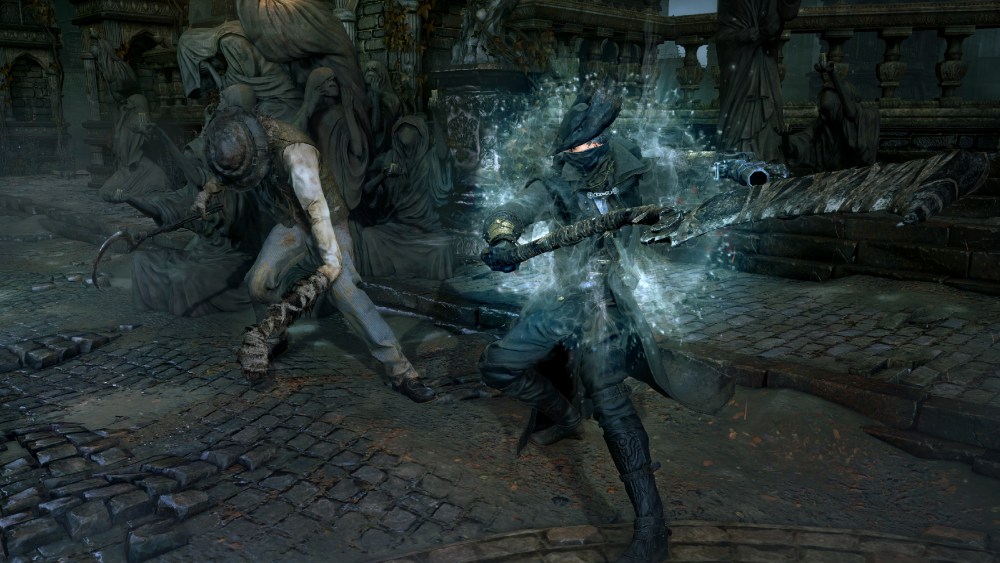 Above: Looks like some undead’s about to eat some ax, not brains.

In typical Dark Souls fashion, exploitable situations are few to nonexistent. Shotguns in many games work unrealistically, enabling for long-range kills. From Software insured that the blunderbuss (a precursor to the shotgun) is 100 percent useless from a distance; it won’t even affect a fraction of an enemy’s health at a distance.

While the challenges from this preview are plentiful, the present difficulty is not necessarily indicative of the final version. If anything, this demo was made slightly easier to move the long lines along at the trade fair. Still, it’s both heartbreaking and fitting that any death ends the demo.

This boss is the tentatively named “Cleric Beast,” a large monstrosity that appears to have vegetation as its fur. I couldn’t help but recall those tech demos of Sulley’s fur in Monsters, Inc. In both behavior and looks, this creature would not feel out of place in a Souls game, and the same can be said for half of the demo’s bestiary. Fighting sickened humans in battered trenchcoats and vests while also fending off spider dogs fits right into a From Software game. 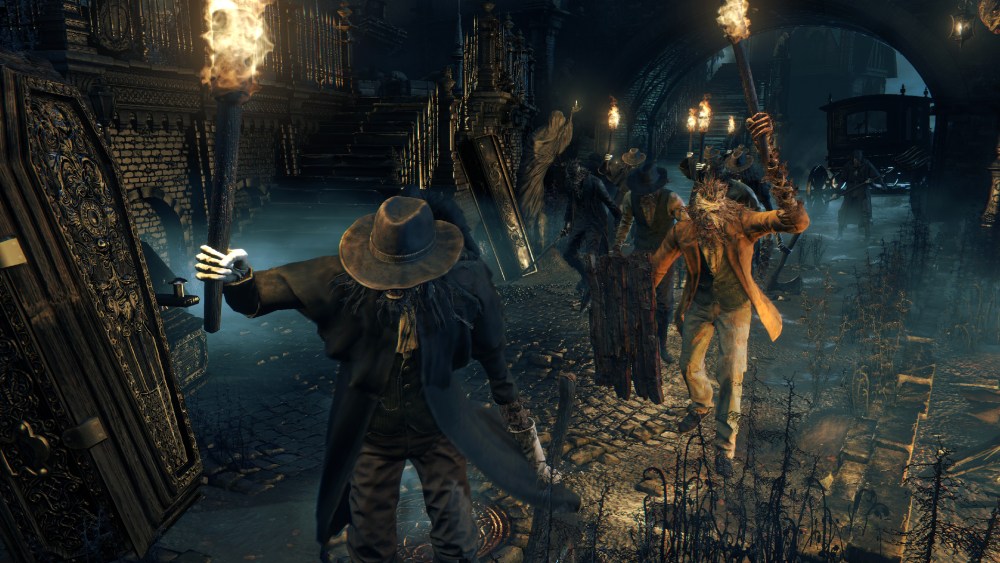 Between this year’s Thief and the upcoming The Order: 1886 (another Sony-published title), gaming has had recent interest in Victorian era-inspired art direction. Bloodborne’s city of Yharnam greets you with gothic spires of all sizes, abandoned carriages, large scatterings of wood, and an abundance of brick structures and cobblestones. The detailed degree of ruin instantly conveys a sense of history in the city. Imagining what Yharnam looked like during prosperous times only makes the misery of the current conditions all the more poignant.  The uneven roads collect countless small puddles of water, the same kind of soaked surfaces that made Seattle in Infamous: Second Son so impressive and more importantly, believable.

Unsurprisingly, Sony was evasive about the backstory behind the city’s current calamity, only that everyone — save for the nameless protagonist — is gravely ill. The citizenry had just enough energy and hate to chase me down with the same survival-horror suspense that I experienced in the Souls series. The clues might lie in the enemies themselves, as a number of them proclaim that the playable character is to blame for all this. 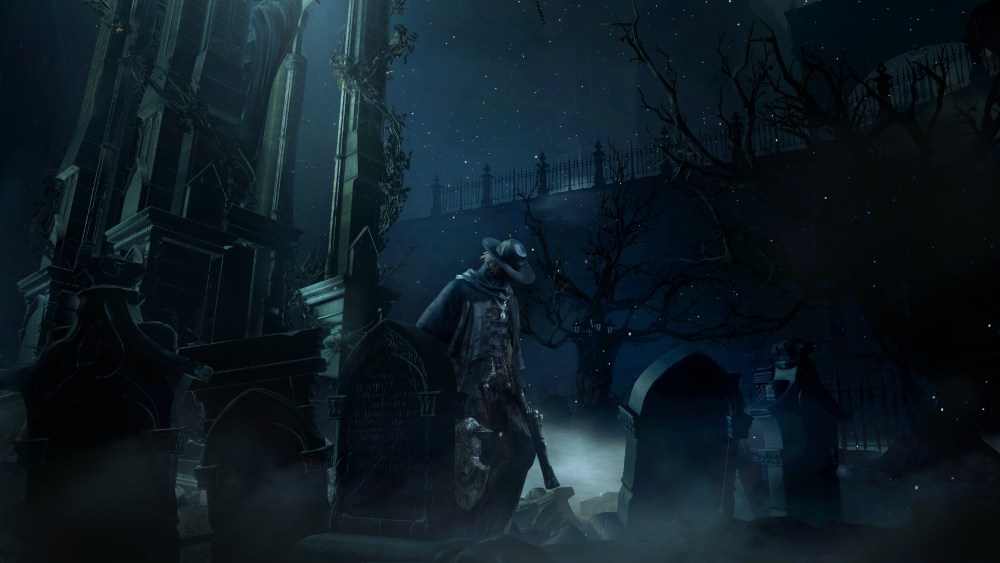