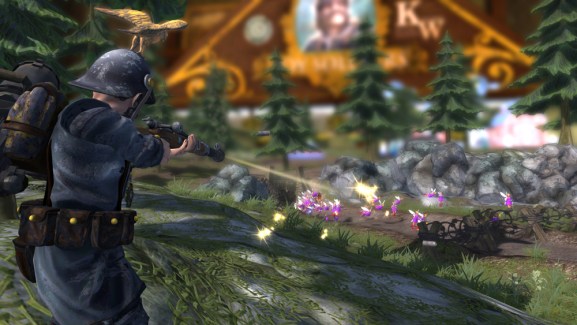 Control each armies' hero to take matters into your own hands.

Whoever said war never changes never faced the destructive might of the Star Power army.

Its forces pranced forth with perpetual smiles, lobbing glittering attacks on my entrenched, battle-hardened soldiers. I’ll admit that at first I felt sorry for them. My machine guns tore through their cheerful front lines and precision artillery shells sent handfuls of colorful teddy bears sailing limply into the air.

Then the cats came.

The bulbous pink monstrosities rolled unfazed through my defenses, the tip of the spear for Starbright’s armored rainbow ponies to trot majestically into my base, her floating cloud castles raining down death on the remnants of my once impenetrable bulwark.

This is Toy Soldiers: War Chest; the latest installment in Signal Studios tower defense-action hybrid series, marching toward an early 2015 release on Xbox One, PC, and for the first time, PlayStation 4.

War Chest is still very much the packaged product of the Toy Soldiers franchise. You defend against waves of enemies with placed turrets in designated positions, negotiating the rock-paper-scissors balance system that requires thoughtful strategy: infantry guns to mow down the vanguard; antiarmor turrets for support; artillery cannons at range; and antiair emplacements to clear the skies.

But for the first time in the series, Signal has introduced multiple armies into the mix, each fleshed out with their own themed hero, turrets, boss units, and powers. Each is fully customizable with unlockable powers and abilities as you level them up in their separate campaigns, and each comes with its own unique dioramas complete with destructible environmental elements — bridges can be obliterated to cut off a path of approach. 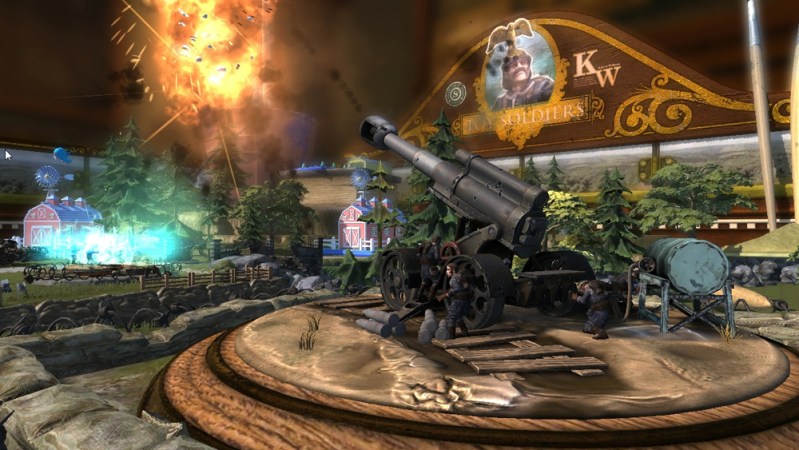 Above: Here's Kaiser's artillery cannon doing what it does best.

Kaiser Wilhelm, the first World War-era ruler of Germany and poster soldier of the series, leads his assortment of traditional military might in a European countryside setting. His counterpart, Starbright, heads the Star Power army, a fanciful collection of whimsical units that are no less formidable, defending a makeshift backyard setting. Two additional factions that Signal has yet to announce will also enter the fray for a total of four controllable armies.

The twist of Toy Soldiers — the capability to hop into these turrets and gun down the opposition — is a focus in War Chest, with a greater emphasis on earning action points for piloting the machines of war.

Those collected points also summon new faction-themed powers and units: You can spend a small amount to bring in your hero for third-person combat with multiple weapons and grenades. Alternatively, you can save up for a devastating boss unit, like Kaiser’s A7V tank or Starbright’s airborne pegasus, which spits bubbly death from the sky. As a last resort, you can bathe the enemy with a map-clearing zeppelin airstrike or a shower of lethal stars

While Signal Studios isn’t ready to talk about additional game modes just yet, Toy Soldiers: War Chest will incorporate a multiplayer mode that pits player armies against one another. It has teased more, though Signal and new publishing partner Ubisoft are keeping the rest of the surprises to themselves. But if the slightly sweet, certainly creepy sight of brightly colored laser-bellied teddy bears marching with maniacal smiles has made the cut, there’s no telling what else is coming out of the toy box.