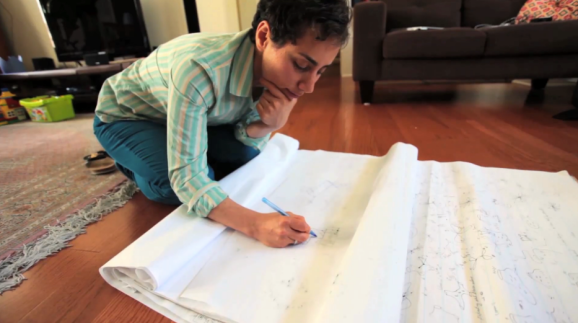 Iranian-born Maryam Mirzakhani of Stanford University has become the first woman to win the top award in mathematics, the Field’s Medal. The award, often described as the Nobel Prize of mathematics, is given every four years to up to four scholars and has been around since 1936. Mirzakhani was awarded the prize for her work in complex geometry and navigation within spaces.

Mirzakhani said she isn’t taking any interviews after the announcement. But in a wide-ranging conversation with Quanta Magazine prior to the announcement, she described her brainstorming techniques.

Oddly enough, Mirzakhani says she has a slow mind and lets problems marinate for super-long periods of time. As described by Quantz:

Mirzakhani likes to describe herself as slow. Unlike some mathematicians who solve problems with quicksilver brilliance, she gravitates toward deep problems that she can chew on for years. “Months or years later, you see very different aspects” of a problem, she said. There are problems she has been thinking about for more than a decade. “And still there’s not much I can do about them,” she said.

This kind of slow-bake process jibes with research on how the famous “Eureka” moment of brilliant inventors comes to pass. Inventors can toil for years on a single solution, while the brainstorming itself can happen in the background of consciousness.

Famed psychologist Mihaly Csikszentmihalyi notes that “Cognitive accounts of what happens during incubation assume that some kind of information processing keeps going on even when we are not aware of it, even while we are asleep.”

Mirzakhani draws out her ideas in large sheets (pictured above). “The process of drawing something helps you somehow to stay connected,” she explained. “You don’t want to write down all the details.”

Indeed, research increasingly finds that doodling is good for thinking, especially in memory retention. “Doodling is really to make spontaneous marks to help yourself think,” said Sunni Brown, in her “Doodlers, unite!” TED talk on the power of causal drawing.

Mirzakhani aims to get back to her research, but hopes that her award will encourage more women in the field. “This is a great honor. I will be happy if it encourages young female scientists and mathematicians,” she said. “I am sure there will be many more women winning this kind of award in coming years.”