Another week, another group of disgusting Hearthstone bosses to beat. This time, we’re here to help you through the Construct Quarter, which actually gives you four enemy heroes to battle against. That’s one more than usual, so … you know, you better watch out!

But don’t worry, adventurer! We’re here with another guide for conquering a wing in Naxxramas. You can learn what you need to know about the Construct Quarter, or you can find info on the rest of the (previously released) quarters below. Note that all these of strategies deal with the bosses on the Normal difficulty. 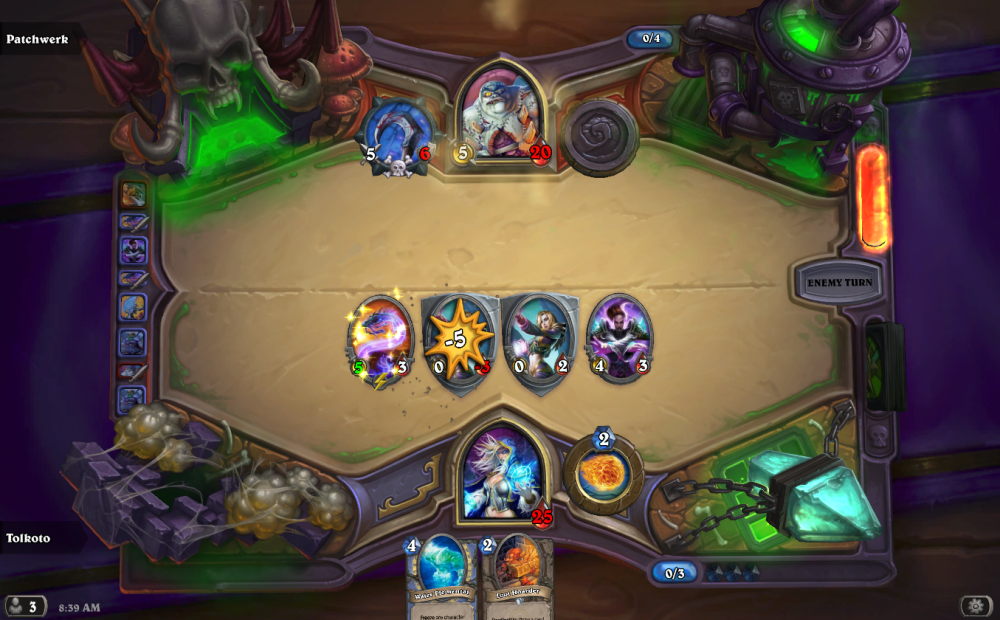 Above: He’s got a mean hook.

Patchwerk starts off with a weapon already equipped, his 5 attack/8 durability Hook. Even once it’s destroyed, the weapon’s Deathrattle puts another Hook into his hand (it only costs 3 mana for him to re-equip), so don’t bother trying to destroy the weapon with Acidic Swamp Oozes. His Hero Power is pretty intense. He can destroy any one of your minions once every turn for just 4 mana.

On the bright side, Patchwerk doesn’t draw any cards, so you only have to deal with his weapon and Hero Power. Your best bet is to use an aggressive deck (also called aggro decks by fans) that’ll let you play a lot of minions quickly so that his Hero Power can’t stop you from getting a decent collection of cards on your field. Weapons also work on Patchwerk.

However, Patchwerk will always try to attack your hero if he can. You can protect your hero with Taunt minions, but you’ll need more than one on your board at anytime. Otherwise, he’ll just use his Hero Power to destroy your Taunt before attacking your hero again.

Your best bet is to use a Mage deck with a lot of Freeze spells. When frozen, Patchwerk can’t use his weapon. You can also use the Mage’s Mirror Image spell to quickly put two 0/2 Taunt minions into play. Above: I’ll tell you the secret of the ooze.

Grobbulus
Hero Power: Poison Cloud (Deal 1 damage to all minions. If any die, summon a slime)

Grobbulus’ Hero Power does 1 damage to all minions and gives him a 2/2 Fallout Slime for each one that dies. It just costs him 2 mana to cast, so be careful about playing low-health minions in your early turns.

His collection of oozes can destroy your weapon, may have Taunt, and generally slow the pace of battle. You’ll want to use a control deck (what fans call decks that they design to outlast opponents) that can take care of all his tricks with spells, Silences, and stronger minions. Whatever you do, don’t leave too many cards with 1 health on your side, or you’ll be giving Grobbulus easy board control. Of course, you can always use area-of-attack spells, like the Paladin’s Consecration, to easily get rid of those 2/2 Fallout Slimes. 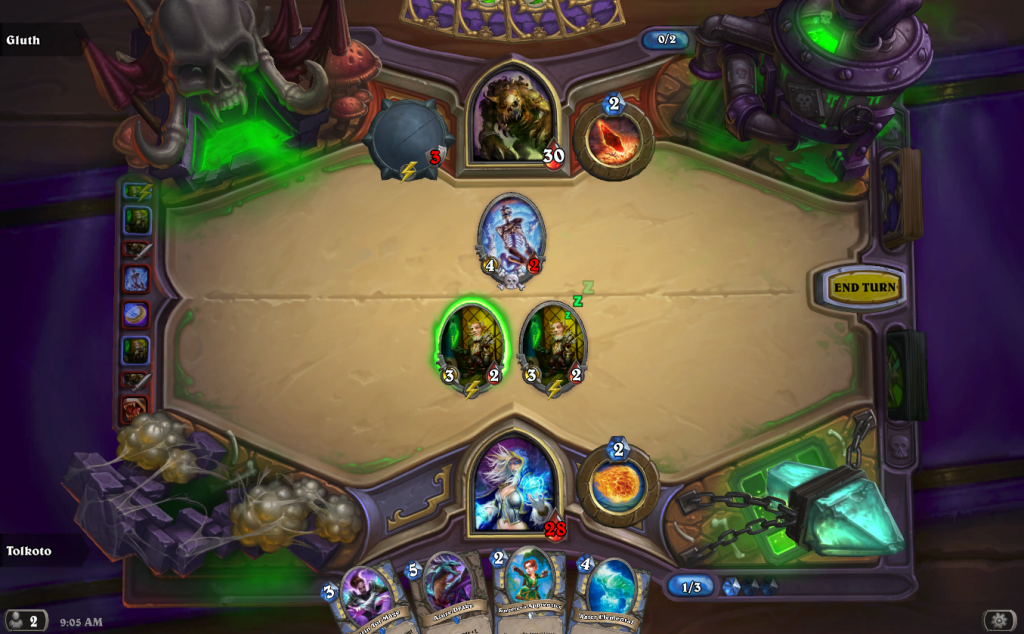 Above: The weak shall inherent the earth. Or Azeroth. Whatever.

Gluth
Hero Power: Decimate (Change the health of all minions to 1)

Gluth can equip a 1 mana weapon called Jaws. It only does 1 damage (with 5 durability), but it gains +2 attack any time a minion with Deathrattle dies. Of course, 1 damage is enough when he uses his 2 mana Hero Power to turn the health of all of your minions to 1.

You’ll want to play an aggro deck against him. If your minions don’t have that much health in the first place, his Hero Power can’t bother you much. You can also use Freeze spells and Taunts to keep his weapon out of play. Just make sure you don’t play any cards with Deathrattle, or else you’ll be upgrading his weapon for him.

Of course, he’ll play plenty of minions with Deathrattle himself. Keep in mind that it might be best to ignore them and focus on damaging his hero. However, he has a couple of minions that have Taunt and Deathrattles that deal damage to every character. Combined with his Hero Power, Gluth can easily clear the board, trigger a bunch of his own Deathrattles, and seriously upgrade his weapon.

You’ll want to use Silencing spells to put those Taunt minions out of play. You can also use Acidic Swamp Oozes to destroy his weapon. He’ll eventually equip a new one, but at least he’ll have to start upgrading it again from scratch. 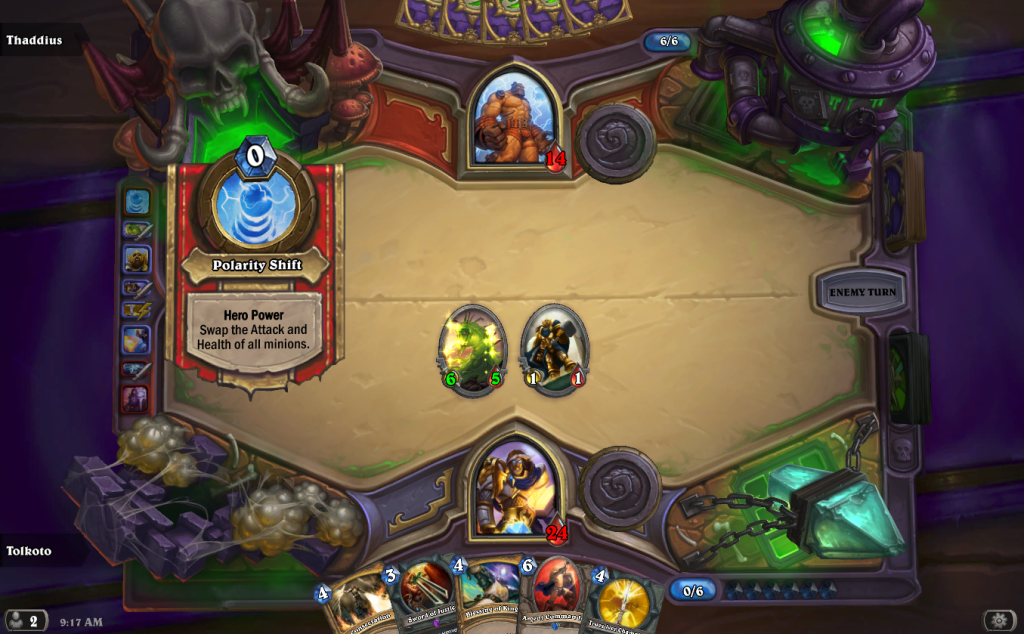 Above: Compared to Hero Powers than instantly kill your minions, this one isn’t so bad.

Thaddius
Hero Power: Polarity Shift (Swap the attack and health of all minions)

Thaddius can use Polarity Shift every turn (it costs 0 mana) to swap the attack and health of every minion on the board.

This is a weird but mostly gimmicky fight. His Hero Power can’t hurt you too much, especially if you play minions with relatively equal attack and health. You can even use it to your advantage with cards like the 0/2 Nerubian Egg, which summons a 4/4 Nerubian when destroyed. Polarity Shift will instantly kill the Egg since it turns its health to 0. Of course, Thaddius will use this trick himself, so watch out.

You can beat Thaddius if you just use a normal, smart strategy, preferably by trying to establish and dominate board control with a control deck. Just keep in mind that he will use Polarity Shift every turn and plan accordingly.